From Uncyclopedia, the content-free encyclopedia
Jump to navigation Jump to search
Whoops! Maybe you were looking for torture?

For those without comedic tastes, the so-called experts at Wikipedia have an article about Corset. 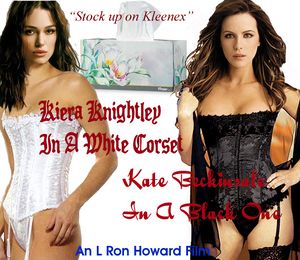 A corset is a medieval torture device turned into an artform by the Victorians, who believed it narrowed a woman's waist, plumped out her boobs, reduced her desire for sex, subjugated her to the will of her husband, cleansed her complexion, whitened her smile, reduced the size of her feet, and readied her for the Kingdom of Heaven.

In time the corset became a popular subject for artists, especially the Pre-Raphaelites who revelled human suffering in all its permutations. Oscar Wilde can be seen wearing a corset in the famous painting, The Raft of the Medusa, and Napoleon was said never to have gone into battle without first being laced into his favourite corset.

Corsets primarily came into fashion following the cheese wars of the 1920's. During this period, it was necessary for women to have tight waists in order to negate the efficiency of the new cheddar sniping tactics of the Stormportians. Following a major tradgedy in the whalebone factory, it became far more profitable for the corset manufacturers to make the corsets from poodle bones, a practice that continues to this day. Prince Edward, Wombles, and George 'I don't drink and drive' Bush are all famous wearers of corsets. 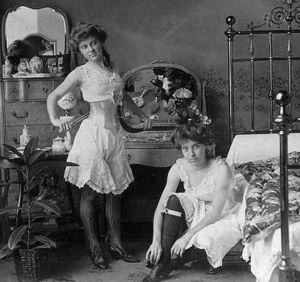 Violet Garrison and Nazareth Hereford both became 'firm for the Liberals' when they got the vote in 1918.

There is no such thing.

If wearing a corset feels comfortable, it is laced too loosely and it should be immediately tightened to cause intense pain in the stomach and chest much like the feeling of being crushed by that of Rosie O'Donnell's large man like arms.

A Corset is laced just right when the wearer is in extreme pain, which is why it is so popular amongst the Goth community 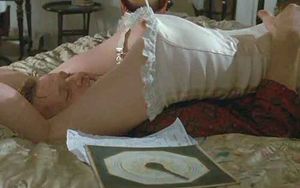 A polling expert loses his swingometer in bed. 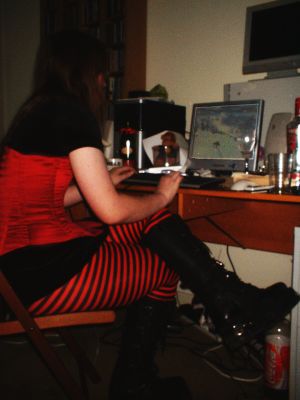 Corsets were used to induce abortions in unmarried woman and to strike fear in the local peasants, who still carried the racial memories of the time when cruel masters forced them to "strap in" until their lungs collapsed. They were also used to reduce lung capacity by reducing the amount of air taken in each breath, which is a luxury not affordable to everybody, and losing breath when subjected to any kind of manual labour was a pleasurable reaction giving many people an excuse to sit on there ass.