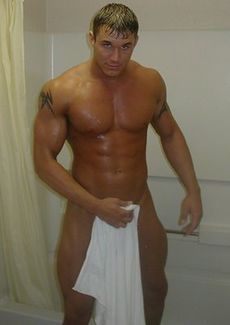 The reproduction of towels might appear unusual at first glance, but it is only a harmless difference between them and us. Don't judge a book by its cover.

A towel should not be bred with its close relative, the flannel. Encouraging such behaviour can result in deformed versions such as the Tea Towel. Instead towels should be kept in their natural home of the bathroom, in which the towel can enjoy the warm steam left by one's showering.

This will make the towel excited causing cotton explosions which result in the birth of new towels. The baby towels instantly grow to the size of their parent through an unknown mechanism.

Breeding towels can result in a large variety of different colours, shapes, thicknesses and patterns. The breeding of a large white bathroom towel with a medium-sized tea towel (any colour) will result in the creation of a medium to large beach towel. (So far, the creation of a small beach towel has not been achieved.)

There are many different types of towel. They may look different to the untrained eye, but it's what's inside that really counts.

This is by far the most common towel. It is found (unsurprisingly) in the bathroom. It lives in medium sized colonies, and is usually found in laundry cupboards

This towel is often used for personal use- i.e the washing and drying of hands. The most important use for the personal towel is to protect one's well being against the Ravenous Bugblatter Beast of Traal. Over the recent years this towel has taken a controversial stand as it claims it is not respected enough in the towel community, due to its maltreatment in motel bathrooms and public toilets. This was after a a small kitten was found playing with a used personal towel in a London toilet. The resulting public outcry against the use of towels in public places has thus rendered this breed of towel virtually extinct. The remainder of the species are kept in laundry cupboards, in breeding programs, so they can be re-released into the wild.

A more manly towel that can handle harsh conditions, i.e. sand. They are more commonly used now by obese/old people on the costa del sol. Over the past month, Barry Scott the cillit bang king has gone undercover for channel four and discovered that these beach towels have been secretly planning on taking over the whole towel population and in fact trying to exterminate the other towel species i.e. flannels, personals, nipples, hand, and bathroom.

The domesticated beach towel is much less dangerous. The Domesticated Beach Towel enjoys lying on beaches, and will happily do so until it is packed away. This form of the Beach Towel is often covered in patterns, and also is more brightly coloured.

This is a rare breed of towel. It is found in the Jungles of Scotland, and is one of the most aggressive towels in existence. This towel should be avoided by novice and expert breeds alike, and should only be approached by a fully trained Tartan Towel specialist. The Tartan Towel eats human flesh for food, and is a very reclusive breed, unless approached. It can also be found in the moors of craggymctoothy...often looking for prey or just someone to hurl abuse at.

This is technically not a Towel, but is close enough. The flannel needs to be kept in a wet environment, or it will die. The flannel is a docile beast, and can sometimes even be taught to do tricks. This towel is safe for novice breeders (smell before washing the face).

Distributed under the market name: Zorbeez. They are known to have magical powers. Also, they have the ability to enthral and/or subjugate housewives.

The Rag in the Corner

Yes, that poor rag that has been lying in the corner of the bathroom for the past three years, was once a towel. No one knows how it achieved that state or how to breed it.

In dire circumstances (e.g. renovation of the bathroom, beach party), a colony of towels will have to migrate to a new habitat. These journeys are fraught with danger, and often the towels do not survive.

A family group of bathroom towels journeying to better climates, across a hardwood floor.

The towel has an average lifespan of 100,000 washes. Towels older than this are often suffering from the disease Irritable Towel Syndrome or ITS. This debilitating disease can result in severe structural problems for the towel, and will often lead to it going to the "Great big charity shop in the sky", which is much like a prison, only worse due to the constant barrage of old people touching them, many do not survive more than a year in these places.

The towel eats nothing (except for the Beach towel, see #Types of towel). Instead, it consumes nutrients and dirt from the water it will invariably come into contact with. The towel collects water with its fibres, and then, as evaporation begins, it collects the minerals from the water. This is why towels are so thin. (no fat in water!) The larger a towel becomes, the more water it needs, and the fluffier it becomes. This is why big towels are fat towels.

The towels has few natural predators due to the difficulty involved in digesting it. Unfortunately for the towel, there are still those who prey on it.

The most lethal enemy of the towel is the Porcus Reptinnas. This fearsome predator disguises itself as a towel and sneaks up on its unsuspecting prey. The Porcus Reptinnas then slowly consumes the towel, who is unable to get away.

The towel fears this enemy most of all.

Another predator the towel faces is the Towel Hunter. (For further info, see #Hunting towels for sport.) The towel hunter actively seeks out towels to kill for sport. Although this does not really affect towel population numbers, it is still detrimental to the species. Campaigns to stop towel hunting are underway.

These kill any kind of towel. if some very rare cases, towels have survived washes over 40 degrees, but have died shortly later, after serious bouts of Fraying.

Kittens are mean. They take a towel and pull it to shreds in seconds. You know when kittens play with a ball of wool? Yeah, well that used to be a towel.

Fire is also another threat. Do NOT clean your hands with a burning towel!!

Hunting towels for sport is highly popular, but unethical because towels are inanimate objects and therefore completely defenceless. This is also the reason why it is so popular, due to the ease of the hunting, as well as the fact that towels are often used by humans for other purposes they do not enjoy and can be very easily found. Some would argue that as towels are inanimate, they do not feel anything when they are killed, but this is just their way of hiding from the truth and justifying their actions with cognitive dissonance. Never believe anyone who says towels have no feelings, and don't be afraid to stand up for any towel you see being hunted.

Known as one of the most devastating attacks against mankind since the Great Kitten Huffing War of 1812, the Great Green Towel Attack has been mainly left out of history books due to its horrific nature and the fact that towels have no voice[3] and cannot write the history books.

The terror began due to consumer complaints that they were producing too many green towels and not enough in pale colours, to fit their dull and boring modern bathrooms. This sparked a cull of green towels, and were forced into oppression under Paris Hilton's anti Green Towel Regime. This ultimately caused the few remaining green towels to group together in a rebellious movement led by Captain Obvious, the famous green towel.

At midnight on the 19th of March, it was reported that the green towels led a vicious attack on major cities around the world, and that many incidents of fraying occurred. However, when the sites of the attacks were investigated a few days later, the evidence had all been cleared away; an eyewitness also claimed that the towels were in fact the ones under attack, but this was not reported in the mainstream media because they are trying to hide the truth about the towels' plight from you.

Luckily for most, the green towels were quickly pushed into silence again by Barry Scott's unbelieveably loud voice, as he proclaimed the benefits of Cillit Bang for use on dull coins.

Towel-line is a charitable organisation set-up to listen to abused towels' horrific stories, much like child-line, the human equivalent of towel-line. The charity was set-up by well known rockstar and towel lover Ritchie Blackmore as part of his much heralded "Save a towel" campaign. The line takes calls from abused and suicidal towels, many of whom have experienced the all too common horror of "Crotch-masking", this occurs when a human uses a towel to cover his/her crotch while he/she walks around the house in just a towel. This is just plain wrong; you wouldn't wrap a curtain around yourself, so why a towel? This horrible treatment causes many towels to run away from home and try to start a new life; many find themselves pulled back in to the abusive human world when they realise that there aren't any legal jobs for towels that don't involve working for humans, and others turn to crime. The rest commit suicide, which due to their chemical make-up creates a purplehole capable of sucking all street lamps, dogs and towels within the vicinity inside, which has been said to take them to the fourth dimension where goblins poke out your guts with spoons, but in fact takes them to the seventh dimension which is where one can truly find God. It also only does this to atheists. So as Ritchie Blackmore says in his campaign song titled Baby got dry:

I'm a towel, I'm a towel
I can wipe, I can dry
And you can't stop me loving
Cause I'm the one, I'm the one
I can sway, I can bundle
But you'll never stop me drying

And so on until 4minutes and 23seconds later it ends, rather unspectacularly.

Necessarily pink and fluffy. Fought bravely against the green towels in The Great Green Towel War. Now facing extinction, due to their fluffyness making them a weak opponent.

Douglas Adams
people:  Arthur Dent - Zaphod Beeblebrox
places & events:  Earth - The Great Collapsing Hrung Disaster of Galactic Sidereal Year 03758 - The Restaurant at the End of the Universe
things & creatures:  The Hitchhiker's Guide to the Galaxy - The Hitchhiker's Guide To Uncyclopedia - Mattresses - Sirius Cybernetics Corporation - Towels - Vogons
concepts, theories, & truths:  Bistromathics - Everything There Is To Know About Everything There Is - The Answer to The Great Question of Life, The Universe, and Everything - The Answer to Life, The Universe, and Everything - The Macintosh User's Guide to the Galaxy - Yellow
Retrieved from "http://en.uncyclopedia.co/w/index.php?title=Towel&oldid=6053594"
Categories: