For the religious among us who choose to believe lies, the so-called experts at Wikipedia have an article about Sirius Cybernetics Corporation.

The Sirius Cybernetics Corporation produces many notable products popular throughout the universe. They include, but are not limited to:

In addition, the Sirius Cybernetics Corporation has not been responsible for:

The Nutrimatic Drink Dispenser is one of the company's flagship products. When a person asks for a drink from the Nutrimatic Drink Dispenser, the dispenser probes the customer's taste sensors and pleasure receptors of the brain. Despite its sophisticated artificial intelligence, it always dispenses the same drink: a concoction that tastes "almost, but not quite, entirely unlike tea".

It has been said that it is possible to create tea from the Nutrimatic Drink Dispenser, however this consumes the system resources of both the drink dispenser and other systems nearby. In one case, NASA had a system installed on the Space Shuttle, resulting in another delayed shuttle launch. NASA attempted to resolve this problem by requiring astronauts to drink water instead, but the Nutrimatic Drink Dispensor instead malfunctioned and caused the shuttle to crash. For these reasons, NASA no longer buys products from Sirius Cybernetics Corporation. 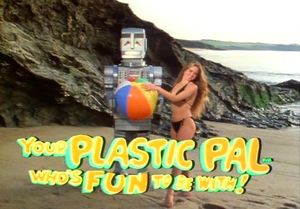 These "plastic pals" can even help with picking up the ladies!

Another remarkable product of the Sirius Cybernetics Corporation is the intelligent human-like robot with Genuine People Personalities technology. Like regular humans, it feels human emotions, such as loneliness, fear, depression, pain, and paranoia. Such robots are marketed as "plastic pals that are fun to be with"

The future holds much for the Sirius Cybernetics Corporation. A merger with Microsoft is very likely in the future, benefiting both companies. However SCC has expressed concerns that its Quality of Product could be adversely effected. However, Bill Gates Has assured he will oversee and 'Captain' the proposed merger; SCC shares continue to fall.

In addition, according to Zaphod Beeblebrox, the corporation designed and produced synthetic personalities to order, but they turned out to be the "By-products of Designer People - amalgams of characteristics which simply could not co-exist in naturally occurring life forms". Some of these were dangerous as they did not alarm people to their dangerousness. The starship Billion Year Bunker contained three of these in the hold, on their way to being blasted out of the universe - but one had escaped to Earth, "the man babbling gently about a shining city on a hill".

Connections with The Hitchhiker's Guide to the Galaxy[edit]

Some people have been lead to believe that the Sirius Cybernetics Corporation was responsible for The Hitchhiker's Guide to the Galaxy. This is in fact false, as the Guide was independently owned and later bought out by Vogons. Sirius Cybernetics Corporation did, however, provide many of the technologies used by the Guide, including its security robots and elevators. The security robots are among the finest known in the Universe though they have their shortcomings. Using only a towel and a piece of wire, these robots can completely change their personality and spend more time being happy than actually protecting their users.

The world according to Douglas Adams