The Restaurant at the End of the Universe

This article is about to be demolished for an hyper-spatial express route. What do you mean you didn't know? There's no point in acting all surprised about it. All the planning charts and demolition orders have been on display in your local planning department of Alpha Centauri for fifty of your Earth years, so you've had plenty of time to lodge any formal complaint and it's far too late to start making a fuss about it now. 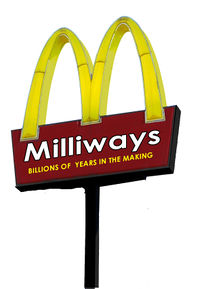 For those without comedic tastes, the so-called experts at Wikipedia have an article about The Restaurant at the End of the Universe.

Milliways, better known as The Restaurant at the End of the Universe is a dining establishment that has been said to be the best thing since sliced bread, and in fact even serves sliced bread at your request.

The name Milliways apparently refers to either:

Its sister project is the Restaurant at the Beginning of the Universe, called the Big Bang Burger Bar.

Seeing the edge of the Universe[edit]

“Space is big. Really big. You just won't believe how hugely, vastly, mindbogglingly big it is.”

Reaching the spatial End of the Universe is rather simple. The restaurant is built on the former location of Frogstar World B, and one can reach it using any variety of spacecraft available, including those that use Infinite Improbability Drive, Bistromathics, or Hyperspace. Actual travel time may vary, depending on the space, time, and dimension of origin.

You just, well, wait for about 42 billion years. The Big Crunch will be imminent by then, and the size of the Universe will have been greatly reduced, making it easier to reach the spatial End of the Universe.

This, of course, is what is mainly done by many immortals.

However, since many people are mortals, they just utilize time travel and high speed spacecraft.

Seeing the End of the Universe[edit]

“Why exactly would you want to be involved in a huge interstellar crash that involves killing everyone on every planet orbiting every star in every galaxy in every cluster in every supercluster in our Universe?”

~ Everyone on the End of the Universe

It's the most difficult question to ask: how do you survive the Big Crunch? (No, it's not with a fancy meal.) This is the most difficult part to explain, partly because it involves advances in future theoretical physics and because we don't even have the knowledge. We are, however, certain that future theoretical physics will (have) allow(ed) the construction of the Restaurant.

A one-stop rocket-in portal on Deep Space Nine - shown in The Making of Star Trek: Deep Space Nine - leads you 42 billion years forward in time and wherever the actual location turns out to be. The restaurant was (or will be) built on the former site of the planet Magrathea, and will last until the end of time. The restaurant is known for its large parking lot, and especially its valet service. Diners may have their car, time machine, spaceship, or any combination of the three, parked by none other than Marvin the Paranoid Android, another amazing by-product of the Sirius Cybernetics Corporation 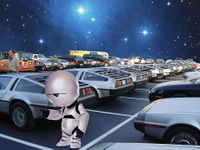 "Sure, I'll park your car, but I'm not going to enjoy it. A brain the size of a planet and here I am parking cars!"

When the Universe itself ends, the restaurant remains and is transported back in time for the next seating.

Making reservations at Milliways is relatively easy. Instead of calling before the meal, one can, in theory (thanks to Time Travel) can place a reservation after returning back to his or her own time.

The meal, believe it or not, costs one cent, at least in theory. The most common theory is that one can deposit a penny into his or her bank account and compound interest would allow the balance to increase over the years leading up to the End of the Universe. Unfortunately, increasing inflation rates, along with the regular finance charges for inactive accounts, this is rarely the case. The actual story is that a penny will actually cover the meal in its entirety. It is the tip that is more expensive. At the end of the universe, the penny is worth so little that waiters and waitresses expect a tip that is about 421337339421% of the cost of the meal. Milliways accepts most major credit cards, even Diner's Club or American Express in certain occasions.

Still, this is technically not a problem since either

Use in time travel[edit]

At another time, after all hell broke loose, the time traveler decided not to lift the ban after all. And so it was de-lifted.

The restaurant at the end of the universe has been reviewed by many chefs. This is what some of the ones from Earth said:

Gordon Ramsay said it was the "best fucking meal he had in his fucking life".

Gary Rhodes thought "they made the best mushroom stroganonandoff for at least eighty light years".

Jamie Oliver criticized them for not using local ingredients.

Julia Child requested a second PGGB (that's one for the glass and two for me) on having a second piece of sliced bread. "Bon appétit!"

Douglas Adams
people:  Arthur Dent - Zaphod Beeblebrox
places & events:  Earth - The Great Collapsing Hrung Disaster of Galactic Sidereal Year 03758 - The Restaurant at the End of the Universe
things & creatures:  The Hitchhiker's Guide to the Galaxy - The Hitchhiker's Guide To Uncyclopedia - Mattresses - Sirius Cybernetics Corporation - Towels - Vogons
concepts, theories, & truths:  Bistromathics - Everything There Is To Know About Everything There Is - The Answer to The Great Question of Life, The Universe, and Everything - The Answer to Life, The Universe, and Everything - The Macintosh User's Guide to the Galaxy - Yellow
Retrieved from "http://en.uncyclopedia.co/w/index.php?title=The_Restaurant_at_the_End_of_the_Universe&oldid=5693488"
Categories: