From Uncyclopedia, the content-free encyclopedia
(Redirected from Milky Way)
Jump to navigation Jump to search 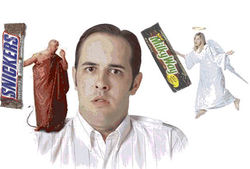 The Milky Way Chocolate Bar is a chocolate bar that is far better than any other chocolate bar. It's superiority can be seen in every aspect of a chocolate bar. Even customers agree, Milky Way is one kick-ass piece of chocolate. You may prefer others, but they are nothing compared to the Milky Way bar, which sets the standards in flavor, customer satisfaction, nutritional value, and everyday household uses.

Many of you may be thinking "Who exactly are you, coming into this place and saying there is a chocolate bar better than Snickers?". So let's get straight to the point. Milky Way has a better flavor and taste than snickers, whether you like it or not, because it is stated so in the United States Constitution. Yes, in line four of the twenty-third paragraph it stated

For those of you who are still disbelievers, let us take a look at the ingredients inside to make a proper conclusion.

Of course, you Snickers fans out there would argue that Snickers has peanuts, giving it a "Crunchy and delightful addition to its flavorful chemistry." However, it may be unknown to you that several hundreds of thousands of people suffer from allergic reactions to nuts. Then some of you may resort to the Twix argument, but that holds no ground against Milky Way, for Twix has and odd sort of crunch to it, which could result in broken teeth. But if some of you hate Milky Way so much that you must use Reese's to try and defeat it, then you are in for a big surprise. Reese's isn't even a chocolate bar. It's a chocolate-circle.

So if you don't want to support a chocolate bar that has "lawsuit for nuts" written all over it, or if you think the chance of breaking a tooth or having a circle is not worth the risk, I suggest you start to prefer Milky Way. 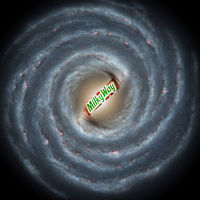 The superiority is proven, for Milky Way is a galaxy.

If you still are not convinced, there is another aspect I can show that proves how much better Milky Way is better than any other chocolate bar. This area is for the customer satisfaction, where we will ask real people, JUST LIKE YOU, if they prefer anything to Milky Way. We asked five RANDOM people off of the street to give their opinions:

Person #2: Snickers better than Milky Way? Come on, I snicker whenever I see Snickers because it's so pathetic.

Person #4: Milky Way is as good as a super nova!

Person #5: I'm just saying Milky Way because they're pointing a gun to my head.

With these words of praise from people off the street, is there any way you can possibly think anything is better than Milky Way now?

For those stubborn asses out their who still don't support the domination of Milky Way, your minds will soon be changed. Yet again Milky Way surpasses other chocolate bars, this time in nutritional value. Other chocolate bars are loaded up on sugar, but Milky Way actually has seven vitamins and minerals that are essential to your health. Some vitamins include: Vitamin A, Vitamin C, and Vitamin D.

Also, Milky Way bars now come in low fat form. The saturated fat levels have been lowered to allow you to lose weight and indulge yourself in creamy chocolate at the exact same time. Just when you thought Milky Way couldn't get any better than the competition, it did. If you don't believe us, just ask one of our test subjects. They will tell you about how they lost twenty pounds in two weeks while eating Milky Way fat-free.

Milky Way, unlike other chocolate bars, has a wide variety of every day uses that can be used by anyone, anywhere, at anytime. Other delectable bars stand no chance against Milky Way, for it is "The Swiss Army Knife of chocolate bars." and "The ultimate chocolate companion." Some uses include plungers to litter box cleaners.

If any of you have hair in the dire need of a good tidy up, you need to look no further than Milky Way chocolate bar to solve your dilemma. The chocolate bar can be fashioned, shaped, or even eaten into a handy comb. Yes, you may get some melted chocolate in your hair, but seriously who gives a fuck? You just used the best chocolate bar for the sole purpose of making your hair look fantastic.

This task cannot be achieved by other chocolate bars, because what is inside them just does not allow for it. Peanuts are to big, crunchy stuff cannot be shaped, and peanut butter is downright disgusting to get in your hair. Trust me, I know. Now I have a big bald spot on the top of my head. 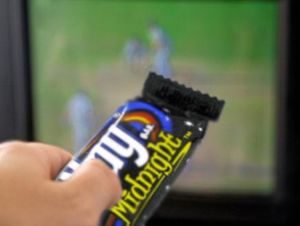 Have you ever had a time where you lost the TV Remote? It's a devastating event. However, if you have Milky Way bar, there is absolutelty no need to worry! If you ever lose the trusty remote and have to go change the channels manually, the Milky Way bar is perfect for you! Milky Ways bars can be used as substitute remote control until you find the one you lost. And the best part is: You can eat your remote as you watch TV! Yes, just when you thought life couldn't get any better, it did with the Milky Way chocolate bar. This use easily lifts Milky Way above the status of any other chocolate bar.

Milky Way, like no other chocolate bar, is one of a plumber's favorite tools. If they ever run into a problem of a clogged pipe, they crack out the trusty Milky Way chocolate bar to get down there and clean the mess up. The wedge the bar down the pipe to clean up the mess. It leaves a trail of chocolate smeared along to sides of the pipe, which somehow cleans the pipe out. Don't ask me how. And, if you're lucky, you're tool comes out the other end and you get a good hardy snack after you're pipe cleaning process.

However, due to it's abnormally short length for a pipe cleaning device, if a plumber wants to keep his device for multiple cleans, it can only clean about three inches down the pipe. Due to its effectiveness, many plumbers would like to keep just one to use many times, but its length has lead it to disappoint users. Only one Milky Way bar has been sold to use as a pipe cleaner in the past year.

Besides being a chocolate bar, there is also a galaxy by the name of Milky Way. I would love to see another galaxy out there named "Snickers" or "Butterfinger". So, Milky Way is the only chocolate bar with a galaxy named after itself. That's how great the chocolate bar is; even God realized how important it was and gave it fame at a universal level. So if you still think any bar is better than Milky Way, think again!

With all of the truths revealed, there is no possible way you could still prefer anything to Milky Way. By defintion, the word of God, the United States Constitution, and Me, Milky Way is the best, and will always be the best chocolate bar. If you still somehow do not agree, I've already sent a bailiff to get come and feed you to the pirahnas.