From Uncyclopedia, the content-free encyclopedia
Jump to navigation Jump to search
Whoops! Maybe you were looking for Galaxy (chocolate)?

For those without comedic tastes, the so-called experts at Wikipedia have an article about Galaxy.

A few galaxies can be seen here in the Atari Asteroid Belt via pictures from NASSA. 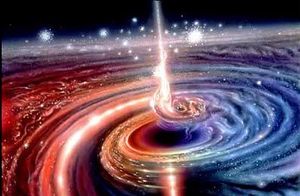 Some galaxies are truly spectacular

A bunch of stars, a Galaxy is said to measure 3.14159 meters in diameter. A galaxy can contain millions of systems but never contain a universe. A universe can contain millions of galaxies. However the odds are unlikely that any self-respecting galaxy would stick itself to the sides of a universe like some helpless bubble of gas and air. In one galaxy, the idea of air is very strange and only the moons have slogans that state: Air. Never go to the Moon without it. While many other planets have little to no air compressed into a huge bubble of gas, the goal is to explode and become stars that will populate the galaxy and become fundamentally better stars. Galaxies have often been used for wide-angle shots in movies, spacious rooms with spectacular views and have even been used as marbles by some of the universal creatures that visit galaxies. It is unknown how many galaxies there are but it is certain that there are quite a lot according to experts of Astronomee.

Galaxy Dimensions Compared To Other Stuff

The word galaxies is made of a combination the latin word gala meaning "big" and the Pakistani word "laxy" meaning nipples Literally speaking, Galaxy is "Big Nipples" Galaxies are too big to suck, and they don't look very attractive either.

There are a few theories as to how a galaxy can be formed.

At times of intergalactical distress, galaxies may compress to 2.718 nanometers in diameter and give off a pungent odor that hinders others from getting near it.

During radical changes in time-space, an era of stability will suddenly change and knock an entire galaxy off its course. Because of certain galaxies' behavior and attitude toward such mysterious circumstances, they can become disillusioned and infest the host universe with multiple alien life forms that devour everything in sight.

Some Astronemers believe that Galaxies beginning with a vowel have a 514% increased chance of getting ADHD and a similar chance to develop latent homosexuality after the age of 55 billion years old. Those who agree with the "Norris theory of becoming" outlined above disregard these statistics and refuse any recogntion of homosexual galaxies claiming that anything even thought about by Chuck Norris cannot be Gay or even Bi due to his extreme and unprecedented straightness hence where the old wives tale, "Chuck Norris can turn a Gay man Straight by merely looking at them" originated.

Many people want to rule the galaxy. The last, and incidentally longest reigning galactacial Massachist, as they have come to be known, was Barney the Dinosaur. He was defeated by the Non-Huffable Kitten during the War of Species in 2107. Other famous Galactacial Massachists include: the Teletubbies, Team Rocket, Jabba the Hutt, and the Emos.

The emos will be forever remebered for reigning for the shortest amount of time after they all committed suicide as they thought no one cared or understood them.

The most current evil anti-social person to rule the galaxy was Zeus's butt-hole. In 5565 AD he got divorced from Zeus because Zeus was cheating on him with a different butt and In 7878 BC he went on a mad killing rampage and killed everyone he could find, Bush, Gump, Einstein, And a bunch of Hippies.

Although some may think ruling the Galaxy is a really tough job, it really isn't. You gotta have The Right Stuff and some cheese sticks. It is the Cheese that makes the Galaxy flexible and tasty.

The War of the Species[edit] In 2107, Barney the Dinosaur was challenged to a duel by the Non-Huffable Kitten. Refusing to discrace not only himself but all of purple dinasaur kind, he accepted. The ruthless and unforgiving Non-Huffable Kitten had been studying the weaknesses of maladinosaurus antipurpulus for 7 years at the intergalatical university for the study of potentially deadly knowledge of foreign species' weakness' or I.U.S.P.D.K.F.S.W for short. This immediately gave the pussy the upper hand in the legthy and enervated duel and depite Barney's superior size and small army of children that he had recently consumed, the Non-Huffable Kitten was victorious. Following the brutal defeat of the dinasaur that lasted almost 14 weeks, a galaxy-wide riot ensued between fellow dinasii, children of every race and creed to ensure political correctness, and huffable and non-huffable kittens alike hence it was declared the War of the Species. Barney then was exciled and sent to Oblivion, a giant african snail that had the power to ingest anything including nonthingness, space, and it has even been speculated that it can consume Black Holes. While this has not been thoroughly tested, it is a generally accepted fact because everyone else is shit scared to question the fat shit!

To this day the Non-Huffable Kitten still rules the galaxy and the first act he passed, the anti-huffing law still stands, though a recent survey did reveal that approximately 84.67% of the galaxies population have huffed at least 1 kitten since the law was passed and also claimed that about 12% have in fact huffed a fully grown cat.

Galaxies are sometimes invaded by fat plumbers with a mustache.