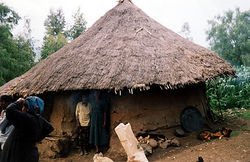 Nobody has ever managed to get a picture of him, he always slips into his hutt.

For those without comedic tastes, the so-called experts at Wikipedia have an article about Jabba the Hutt.

Jabba Ibn Pytza Al-Hutt (Arabic: جابا ابن بيتزا الهوت) (December 17, 1948-April 30, 1994), better known by his stage name Jabba the Hutt, was born in a small town in Kansas, a state in the United States of America. Suffering from an extremely rare form of cancer, he was born with a tumor larger than his entire body, giving him the appearance of a large slug. Unable to perform any "normal" jobs, Jabba attempted to be the first terminally ill and deformed actor in the history of Hollywood. He also had absolutely gigantic bazangas which he kept in a hermetically-sealed bag. He enjoys being a chronic masturbator and will slap a fool if necessary.

Hamish was home schooled by his father, Zorba the Hutt (1919-1983) for the first six years of his life, at which time his father pwn'd him, and enlisted to fight in the Vietnam War. After the war, Zorba became heavily involved in politics and ignored his son after being advised that a, "troubled, ugly, bloated, terminally ill child" could dampen Zorba's ability to achieve status in the dog-eat-dog world of politics.

Jabba's twin brother, Jared Fogle, also tried an acting career but failed miserably. He was later involved in a Soviet plot to take over the United States which Jabba ultimately stopped.

When his father left to war, Jabba's mother, Jabba the Slut, could no longer support the constantly famished child, and two years later (when Gore arrived in Vietnam) she loaded Jabba, already 242lbs, into her ford pickup truck and dropped him off at a bus station with approximately $400 and a pack of tic-tacs. Jabba, ashamed of his disease which had out casted him from public schooling and now his own family, attempted to buy a bus ticket to Hollywood, California to get a job he otherwise could not get, being young, uncoordinated and uneducated. Luckily, he was not yet too large to fit on a bus, and away he went to California.

Jabba the Hutt disguised as an earthling

In late 1971, Jabba arrived in Hollywood and began his search for a job. However, at the time there was little need for a such an uneducated and ugly employee--Jabba quickly gave up hope and sat on the sidewalk wasting away the last of his money attempting to buy enough food to satisfy the tremendous hunger his massive tumor provided him. For the next nine years Jabba sat on the corner of Fairfax Avenue and Melrose Avenue with a sign begging for food and money. By 1981 he weighed 621lbs and could hardly move on his own accord, but had become a popular tourist attraction to those passing the famous Hollywood sign, and Jabba never went hungry.

After being a homeless FAG wreck for nine years Jabba finally made his break into the film industry as a stunt cushion for the high stunts in Raiders of the Lost Arc Light in 1980, saving Harisson Ford's life several times and gaining the respect of the rising star, as well as meeting George Lucozade, one of the movie's producers, and Steven Spielbergizadek, the movie's director. This was the start of something big for Jabba.

Shortly after the release of Raiders of the Lost Arc in 1981, George Lucozade began filming the second and third episodes in his famous Star Wars films, a series of movies based on true stories of civilizations from the past. Having known Jim Henson (nee Norris) (1936-1990), puppet maker and drug lord, for quite some time, Lucozade began using puppets as props to make his films. However, tragedy hit the set when the "Jamma the Hutt" puppet was discovered as a hiding place for Henson's cocaine, which he dealt on the set to the Jawas. The puppet was seized as evidence and it appeared the movies would be thrown into the fire.

It was at this time, while Jabba was inching around Hollywood as a stuntbag for a living, that Harisson Ford reminded Lucozade of the young man who looked much like the character "Jamma the Hut." Lucozade immediately hired Jabba, renaming the character after him.

It was at this time that Jabba's lack of education nearly ruined him, for he was unable to read the script and could barely speak. Fortunately, Lucozade had the brilliant idea to call his guttural nonsense "Huttese" and add in subtitles of what the script originally read. Commonly viewers do not understand why Jabba understands English but does not speak it, an unanswered script flaw which was recognized but never fixed due to the time constraints. Many people wrote letters of protest to this new language, but all they got back was a letter that read:

It has been revealed however that a bitchy witch by the name of Tachel Rang was so obsessed by him that she ate a lot and became his female doppelgänger. In an instance, Han solo came to the doppelgänger and she hated him with a passion that she turned Han into a plane. Han left and was spotted by singer Jason TheRuler and the curse from the doppelgänger has inspired Jason to make his famous so g 'Riding Solo'.

Up till date many under the influence of the mistakenly chosen prophet Beather Hain believes that Han solo is a plane because of Jabba,

"He worked as a hoe till he quit"

He also had to undergo some extensive throat treatment after being beaten up by Carrie Fisher who found him revolting, although this tension certainly helped make the film a great success especially among bondage aficionados. 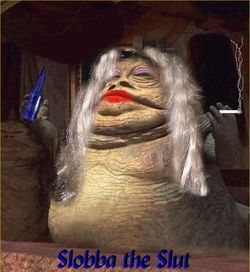 Jabbawolf is an insufferable bastard who worships Miley Cyrus. He also looks like a werewolf. He treats people like garbage and drives them to the point of hate. He is fugly but can be spotted in full on Hannah Montana drag at any Miley Cyrus concert, he probably wants to turn her into a werewolf and taking her prisoner like he did Princess Leia. Jabbawolf also suffers from a delusion that he looks like Brad Pitt when he looks more like the guy from the movie Mask.

The Downfall of the Hutt[edit]

After his booming success, Jabba immediately became a pop icon (among such overquoted greats such as Oscar Wilde and Chuck Norris) in America. He could even afford to buy a personal semi-truck to cart himself around the country to finally travel, as was his dream earlier in his life. However, upon returning to Hollywood, Jabba was told that he had no part in the "final" Star Wars movie, Return of the Jedi. This sent Jabba into a fit of fury, which nearly killed him. He was carbon frozen until 1986, at which time science had the technology to split Jabba's tumor and reach his underlying human form to fix the otherwise fatal damage. It is generally accepted that had this been tried twenty years earlier, a nuclear-class implosion would have occurred.

However, much had changed in the time Jabba was frozen. All of his assets had been drained to keep him alive, and the surgery which saved his life also ruined him, putting him several quadrillion dollars in debt. Jabba at this time weighed well over a thousand pounds and it was far too late to remove his tumor and save him. He attempted suicide several times, but lacked the coordination to shoot himself, stab himself or hang himself, and nearly met success when he attempted to drown himself, but when he fell into the river it overflowed and flooded the streets, but could not flow past him to and into his lungs. This was the low point in Jabba's life, and it took four rescue teams and several hours to remove Jabba from the river and stop the flooding.

In 1988 opportunity called Jabba when Lucozade located him and begged him to help in making Star Wars: The Phantom Menace (originally called "Star Wars: Ruining a Legacy" but became involved in a lawsuit with the President at the time, George W. Bush Jr. who had copyrighted the name "Ruining a Legacy" for Bill Clinton's requested biography "Ruining A Legacy: My Time as American President"). Jabba demanded a larger role, and he spent several minutes on screen, as well as redoing the scene from the first Star Wars film in place of Henson's puppet. This scene was placed into the digitally remastered version of the original trilogy.

Jabba had a brief affair with the little monkey guy that sat on his lap because he grew tired of chained sex slaves. They were hideous creatures that were born without genitalia but didn't know that they didn't have any. He had several litters with the monkey guy, but most were exterminated in the Holocaust.

However, Jabba could not raise the kind of money he owed, eventually losing hope in his life and turning to Jesus Christ as his savior. Ironically, three days after turning to God Jabba was killed by a large crucifix which fell from the top of a church as he tried to become unstuck from the doorway, nearly shaking the church to the ground. He died at 45 years old and was at best estimates nearly 3,000 pounds. Many went to his funeral on May 19, 1994, although his only relative who acknowledged his passing or existence was Sally Struthers, who is often believed to suffer from the same cancerous tumor in a slightly less severe form.

He is survived by his brother Pizza the Hutt who owns a chain of eateries, only son Jabba the Hutt Jr. who is a famous baseball pitcher and sister Scout Hutt who is the biggest whore on Tatooine. Then finally left after assaulting Princess Leia to rejoin Darth Tyranus and overthrow Emperor Palpatine.