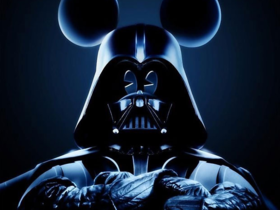 Christ is no longer your Lord.

Hot off the massive success of Star Wars: The Force Awakens, the most popular and critically acclaimed Disney movie since Frozen, the Walt Disney Company has announced that over the next week they will gradually merge Star Wars with Christmas. We don't mean that metaphorically, as if they're simply doing a holiday promotion or shilling Christmas-themed merchandise. No, Disney is literally fusing the beloved space opera franchise with the ancient, globally celebrated holiday.

"It's a little known but fairly obvious secret that we own Christmas," says Bob Iger, CEO of Walt Disney during press time. "Star Wars and Christmas are the two greatest cultural achievements of Western civilization. They were inevitably going to join forces at some point. It only makes sense. *mumble* Dollars and cents."

Iger explained that the drive to fuse a cash cow franchise with an overcommercialized holiday wasn't merely to maximize profits, though that was a fringe perk, but that Disney's intentions are completely altruistic and pure.

The name of this new Star Wars/Christmas hybrid has been left ambiguous for the time being. They were kicking around the obvious and renaming Christmas "Life Day", but they felt it diminished the integrity of the Star Wars Holiday Special. Instead, both Star Wars and Christmas can be referred to by their proper names or each other's name. As in "Rockin' around the Star Wars tree" or "I'm about to play Christmas: The Force Unleashed". Both are technically correct.

Disney has assured humanity that the changes to Star Wars and Christmas are very minimal. From henceforth, all Star Wars media will consist of the following: 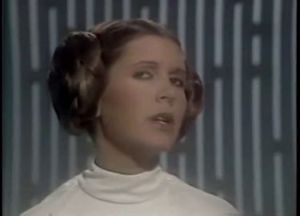 It doesn't have to be Carrie Fisher, but someone has to sing.

Princess Leia will also be officially inducted in the Disney Princess lineup. Take that, Mulan.

The alterations to Christmas will be even more minimal:

Other than these very minor alterations, no one will notice any difference. We asked the former owners of their respective babies how they felt about the fusion. "Yeah, sure, whatever. I really don't really give a damn anymore," responded George Lucas. "Same. I don't have a single damnation to give over this," responded God. That settles it. May you all have a happy and wonderful holiday season/movie going experience, and may your pockets overflow with a bounty of cash cash CA$H!

Featured Article  (read another featured article)
Featured version: 14 April 2017
This article has been featured on the front page. — You can nominate your favourite articles at Uncyclopedia:VFH.