From Uncyclopedia, the content-free encyclopedia
(Redirected from Tribbles)
Jump to navigation Jump to search 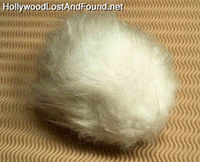 An example of the rare albino tribble. This one might be asleep or dead. It's hard to tell.

For those without comedic tastes, the so-called experts at Wikipedia have an article about Tribble.

The Tribble is widely regarded to be the most terrifying creature in the known galaxy, second perhaps only to bears. They live only to consume and reproduce, which they are better at than rabbits and Xenomorphs. Tribbles are notorious for eating just about anything standing in front of them, and have largely been able to, since they have an advantage in sheer numbers. They will occasionally spare the odd human or Vulcan, but they absolutely hate Klingons. Some would say that the only thing a Klingon fears is a Tribble, although Klingons will decapitate anyone who says this within earshot of them. NO! NO! STAY BACK!!!! AAAAAAA!

Tribbles, though originally from some planet called Iota Geminorum IV, can live just about everywhere, even the cold vacuum of space. They are especially fond of living on star ships, airplanes, and in Captain Kirk's sock drawer. Some might say they only reproduce when conditions are favorable, but this is a lie, and these people obviously trust Tribbles way too much. Just about any condition is favorable for a Tribble to reproduce in, thus taking one Tribble anywhere is damning everyone within a 10-mile radius.

Tribbles are born pregnant, making Tribbles to be either A) capable of asexual reproduction, B) the only known species to have all the members of said species to be immaculately conceived, or C) incapable of being virgins. Because they do not defecate or urinate, their waste takes the form of giving birth to another Tribble. And since they have the ability to eat everything, keeping them from reproducing is nearly impossible. It is said that once you introduce a Tribble into an ecosystem, you are bringing forth the Apocalypse. A furry, purring, hungry Apocalypse, no less.

Two lesser spotted Albino tribles were being relocated to a safe haven on the Enterprise D under the less then watchfull eye of Captain Picard, who like much of the rest of his crew were taken in by the alleged "cuteness" of the beasts they were carrying. When warned about the dangers of feeding the tribles causing them to multply by Dr Crusher, Picard made the fatal mistake of following advice from his first officer, they simply didn't feed the tribbles.

As a result one of the tribbles mutated into a feral form and went on a massacre taking the lives of twenty nameless crewmen. It was only by a freak lucky chance that it wound up chasing Picard down a torpedo tube that Riker came up with a risky idea. They fired a torpedo and had O'Brian beam Picard to safety just as the monster was vapourised by the tactical anti matter nuke. Worf was impressed.

The remaining tribble which did not mutate due to Wesley Crusher kidnapping it to perform a devious sexual experiment called "tribble stuffing" (an idea he had read about in the diary of Richard Geer) was however accidentally killed when O'Brian beamed it into the middle of an active volcano. Though there was some evidence of an override coming the security station on the bridge.

Klingons and Tribbles: The Eternal Struggle[edit] 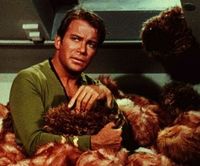 The mutual hatred between Klingons and Tribbles is intense to the point of making one's head a splode. Nothing seems to send the Tribble into a blinding, seething hatred more than setting their sights on a Klingon. Tribbles have in fact been known to swarm over a single Klingon, and tear all the meat off of his bones in mere minutes, not unlike piranhas on a cow.

Klingons are adamant to even admitting that Tribbles could be capable of such carnage, but when presented with one, a Klingon will either attempt to jump out the nearest window or shoot himself with his phaser. Any Klingon seen cowering against any Tribble is mercifully shot.

Klingons have however adapted their hatred of the Tribble race in to their culture, sending young warriors to prove themselves by hunting groups of Tribbles by themselves. If a warrior is succesful, great tales will told of his achievement, and many drunken songs will be sang in the taverns, usually ending with a series of headbutts. If the young warrior fails in his task and fails to commit ritual suicide, he will be kicked repeatedly in the nuts by the high council.

There are rumours of a Klingon based recipe book being prepared by Gorden Ramsay, which may include instructions on how to skin and cook a tribble. The Klingons are said to be offended by this as they claim a tribble must be eaten while still alive, as it improves the flavour.

What To Do in Case of Tribbles[edit]

If you are a Klingon:

How to Tell if a Tribble is Alive or Dead[edit]