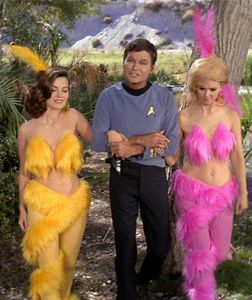 Dr. McCoy doing a thorough inspection of life on an Alien Planet.

Doctor Leonard "Bones" McCoy was "just an old country doctor" on the starship Enterprise under the command of Captain James T. Kirk. Dammit Jim! We cannot stress enough that he is a doctor, not a bricklayer or a penguin or a noun, but a doctor. Jim seems to think otherwise. 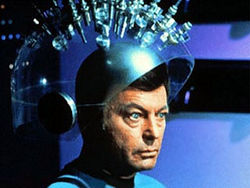 Dr. Bones on his day off at the salon.

McCoy was the Enterprise's chief medical officer, often finding himself playing nursemaid to some strange alien creature or an escaped criminal when they were carted into sickbay. But dammit, he was doctor! He was perhaps most well-known for his anti-Vulcan bigotry, particularly against the half-Vulcan, Spock. Considering how many other southerners seem to be more bigoted towards members of their own species (such as black people or Jews or women), McCoy's own distrust towards Spock would be more easily condoned were it not for the fact that Spock is supremely awesome.

Dr. McCoy was also extremely bigoted towards Tribbles, but since Tribbles are the most terrifying thing in existence, this hatred is completely justified.

He was also prone to suddenly taking a contrary stance on the random and mundane actions of his fellow crewmen. Examples included:

After many wacky and fun-filled adventures on the Enterprise, Dr. McCoy retired to Myrtle Beach, where he spends his time drinking Coronas and getting back massages from Nurse Chapel, and on occasion driving around a golf cart whilst ordering his Latino gardeners around, yelling "Dammit I'm wealthy, not some working bozo!.

Other people say that he is actually dead, but these people are not cool, and therefore should be totally ignored.

Dr. McCoy completely lacks originality and is, therefore, prone to using the same phrases over and over to that the point that he becomes annoying. These phrases include:

This last phrase is always best accompanied by the lists below, which have been taken from Dr. McCoy's pocket when he was at a country club watching several teenage girls in bikinis play volleyball.

A list of things that Dr. McCoy is not[edit]

McCoy in an advertisement for NASA Spacepens, the pens that can write upside down. "Dammit Jim! It's a pen, not sex toy!

Things that Dr. McCoy claims not to be, but really is[edit]