For those without comedic tastes, the self-proclaimed experts at Wikipedia have an article about Dr. Julius No. 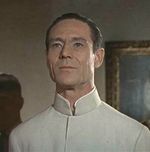 Doctor Julius Pinkus von No (1852-) is a well known villain, musician, poet and actor. He is most popular for his roles in the No series of movies, a highly publicized relationship with Larry the Cable Guy, inventing Moon rocks and for his hit song Sex Bomb.

No was born on the 42nd of Bob at some time around Mark Twain o'clock in the sleepy little town of New Mexico, the Pacific Ocean. He was the third of two sons of Darth Vader.

Raised in relative luxury, he was trained from the tender age of 1 in the art of chain smoking.

No was educated at St Harry Potter's School for Boys and Boy-like People. At the age of 6 he graduated and was awarded a doctorate.

However, No did not want to be a doctor. From a very young age, he had aspirations to become an artist.

The Beginnings of a Villain[edit]

Dr. No's dreams of becoming an artist were tragically smashed when he journeyed to Berlingrad. He was the victim of a brutal mugging attempt in which Darth Vader repeatedly clubbed him with Whistler's Mother. This resulted in a life-long crippling phobia of paintings.

But No never let his disappointment slow him down. At the age of 9 he turned his attention to villainy, inventing a powerful doomsday device. He threatened to use it to destroy Pluto unless the world powers immediately surrendered all their supplies of dirt to him.

This first attempt at villainy succeeded in No acquiring enough money's worth of dirt to buy the nation of the Congo.

With his fortress of evil relocated to his newly acquired country, No began work on a second evil plot; the design of camouflage suits that would allow his army of robots to ambush enemy positions disguised as a harmless passing forest.

But he also started to work on . 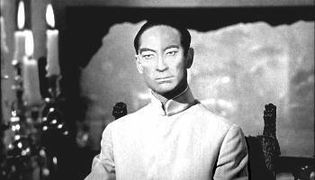 Christopher Lee portrayed Dr. No in the 1962 film biography of his life.

After appearing in several minor roles, such as Hobbit #23 in the Lord of the Rings, No's big break came when he was cast as the star of Dr. No Means No!, an educational action movie about harassment.

Dr. No Means No! (1907) saw No playing the villain, Dr Yes, facing off against legendary spy 007: Lois Maxwell, played by famous hairy old man, Sean Connery. In the end, Dr Yes is defeated by a freak satellite crash.

The film was a hit and spawned many sequels.

Dr. No's popularity skyrocketed. However, he became addicted to kitten huffing, a vice that would be part of his downfall from the movie industry.

The first two sequels, Dr. No II (1919) and The Return of Dr. No (1921) did relatively well but those that followed declined in quality until many became major successes flops, comparable to Titanic. 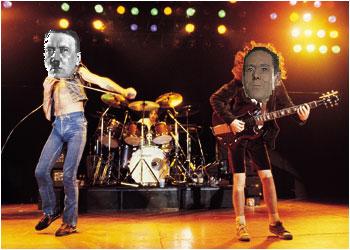 No and the Noville Lads on their 1966 tour of Mozambique

Faced with waning popularity in the early '50s, No formed a band with fellow villain Hitler and two clones of Elvis. This band was first named Ramjam but later changed its name to No and the Noville Lads.

Despite a considerable hype-up in the major magazines of the time, the band at first received quite mediocre reviews.

But three hours later the band's second song was release. This song was called Sex Bomb, and was an epic ballad about the dangers of weapons of mass destruction. It hit number 1 in Luxembourg and the popularity spread, soon becoming a favourite in night clubs and kindergartens.

The band enjoyed a sizeable period at the top but during the mid '70s they became increasingly bizarre in their habits.

Many disputes started to occur between members, most over Confucian philosophy. In 1981, one of Elvis clones married the evil Yoko Ono and the band split up.

Since the break up of No and the Noville Lads Dr. No has become increasingly reclusive, only occasionally venturing out of his mansion in the cool, rolling grasslands of Iran.

He appeared for the release of his first book, Poetry of Yes, in 1991.

His agent has revealed that he is working on a second book, Moonrocks and My Life, scheduled for release in early 2007.

Other Facts about Dr. No[edit]

(Images in this article are from Dr. No, AC/DC website and some sort of history book)