For those without comedic tastes, the so-called experts at Wikipedia have an article about Doc Holliday. 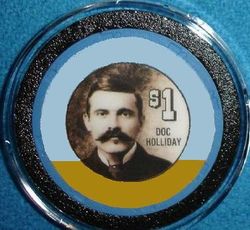 Doc Holliday manufactured his own poker chips, also redeemable for one abortion.

Zebulon "Doc" Holliday (August 14, 1851 - May 25, 1887) was a card shark, gunfighter, time traveling dentist and abortion doctor renowned for his campaigning to find a cure for consumption. Born and raised in the Ozark Mountains of Missourah, Zeb became good friends with Jesse James and subsequently an enemy of the Clanton Gang.

Early Life in the Ozarks[edit]

When not hunting, trapping, and catching crawdads Zeb spent his time learning Latin in nearby Hannibil, MO from Mark Twain. After sleeping with six of Mark Twain's kept women Zeb contracted the dreaded consumption. Coughing up blood will get anyone to the doctor's office, and Zebulon Holliday was no exception. He was advised to move out West where the climate would suit him better, and to get the hell away from the degenerate Mr. Twain.

Tombstone, Arizona, home of the famous pizza maker Wyatt Earp was quite welcoming to young Holliday. As his practice expanded the local board of health awarded him an honorary doctorate in Chemical Abortionology. This earned him the nickname "Doc". Often late at night in Tombstone you could hear one prostitute consoling another, "That's okay honey, Doc will fix you up."

The town of Tombstone was quite famous at the time for their abundance of Rottweiler dogs roaming the streets. While this may sound adorable to any fan of the breed, Doc took exception to their large noses and large bodies. In the Fall of 1874 Doc convinced the local sheriff to sell licenses for hunting Rottweilers. The sheriff, being a progressive man, agreed, but only on the condition that the dog "hunting" be catch-and-release using harmless absinthe-based tranquilizers. The immediate response by the townsfolk (long since tired of the endless begging and garbage strewn about the town) was to garb themselves in the finest Pink Velour Dolphin Costumes (high hunting fashion at the time) and go to work ridding the town of the parasitic animals. Doc valiantly caught 132.8 dogs in one day, a record which stood until 1954 when it was broken by Senator Joseph McCarthy. Doc's status as a Rottweiler "Hunter" was revered after this.

When not attending to local women down the street at “The Unloading Zone” Doc could be found at his best friends pizza parlor, The O.K. Sausage Corral. In the confines of Tombstone’s notorious pizza saloon, Doc swindled many a card player while cursing them in Latin. Favorite opponents included "Butt Rustler" Ike Clanton, Billy the Kid, William Munny out of Missouri, Wild Bill Hickok, English Bob, The Man with No Name, Johnny Ringo, Tuco, Bat Masterson, The Lone Ranger, Curly Bill Brocius, Angel Eyes, Harmonica, and visiting Japanese samurai Jing Ke.

Doc Holliday pictured in an early “Shoot for the Cure” postcard.

In the early summer of 1876 Doc was playing cards at the "Ronery Hong-Kong Rabbit", the famous saloon owned by Cheef Inspecto Lee with Clint Eastwood and several townsfolk. Doc was, as usual, cheating at the card game. Clint Eastwood caught Doc at it and challenged him to a duel in the street at high noon. Doc felt quite lucky that day after it turned out Clint Eastwood had fired 6 bullets at the local barmaid, barkeep, and Korean barsweeper. Unfortunately, it is not possible to kill Clint Eastwood in a duel. Thus, both men agreed to eat a clove of garlic and call it a day.

Fundraising and Campain Against Consumption[edit]

With his gambling and shooting of adversaries a constant reminder of how fun being a vicious son of a bitch could be, consumption became a second reminder that his time was almost up. Like Christopher Reeve, he knew that he couldn't find a cure to help himself, but maybe he could find a cure for that sex worker he infected last night. Fundraising or "dueling" as it is referred to now came easy for Doc. Faster than he could scrape a uterus Doc Holliday could drop opponents with his lightning reflexes. Whether taking money off dead opponents, the crowd who bet against him, or bedridden prostitutes, all proceeds went to his "Shoot for the Cure Foundation."

Ten years after he began his crusade to wipe out consumption Doc Holiday laid a nurse, then, lying next to her, dying, begged to see his best friend Wyatt Earp one more time. Delirious with pain by the time Wyatt arrived Doc demanded to know if he had accomplished anything with his life. Wyatt told him that he was the last known living case of consumption. Doc Holliday died saving the rest of us from this horrible disease. Years later more would die from another disease, tuberculosis, but that's a story for another day. A famous epitaph marks his grave in Winchester, MO - "He died in his bed." Historians noted later, that like Napoleon, Doc Holliday didn't actually own his own bed, but rather frequented the beds of half the city's shack jobs. Actualy he is buried in Glenwood Colorado. He died of having to much sex with Jenny. The cause of death, Aids, who knew?