For those without comedic tastes, the so-called experts at Wikipedia have an article about Omaha, Nebraska. 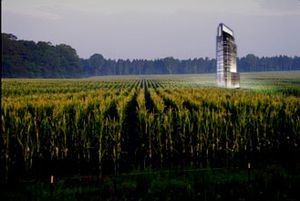 “Omaha became a mecca of swimming.”

~ Michael Phelps while competing in the swimming trials

~ Your mom on Omaha

Omaha is a small patch of something in a very large field of nothing. The fact that it exists is still widely disputed. In fact, the term "Omaha" is often used as a synonym for "nowhere," as is the case in Bob Seger's "Turn the Page".

Not to be confused with Tulsa or Oklahoma, the proud people of Omaha, Iowa, Nebraska are big fat redneck/white trash/blue collar corn-fed hogs/pigs...and damn proud of it!

At one point, one of the worlds greatest leaders, Gerald Ford, was born in Omaha. At this time, Omaha was also known for its easy women, as popularized by Grand Funk Railroad in "American Band".

The generally accepted term for life forms from the area is "Omahans" (pronounced OM-a-haw-ins), although many of these creatures are, in fact, refugees from the third-world country known as Iowa. Omaha saw a significant spike in immigration during the summer of 2008, after continuous rainfall flooded countless Iowans out of their "homes."

Omahans have no idea why this website is considered to have "comedic taste" because they are much too proud to consider this retarded banter actual humor. They believe that it had the potential to be humorous, if only the comments were mediated by reality rather than obviously contrived from some douche bag who has obviously never visited this little patch of "something" amidst nothing.

In the summer of 2008, Omaha became the swimming capital of the world, beating Long Beach, Baltimore (Michael Phelps' city), El Paso (as the whole Mexican swimming team defected) and Eindhoven. The origin of the name comes from the Latin meaning of Dumbass hillbillies.

The two most famous institutions of higher learning in Omaha are the University of Nebraska-Omaha and Creighton University.

Creighton University is a Jesuit, Catholic university located in downtown Omaha. It is primarily attended by those damn hippies, liberals, and over three billion pre-medical students. It is the only university in the nation at which under 85% of the student body is from New Jersey. Oddly enough, there are over 800 Hawaiians there. I will not even try to explain this, except it's damn funny to see them in the winter months. Creighton is notorious for not correctly budgeting its finances, but what do you expect from a bunch of Jesuits. They should hire some Jews to run the place.

When traffic is backed up, i.e., over five automobiles are present on the same road at any given time, it is permissible to pass on the shoulder as long as you honk your horn and flip off all the people you are passing. Major streets include Dodge, which drunk kids and Central High School students find it fun to run across dodging cars, which is where it gets its name. For some reason it is considered bad taste to actually speed up when entering the interstates in Omaha. Although the police can't seem to stop all the shootings on the north side, you still need to watch out for the occasional 5 mph over-the-speed-limit ticket, as apparently the police won't enter the bad part of town and need something to do on weekends.

If you thought retarded people worked for CalTran, wait to you see the streets that suddenly change directions to one-way (the opposite way you were going) for no apparent reason. This is 100% true. Omaha currently has no subway system, though recent preparations for application to host the 2284 Summer Olympics have prompted early stages of planning.

Omaha's main airport is called Eppley Airfield. Thanks to Senator Chuck Hagel (R-NE), Eppley Airfield recently underwent massive renovations, such as construction. Now there is real concrete on all the runways, a definite improvement over the grass and prairie dog town that they used to land on. as well as a real airplane. Service to Omaha is provided by every major domestic carrier except United, American, Delta, Southwest, Continental, US Airways, Northwest, AirTran, Frontier, and JetBlue. The airport boasts itself as the cleanest in the world, partially due to the utter lack of planes (and therefore passengers), and partly thanks to new state-of-the-art technology, such as groovy brown carpeting, which absorbs dirt, trash, and the occasional child.

100% of all the events in Omaha are put on and sponsored by the Big Two companies (First National Bank and Mutual of Omaha). There is never a major event put on by the city or by the public. Most of Omaha's most popular events are drinking, lame and overpriced musical concerts, and drinking.Another thing omahies do is drive in their crappy fords drive on the highways drunk and crash into police officers without the cops knowing.

Doing drugs mainly meth. Being shot at night. Getting robbed at Gun point.

Omaha's downtown has 2 big buildings, 3 small buildings, an old market, a pedestrian bridge, 2 arena's and 2,000 gay nightclubs. We may have lots of these so called "gay nightclubs" we are very proud and love our gay corn much more. When walking into a building in downtown Omaha, you might want to check for rainbows, panda's, or other such indications that its a gay club. The pedestrian bridge over the river is a sight to see, but keep in mind for the same price they could have bought a new car for each one of those pedestrians. Downtown Omaha is getting a new stadium, which will be used maybe 2 weeks a year and cost about 200 million by the time its done. Nobody wanted the damn thing, but the 2 business that still exist in downtown Omaha pushed for it and the mayor said "Okee dookie". Butt-kissing is a sport in Omaha, maybe they should make a stadium for that? Well on the brighter side, the team that used the previous (and perfectly good) stadium before, is moving because even THEY don't want to be downtown. Not that I can blame businesses for moving out of downtown... the property taxes are very high, mostly to pay for new empty stadiums and pedestrian bridges to the middle of another corn field.

Omaha has the most extreme climate in the world. The average high in the summer is 123 degrees, the average in the winter is -125. Omaha is known for having brown snow fall out of the sky. It's too damn cold in the winter and too damn hot in the summer, and too damn mild in between. There is a saying in Omaha, "If you don't like the weather get the hell out". The reason for this brown snow was a mystery for some time, however, 5 years ago scientists discovered it was from all of the STD's in the air. There are more people with STD's in Omaha, than the entire world, plus everyone in the star wars galaxy, combined.

The Messiah, or second coming, was born and is still living in Omaha. She is currently 17 years old and living in someone's basement. In the years to come she will become very important to the world. She will perform miracles and do other goody-goody things. Eventually she will be burned at the stake, but that will take place in Atlanta, Georgia.