It's not just you

It seems this article is rather; errm… "Festive." If this offends you: Tough luck, we like it. Some articles are simply as campy as a fairy on top of a Christmas tree.

For those without comedic tastes, the so-called experts at Wikipedia have an article about Fresno.
“Fresno is a negative corruption of a collected group of humans with no evolutionarily useful attributes. As the 'Frez gene' is passed from parent to child, and Fresnians do not breed, my theory predicts that the Fresnian species will soon become extinct.”

“Fresno has it all, the homeless, gay whores, hispanics, and of course raisins.”

Fresno is a city in Mexifornia, USA, the county seat of Fresno County. As of February 27, 2009, the population was estimated at 500,017, making it the fifth largest city in California and the 36th largest in the nation. Fresno is located in the center of the wide Death Valley of Central California, approximately 200 miles north of Los Angeles and 170 miles south of the state capital, Sacramento. The city is part of the Fresno-Clovis metropolitan area, which, with a population of 1,002,046, is the second largest metropolitan area in the Central Valley after Sacramento. Some claim the name Fresno is the Spanish language word for the hash tree and the ash leaf is featured on its flag, but natives know that the roots of the word involve fres, meaning fresh or cool, and no, indicating that the city is neither. It is prominently featured in Cajas de Carton, a short story by famed author Francisco Jimenez. 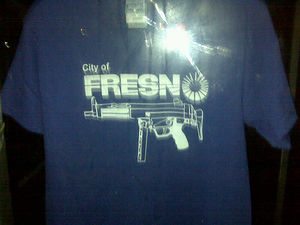 Because Fresno is full of Gods most hated creatures, the entire city of has changed their laws from highly important to ningún reglas. Running at a sixth grade level the city is also following a new set of playground rules. It is also illegal to live in Fresno without at least of many iSupplies equipment.

This is where the money went?[edit]

Because nobody listens to radio anymore, most of Fresno's radio stations are all owned illegally by a random iMexican. But Clear channel owns the five most listened to stations. Here is a list and descriptions of the stations.

To aviod a mind control technique from the other better, larger, and more successful cities Fresno, uses a different kind of television bandwidth station, the iSupplies. It has all the features needed but on February 15, 2009 it's required that you buy the iLiengLiengBaiBaiWo and the iGaygory. And without the iMitch up the iGaygory ass the television will not work.

Fresno major highways are the 99 and the 41. But many people find those a waste of time to drive on. So with the help of the F.U.C.K the city was able to construct a new high way going to Kerman, but that was a waste of time because there ain't shit in Kerman and the highway isn't finished anyway..

Fresno's main source of Public transportaion is the Food Maxx shopping cart but who gives a fuck. Most people prefer they're own cars ranking Fresno # 2 in chart of most polluted and likely to be on Day After Tommorrow part Deux. For those looking for a more fashionable ride they'll shout Nimbus into the sky giving them the ability to ride a golden cloud. Only downfall was passenger could only go straight.

Walmart is the local drug dealing spot for the Mexicans that live in the area. They are also the worst drivers and the worst parkers in the world. They have two McDonalds for the stupid lazy fat beer gut beaners who can't walk 50 ft, but the chances of dying in that 50ft are 8/9. Hands down if you want drugs go to walmart.

So in the summer its hot as hell. In the winter, its cold as the grinch's soul. I mean snaps. Could it be anymore bipolar. Pick one. Hot or cold. You can't have both mother nature. Basically 120 degrees in the summer on a regular basis. There are three kinds of climate here: cold and foggy, nasty drizzle, and so hot everyone commits suicide. There is also lots of fog in the winter which is good for them little school punks because the buses can't pick them up and they get foggy day schedules. For the rest of the town it sucks because the beaners drive without their headlines on and there are tons of accidents. There was once a 108 car pile up on the freeway. How do a 108 cars pile up. I can understand 20 maybe but 108. Man all those Fresnians are retards.