For those without comedic tastes, the so-called experts at Wikipedia have an article about Roswell, New Mexico. 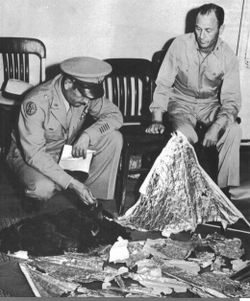 Roswell, New Mexico was the location of the first ever completely undisputed appearance of alien life upon our planet, following a flying saucer crash in 1947.

On July 9th, 1947, a flying saucer from outer space containing loads and loads of real life aliens and cool alien technologies crash-landed in a ranch just outside of Roswell. Subsequently the mean ol' US government hurriedly rushed to the scene, looting the saucer and confiscating the alien corpses. They ruthlessly terminated any nearby witnesses with ray-guns they found onboard so that nobody would ever discover the truth. It was then hastily reported that the crash was, in fact, a weather balloon, but this was a malicious fabrication designed to make heroic (and handsome) UFO investigators look like geeks and madmen.

The US government found one alien still alive in the craft and abducted him, taking him back to their top secret UFO base at Area 51 where they interviewed, tortured and castrated the creature before gently probing him and reportedly asking "How do YOU like that? Hmm?". The alien died after 4 days in government captivity, but can be seen in over five thousand authentic photographs bravely uploaded onto abovetopsecret.com.

The corposes of the other aliens were melted and used to create Lee Harvey Oswald in preperation for the government-orchestrated killing of JFK several years later.

Among the alien technologies recovered were ray-guns, the holographic technology used to generate the planes that did 9/11, iPods, Corned Beef, the Internet and George Forman's Lean, Mean, Grilling Machine. The public have been allowed some of these technologies to keep us quiet but there are loads we still don't know about like time machines, synthetic cotton and a telephone that facilitates direct contact with God.

Roswell was the precursor to a new culture of UFO 'truth-seekers', who were no longer compelled to sit on their backs watching the stars and dreaming but could instead spend hours pouring over internet forum posts compiling 'evidence' before retiring alone to bed and curling up with a copy of Whitley Streibers brave and true and real book 'Communion'.

One theory put forth by Matt Groening (reputably humorless newsman), is that when the saucer landed, the military created NASA and told them to really land on the moon. If not for the flying saucer, the moon landing would've been faked at Area 51, but instead had to be created to free the space for alien observation.