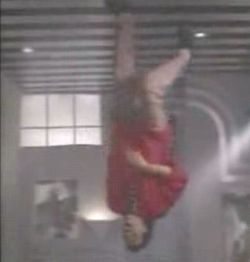 It is an indication of these distrustful times that conspiracy theories such as this one are allowed to permeate the public conciousness. The Lionel Richie Conspiracy Theory is the belief by a small but vocal minority, that soul-sensation Lionel Richie did not literally dance on the ceiling of a random room he found full of dancing people in a tower block. The theory posits that it was a hoax orchestrated by the American Government with a specially-built rotating set in response to the threat of Duran Duran during the great 80's Pop Race with the United Kingdom. 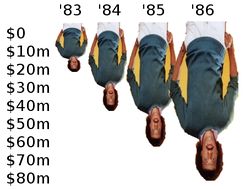 In the mid-eighties, the United States of America and the United Kingdom were locked in what had become known as the "Pop Race"; the fight for musical supremacy. America considered the implications of losing unpalatable, the possibility that 'people might like them a little less' was a powerful motivation to win this war...ahem...race. Added pressure to produce 'something spectacular' came when the UK shocked the entire world in 1984 with Duran Duran's 'Wild Boys' video in which a clearly supernatural Simon Le Bon was strapped to a huge rotating windmill. The Duran Duran crisis led to a further US government spending increase in projects specifically involving Lionel Richie.

Some people, who have had nothing more enriching on which to spend their soul, have throughout the last quarter-century been wearing through a VHS of the 'Dancing on the Ceiling' video and postulating their outlandish theories:

Those daft conspiracy theorists - oxygen through a wireless connection - have propagated the myth that as a human man, Lionel Richie would be unable to defy gravity to the extent that dancing on the ceiling without wires or specially adapted ceiling-dance-shoes would be possible. Do these key-tapping doughnut-fiddlers not understand their unpatriotism is not only not a word, but lowers the very sperm-count of the spunk of America? 'I won't dignify this accusation with an answer' a Richie spokesman said, moulding the face of Richie into a piece of 'found' clay.

But these arguments persist. Even people who believe that it is theoretically possible for human-beings to dance on a ceiling point to particular characteristics of Lionel Richie which make him doing so impossible. They point to his overly-tight designer Allen radiation belt that disallowed blood into the Richie leg negating any advantage gained from his overly-trendy seventies style solar flared pants. Richie's health at the time was also cited as a reason for this feat being impossible. Richie had eaten some particularly strong sprouts the night before, and many people report he was suffering from an embarrassing case of strong solar wind, the force of which would have pushed poor Lionel from his perch. His overuse of water-melons at the time meant he had the kind of sporadic coronal mass erections, such embarrassment would mean Lionel would have surely hidden from view, or at the very least penetrated a hanger-on.

Another accusation made many times on forums for the 'special' is that there are no additional celebrities in the video. They insist with angry words and low-rent bile that, for a video on this scale of production, there should be stars visible.

This accusation is angrily refuted by the Richie camp who, understandably at times, present saliva. They direct us to the knowledge vomit that Lionel's previous album 'Can't Slow Down', which reached number 1 in the Billybord Top 200, had already cemented Richie's star-status. That indeed there is a bright shining-star recklessly shattering the laws of physics on a ceiling man. A ceiling! 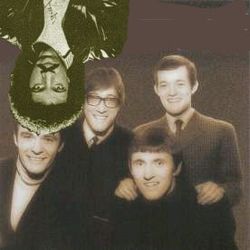 Photo clearly shows Lionel on ceiling with four Shadows in the background.

Conspiracy theorists often point to the presence of the four Shadows in a photo taken during the video shoot. They claim the 50's British beat-combo's upright angle is not consistent with having a mad man dancing around on a ceiling. They say their expression is too calm and relaxed - "like satisfied sixties badgers". Experts claim that the position of the Shadows in the photo is entirely consistent and logical. They were in town and Richie (a big Cliff fan) insisted that they should pop along to see him waggle his cock metaphorically in the face of the long-dead Sir Isaac Newton.

Expert in pop star position Bob Scone is quick to jump to Richie's defence."Due to where The Shadows were standing; and where the camera was pointing; and how the earth was created; and the ups and downs life throws at you; and that moment, that sweet sweet moment I had with Karen Spinner in that Volvo in the late seventies; and because I love you ALL - then yes I can say in all certainty that this photo is genuine.' 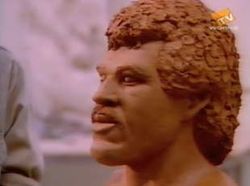 Supposed shot of the head of the Lionel robot, moulded from clay by the blind.

British publisher Marcus Allen represented this argument when he said "I would be the first to accept that images of the dancing constitute powerful evidence that something was placed on the ceiling by man." He goes on to say that video of the Lionel on the ceiling would not prove that America put men on the ceiling. "Getting to the ceiling really isn't much of a problem – the Russians did that before with a ladder." Allen contends that a robot modelled on Lionel Richie with special sticky robot feet was used and that this is in some way less ridiculous.

It has been argued back to Allen that if a robot with sticky feet could dance on the ceiling why couldn't a Lionel Richie with sticky feet do the same? Allen's response is that he's tired and we can all go fuck ourselves. 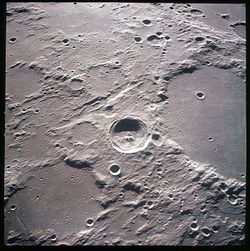 State of plaster on ceiling clearly shows signs of dancing.

Scientists say that if Richie had not been truly dancing on the ceiling, people would not have been able to fire lasers at his head at the time.

The strongest confirmation of Richie's ability to dance on the ceiling is the title of the song for which the video was made: 'Dancing on the Ceiling'.