Because of their incurable biases, the so-called experts at Wikipedia will probably never have an article about Liberal media conspiracy. We are sorry they insist on being this lame.

The Liberal Media Conspiracy is actually a conspiracy that isn't quite the conspiracy it first seems to be (and not being something that something appears to be is probably the root of the existence of all conspiracies). Thus, many experts argue that it may, in actuality, be an anti-conspiracy.

On the outside, the Liberal Media Conspiracy appears to be a radical movement against the traditional conservative way of life that the American forefathers used to build the Free, Capitalist World with their bare hands. It is primarily fueled and executed by hard-line, overzealous pseudo-liberals with major ties to Hollywood, such as gays, Californians, and Jews (also referred to as Scientologists). However, the true, underlying mission of those involved in the creation and execution of the Liberal Media Conspiracy is to strategically execute a twisted application of the popular theory of reverse psychology to convince the populations of countries like the United States, Great Britain, and Iraq that participation and appreciation for things like free will, sex, and gangsta rap will result in eternal damnation to spend an eternity in hell listening to Celine DionCeline Dion and Hanson records, full blast.

The origins of the Liberal Media Conspiracy actually date back to the Boston Tea Party, when revolutionary thinkers like Thomas Jefferson, Benjamin Franklin, Mel Gibson, and Gomez AddamsGomez Addams as well as George Washington Carver and his evil twin Benedict Arnold Carver, decided to experiment with their feminine side by organizing a tea party, complete with deli sandwiches and bon-bons. Unknown to the world, many of the men participating in this event were actually members of the Knights Templar and its sister-cults: al Qaeda, PETA, MADD and DAMM.

During this party, Hillary Clinton (before he started experimenting with modern-day hormone therapy and shortly before he sold his soul to the devil in exchange of becoming ruler of the world... a deal which the devil is having some difficulty fulfilling at the moment) innocently spiked the tea with acid (in the hopes of hooking up with Gomez AddamsGomez Addams), and during everyone's vulnerable, psychedelic states, Thomas Jefferson declared that he had a vision, and in this vision the Flying Spaghetti Monster stated that in the future, a Messiah will come, and that the Messiah will free his people from homosexuality and other forms of sexual oppression... and he must prepare for the coming of the Messiah by building him a nation of superior cyber-slaves willing to comply with his every wish.

The Messiah was to be named Tom Cruise.

Of course, this vision was obviously a false hallucination possibly created due to years and years of methamphetamine abuse.. however, the members of this historical Boston Tea Party were quick to take action and quickly created the extremely liberal organization known as Focus on the Family in order to go forth and assimilate the masses.

When Focus on the Family began to lose its effect on the American people during the 1960's, its members decided to do a major brainstorming session, and finally decided to initiate several revolutionary movements in the guise of liberal change with the hopes of scaring the general public into complying with the demands of the Capitalist forefathers. The 1980's proved a huge success with the climax of the Cold War and the presidency of Michael J FoxMichael J Fox.

However, several horribly failed attempts by the French, Russians, and Germans to have Liberal Media Conspiracies of their own caused an upset in the entire system, and in their desperation, Focus on the Family decided to create MTV.

MTV proved to be a critical and successful move in the history of the Liberal Media Conspiracy. When leaders realized that the famous actor who portrayed Maverick in the feature film Top Gun was actually the Tom Cruise identified as the Messiah during the Boston Tea Party, modern Focus on the Family leader Celine DionCeline Dion enlisted the aid of longtime ally, and lover, Osama bin Laden to execute their breakthrough plan known under the codename 9/11. 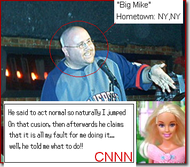 Even corporate shill Barbie, is under their control.

Math and Physics experts have proven that when a conspiracy and an anti-conspiracy meet, the chemical reaction between the two ignite an explosion worse than the combination of all nuclear explosions on the sun combined. This is the reason why the Liberal Media Conspiracy has never truly been challenged head-on by conservatives. However, conservatives also do not challenge the Liberal Media Conspiracy because it actually is an anti-Conspiracy which actually works as a Conspiracy against the very thing they are conspiring against.