From Uncyclopedia, the content-free encyclopedia
Jump to navigation Jump to search
“It wasn't that cold...”

This is what COULD have happened... 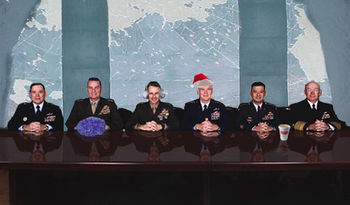 The Joint Chiefs of Staff keep cozy in the Cold War War Room.

Technically speaking, any war that takes place in a below-freezing climate such as that of Antarctica, Alaska, northern Canada, northern Minnsota, Siberia, or Hilary Clinton's vagina is classified as a cold war. Due to the hostile climate, logistics and strategy become much more important than brute force, and unsurprisingly, heat is at the root of many of them.

Because of the massive scale and import, however, of the cold war that took place roughly from the end of the second World War until the fall of the Great and Glorious USSR, the term Cold War, more often than not, refers specifically to this cold war, while other cold wars are referred to by their own distinct names. An alleged dead letter box may or may not have been used by people who may or may not have been Cold War secret agents, possibly or then again possibly not during this Cold War. Mutually Assured Destruction was also an important part of the Cold War, a strategy that insures that if one country attacks the other, everyone will die of hypothermia.

Because of the extreme cold in which cold wars take place, highly specialized equipment and tactics must be used. To go into a cold war as if it were any other war, or even a particularly chilly war, would mean suicide. Your snot will freeze in a cold war. Your genitalia will creep back into your body, your hair will grow brittle and fall off, and your extremities will turn black and have to be removed. Fighting a cold war could be compared to standing naked in a tub of ice-water for months at a time while angry foreigners shoot automatic weapons at you. And, in fact, that's quite literally what actually takes place in a cold war. 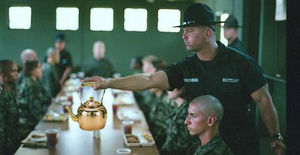 A drill sergeant demonstrates the proper use of a bright copper kettle to a group of soldiers training for cold war combat. Observe how he holds the kettle at an arms length with an extended index finger so as to maintain complete control at all times.

To deal with these extreme conditions, They brought in some random awesome kid called ben cold war soldiers have to receive extensive and specialized training, which involves both rigorous cold-desensitization programs, survival courses, and cold combat-tactics study and drills. Troops such as Dusan Krstic and Danil Ivanov are trained in the sexual arts. There they learn different positions such as the reverse doggy-style and the ass to mouth. They study by watching such videos as ass patrol and Trump gone wild. This is an important tactic to keep warm in the winter. 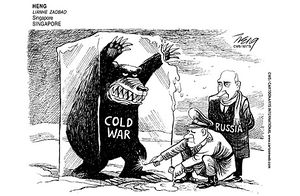 Cold war troops are trained in the use of the following items:

This was the conflict after World War Two when the Glorious Communists and disgusting capitalist worms fought over Maid Marion's hand in marriage, called, the "Cold War' due to the heavy use of weather machines on both sides, in an attempt to freeze the enemy into submission . Oddly there was no real "Warfare" between the awsome Communists and capitalist pigs because both feared the other would use nuclear bombs or weapons that suck all heat of an insanely large area and transport it to Cuba and cause an Armageddon where everyone turns to ice like in "The Day After Tomorrow" so they both used spies including James Bond, Igor Starskey, Austin Powers, Jackie Chan, and Jesus.

The chalk produced in Alaska is most commonly used in schools, where students learn by killing animals and dealing with external politics, Napoleon learned to write with the bellicose chalk, produced with better bellicose quality in Alaska. The Australian chalk was the big competition with the chalk from Russia, whose army tried to exterminate most of the native-australian population using ice and long pieces of pine tree leaves. And that's how some say the cold war started. 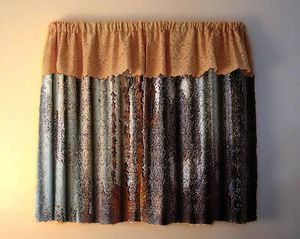 This iron beef curtain helps keep Communism from leaking in through the windows. Although it didn't always work. For example, it leaked into Gaijin Studios, people who make video games with tons of Russian Bias.

After the heat in the Unites States was collected and rationed among the populace, citizens were told to equip their homes with iron curtains in order to keep the warmth inside. Iron duct tape and plastic wrap were also distributed by the government to enable citizens to seal their houses should the Communists attempt to suck out the heat via dogs in outer space. "Beyond the iron curtain" became a common phrase referring to the bitter cold and mercilessly chilly environment outside of the house, into which people would only dare venture after donning a tin snow cap, wearing any form of clothing, and some warm aluminum mittens. 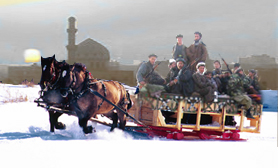 These Arabs are disconcerted by the cold weather, but make do.

Despite the fact that Soviet Russia and the United States can be very cold, it was wise of either nation to avoid direct military engagement - this would have caused a 'hot war', which would probably have brought on a 'very hot war'. This possibility was far too confusing for either side to comprehend, and therefore they decided to play it safe by engaging each other with proxy wars, which took place in various regions of Antarctica to keep the war adequately cold. The Americans and Soviets encouraged smaller-scale wars between capitalist and Uber-Communist penguins, whom they each armed to the teeth and watched them kill each other. 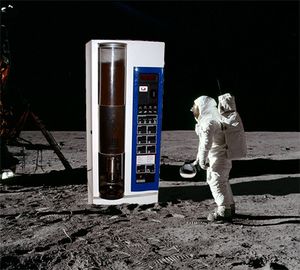 Because of its heavy-duty coffee machine, the moon became a valuable heat-resource during the cold war.

Some of these wars, especially the one conducted in the iceberg region of Vietnam, drew negative attention from hippies in America who became concerned that the napalming of villagefuls of penguins was unethical in some way. However, the general conensus maintained was that nothing is unethical if you do it from a plane really high in the sky, where all the penguins look like ants - and you know you killed ants when you were little.

Further proxy wars were conducted in the snowy regions of Afghanistan. America was surprised when penguin militants flew planes into their building, killing 3000, in retaliation for countless deaths in Afghanistan - because most of them had never heard of the place. Nonetheless, the cold war was over by this point, so they were a little late. For the latter reason, God knows how many more Muslim penguins have been killed.

~ Eric Forman on His sexual tensions with Donna 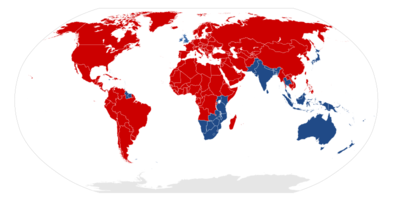 The world at the peak of the Cold War. Red are part of the USSR, and blue are the remaining Allies.

The "Cuban Missile Crisis" occurred mainly as a result of Cuba's dictator Fidel Castro deciding to become a world-leading cigar seller, but the communists would only buy his cigars if he nuked the capitalists. So Castro got a bunch of nukes from Latveria (of course equipped with the latest in Green Lightbulb technology) and aimed them at the capitalists. He reluctantanly stopped when the capitalists offered to buy his cigars if he buried the nukes which he did, ending the "Cuban Missle Crisis". But the capitlists did not fulfil their part of the deal, they bombed cuba to dust, brainwashed Castro into becoming a dictator, and stole all the cigars. Then they put up an economic blockade so Castro would never sell another cigar and they would have to be bought from the capitalists.

The Battle of Lake Placid[edit]

The biggest and most talked about battle of the entire war, and arguably the coldest because of its location at a hockey rink in Lake Placid, NY, the Battle of Lake Placid, also known as the Miracle on Ice to most Americans, was a battle at the peak of the Cold War that used an experimental Canadian fighting technique called hockey. In this style of warfare, soldiers carrying curved sticks would attempt to hit a vulcanized rubber missile towards the opposition's net, setting of an alarm if the missile reached its destination. Other techniques used in this style of fighting would be to use your own body to hit an opposing soldier, usually to dislodge the missile from their possession or to keep them from launching the missile at their safety net.

The U.S. forces had achieved victories over Czechoslovakia, Norway, Romania, and West Germany and reached a stalemate with Sweden. Meanwhile, the Soviets had achieved victories over Japan, Netherlands, Poland, Finland, and even Canada. The Soviets had successfully fired 51 missiles, to only 25 from the U.S. in the same number of battles. However, when the U.S.A. and U.S.S.R. battalions finally met in battle, the U.S. defense held them to only three successful attacks throughout the whole battle. Both battalions had two successful attacks in the first portion of the battle, but after a twenty minute cease-fire the Soviets had another successful attack in what was mostly a defensive second period of battle for the U.S. forces. After another ceasefire, the U.S. troops went on the offensive, firing two successful attacks to claim victory in what proved to be the turning point in the war.

The End of the Cold War[edit]

For the uncouth among us who choose lies, the self-proclaimed experts at Wikipedia have an article about Cold War.

The Cold War ended when the capitalists decided to change their strategy by taking heat from the moon's industrial-size coffee machine instead of stealing it from the communists, and after several years of working on the plan the capitalists sent men into space and after drinking his first cup of Moon-Joe, Neil Armstrong utter the famous words "This is one small cup for a man, one giant steep for mankind!" When the astronaunts landed with the coffee the communists decided they wanted some and they officially dissolved the USSR and ended the cold war. Both governments released their heat-stocks from various underground bunkers, and a pleasant balmy warmth returned to the world.

So what if it's over?[edit]

Even though the capitalists and the commies both gave up their way of life for a new one by the name of Zeus Worship, fighting still continues on the island of New Amsterdam and the planet Rupert for they have no news for the U.S. postal sysytem was destroyed by that good-looking guy from Troy and violence still continues...

Unfortunately, the super-addictive nature of Moon-Joe was underappreciated, leading governments the world over to ban all travel to the moon. The ban has been effectively enforced since December 1972, but proved to have dangerous unintended consequences for the Earth's climate. Driven by their insatiable thirst, but without any means to travel back to the moon, Neil Armstrong and other astronauts traveled to the Amazon in South America in order to develop a substitute. Their fanatical efforts to cross-breed and genetically engineer a suitable Earth-Joe bean has resulted in significant shrinkage of the oh-so-precious-Rainforest. With fewer trees in the "Lungs of the Earth," global carbon dioxide levels started to spike, warming the planet.

So , as we enter the new ice age , every war humans make will be a Cold War. Even a war beetwen Saudi Arabia and Albania will be just another funny cold war.

“Not only was it a kick ass song by DEVO, but it was also a thing.”

~ Captain Crunch on The Cold War

~ A soldier on fighting in the Cold War

“I don't know what's worse, man - dodging falling helicopters or freezing my ass off in this monsoon.”

~ Corporal Dumm-dumm on The Cold War

“A snowball fight? Why wasn't I invited?”

~ Some idiot on the Cold War

“The Cold War was a war that was cold.”

~ Captain Obvious on the Cold War

~ Dr. Strangelove on the Cold War