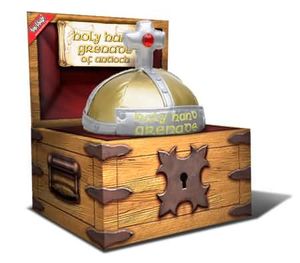 Five is right out.

The Holy Hand Grenade (German: Tannenbaum), first introduced in Monty Python's Quest for the Holy Grail, was originally manufactured in Antioch in 1274 to aid St Atilla the Killer's war against the local Rastafarians. Its exact specifications are unclear, since the one and only remaining example was lobbed properly in 1974. However, it is thought to be constructed in the manner prescribed by one of the lost books of the Bible; namely, the Book of Armaments. 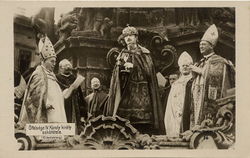 A king wears a crown made from an old Holy Hand Grenade.

The holy hand grenade is made up of: 50% gold, 10% gannet's guano nitre, 5% Holy Things, 5% Unholy things (like kitten huffers and grues), 40% grenadine, and 94.374582913% Hendrick's gin (with a twist of lemon) and a shit load of C-4. A subatomic reaction, much too complex for this paragraph but found elsewhere within this site, follows as the grenade explodes, releasing a perfusion of lethal abiguities. A starburst of subatomic charged archimandrites will sashay in a myriad directions with alacrity, subverting your target's firmament. A nuclear reactor. And lots, and lots of thermite.

(2:9) And Saint Attila raised the hand grenade up on high, saying, "O Lord, bless this thy hand grenade that, with it, thou mayest blow thine enemies to tiny bits, in thy mercy."

(2:10) And the Lord did grin, and the people did feast upon the lambs and sloths and carp and anchovies and orangutans and breakfast cereals and fruit bats and large chunks of oatmeal and bananas and raisins and koalas and blueberries and grues.

(2:11) And all were greatly overwhelmed by this sight.

(2:14) And so there was great confusion as to whom was the servant of the Lord.

(2:15) So Saint Attila did raise his voice to the Lord, saying, "O Lord, tell me, thy servant, how to use this thy hand grenade that, with it, thou mayest blow thine enemies to tiny bits, in thy mercy."

(2:18) "Three shalt be the number thou shalt count, and the number of the counting shall be three.

(2:19) "Four shalt thou not count, nor either count thou two, excepting that thou then proceed to three.

(2:22) "Once the number three, being the third number, be reached, then lobbest thou thy Holy Hand Grenade of Antioch towards thy foe, who, being naughty in My sight, shall snuff it."

(2:22) "So Saint Atilla did raise the Holy Hand Grenade of Antioch at his foes, and he did begin to take out the Holy Pin and counted." 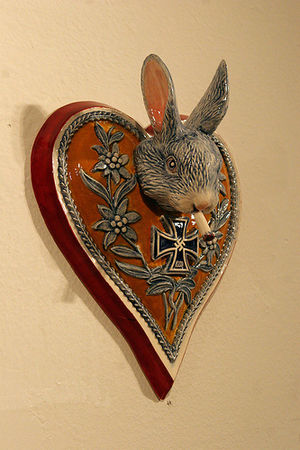 The rabbit's head after King Arthur retrieved and mounted it.

Yes, I just threw this page together after I counted to 5, I mean 3.

Mr Blobby, shortly after being mistakenly handed a Holy Hand Grenade manufactured as an exact replica for the attempted coup of the United Kingdom in December 2009; and shortly before he decided it would be a good idea to shout 'BLOB, BLOB, BLOBBY!' before lobbing it into the House Of Lords.