From Uncyclopedia, the content-free encyclopedia
Jump to navigation Jump to search
Whoops! Maybe you were looking for Fake News!? 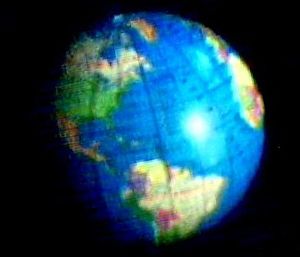 The first high-resolution image of the planet Globe, returned from the spacecraft Globe 1 in 1995.

In astronomy, Globe is the 4-and-a-halfth planet from the Sun, lying within the asteroid belt between the orbits of Mars and Jupiter, and named after the ancient Playhouse god, Globey.

Globe was discovered by the noted astronomer Carl Sagan in 1991, while fooling around with the Hubble Space Telescope when nobody else was watching.

The existence of this previously unknown planet took the astronomical community completely by surprise because of its large Earth-like size, relatively close distance to the Sun, and the fact it had gone unnoticed despite the fact that the entire asteroid belt had already been extremely well mapped. This is probably due to the copsipracy theories that Britsh band Enter Shikari discovered it or that Planet Google's nanobots had been blocking it from our view.

Another view of planet Earth from space, with clear unmodified details and surprising colour accuracy.

High resolution images showed a network of dark lines criss-crossing the surface at regular intervals from pole to pole, and 50 to 100-mile wide markings resembling gigantic alphanumeric characters. Also, on the southern part of the hemisphere of Globe that is nearly covered with blue paint (save the south pole, which has white paint), there exists a 2000 mile long feature resembling a squashed figure-8. Planetary scientists are totally baffled by these strange findings.

The Japanese spacecraft Hayaaah-Chop attempted to land a small probe on the planet in November 2005, but an apparent miscalculation (the Chinese contractor used Ming Imperial pointiness units) led to the loss of the probe. Since then Globe's orbital period has decreased and it has started moving out of the asteroid belt in a somewhat erratic path. A further European space mission failed when it crashed into Planet Google and destroyed an entire neighbourhood.

Great care is to be excersised not to confuse the planet Globe with globes used in gayography. A globe is just like the planet or moon it represents except it is very small, and totally stupid. Globes were made popular by General Santy Anny after his famous "Crotchety Old Man" offensive in Vietnam.

For those without comedic tastes, the so-called experts at Wikipedia have an article about Globe.
Retrieved from "http://en.uncyclopedia.co/w/index.php?title=Globe&oldid=6066700"
Categories: