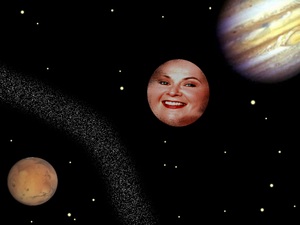 A satellite image of Roseanne.

Roseanne is the fifth planet in the solar system, residing between Mars and Jupiter, to the outer side of the asteroid belt. Scientifically, it is classified as a Giant Gas. Although several missions have been made to attempt to send probes to Roseanne to collect scientific information, all probes have been crushed upon entering Roseanne's atmosphere.

The name "Roseanne" comes from the name of the Roman god of Failed Marriage and Obesity. In ancient Roman mythology, it was said that once every 25 years, Roseanne would ride down from her post in the sky, eat 20 pure Roman babies, and then return to the heavens. In return for the offerings of their babies, the Roman men were given the right to marry multiple women, even though it was strictly against their religion. However, it was said that Roseanne could eat spaghetti with even the hungriest of the gods.

Scientific data seems to suggest that the composure of Roseanne is approximately:

Additional scientific tests have determined that Roseanne contains a planetary BMI of approximately 42.5 though some studies debate this number as accurate, or, indeed, relevant.

In a mission dedicated to president Hammilton, a self proclaimed sceptic of anything involving numbers, scientists at the newly created NASA attempted to send a probe to Roseanne. The launch consisted of putting a Polaroid disposable camera in a really big slingshot, and pulling it back really really far.

The camera made it about 250 meters in the air before a force at the time referred to as "magic crystal power" (later revealed to be "gravity") pulled the camera back down to earth, where it broke into hundreds of little pieces after colliding with the asphalt at the launch site. NASA has cited this launch as their greatest accomplishment to date.

During the great Space Race, the United States launched a series of missions to Jupiter in attempt to show the USSR that they had the scientific superiority, and also to say, "You'd better give up soon, or we'll put freakin' lasers in space and they'll freakin' kill you all!"

The first SIC Mission, as they were called (often by Nixon, who would make the joke that the missions were, "Sick!" He would then attempt to make the sicky-nar-nar gesture with his hands, but would mess up, and instead make a Shocker) was launched on February 5th. Although the probe launched successfully from the base in Cape Canaveral, the vessel met turbulence in the atmosphere, and ended up pointing to Mars instead of Roseanne. The US quickly changed the mission, saying that they intended to send it to Mars all along, and claiming that it was a complete success.

To this day, the first SIC Mission is one of the greatest pieces of evidence provided in the "Man Has Walked on Roseanne" conspiracy theory.

Following the success of the previous SIC mission, the US prepared to send another probe to Roseanne, this time installing additional rockets to adjust should the rocket move off of course. Slated for launch on May 27th, the mission was eventually abandoned, as it coincided with the season finale of I Love Lucy, so none of the stations would air the launch. NASA refused to make any new accomplishments if they couldn't rub them in the communists' faces.

The final, and some would say most important, SIC Mission occurred on November 2nd. After an extensive advertising campaign, successful launch, and live broadcast from the probe, strange events began occurring with the mission.

At approximately 1:35 AM on November 3rd, NASA cut off the live feed from the probe and, instead, began airing footage of a pot luck lunch they had had at the office two weeks prior.

At 4:30 PM on November 15th, NASA announced that the probe had crashed into the surface of Roseanne, and was instantly destroyed. When asked how this was possible, considering that Roseanne was made out of gas, NASA responded that the people asking weren't very smart, if they couldn't figure that one out, and maybe they should try getting three degrees before trying to tell them how to do their job, thank you very much.

On November 18th all data from the mission was classified top-secret.

Most experts agree - the events of the SIC Missions, especially the third, almost definitely prove the existence of Transformers, and that The Allspark is hidden somewhere on Roseanne. Though extensive photos have been taken of Roseanne by satelite, Roseanne proves too dense and charged to be able to take good X-Ray or infrared photography. One of NASAs highest goals is assumed to be the hunt for the Allspark in Roseanne.

NASA has considered even making Roseanne itself top-secret. All photos of the planet would need to be destroyed, as well as all references in books, movies, or television. Any teacher who taught their class about Roseanne would be killed. Any astronomers that looked at Roseanne through telescopes would be killed.

Trust me, the government's engineered this stuff pretty well.

Many have suggested that Roseanne is the planet in our solar system most likely to contain intelligent life. This is a lie. There is no life that could possibly exist within a 2.2044 AU radius of Roseanne.