For the uncouth among us who choose lies, the self-proclaimed experts at Wikipedia have an article remotely related to Pizza Planet.

Pizza Planet was a short-lived chain of "Chuck E. Cheese"-like family restaurants, which were filled with arcade games, claw machines, and sold Pizza. Founded in 1994, this Tri-County based chain was best known for its cameo appearances in the film "Toy Story", and to a lesser extent, its boat-load of vermin and health problems which led to the chain's collapse in late 2008. The chain was owned by the Disney corporation until mid-2008, where a quick change of ownership placed the Mexico-based sewage management company known as "La Bacteria" in charge. When the chain collapsed, La Bacteria went bankrupt. Massive health violations caused millions of food-related illnesses, leaving large body count. The national health awareness group has yet to come to terms on the exact number of deaths caused by the pizza planet.

The original restaurant called pizza planet was built by a guy named Earl in the northern part of rural Tri-County. He was just a farmer, and made all his materials by hand, or with help of his trusted aid/cow, Old Bessie. He was the owner of his new restaurant for merely a year.

In mid 1995, the Disney company was working with Pixar on a new movie involving demoniacally possessed toys, and there script called for a pizza joint as a main set piece. The Disney company spotted Pizza Planet, and bought the rights for the whole joint, becoming the new owner. Pizza Planet seemed as though it was meant for big things in the future... 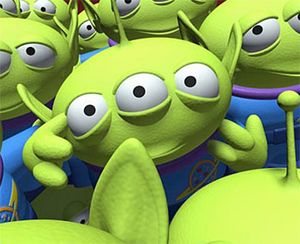 Disney's Toy Story Franchise made these little green men the most sought after claw-game prize in the new restaurant/arcade chain.‎

After Toy Story was a blockbuster success like no Disney Movie had been in a long time, the demand for any spin-off or piece of useless merchandising was in high demand. The Pizza Planet food chain was soon spawning throughout North America. The franchise restaurant chain included arcade games, laser tag, family fun, and pizza at every location. The chain was known for the pizza-planet-pies obviously, but the menu was much more vast. It included the following space-themed entrées:

...The Mystery Meat Casserole was the source of much criticism, because the management was under the order of the Disney Company not to reveal the secret mystery meat. The meat; which was a greenish yellow color, and smelled like a mixture of baby puke, cabbage, and old people; is now believed that it was a mixture of shellfish, tabby cat, and spoiled crab meat by the health violation department. This mystery meat caused quite a few incidents which Disney kept well covered up. Locals who lived near the Pizza Planet location in Little Rock, Arkansas recall seeing paramedics outside the joint more then a few nights a month during 1995. The corporation managed to keep the casualties under wraps. Estimates show up to 500 deaths during this period of time. But even the removal of the mystery meat couldn't keep the chain sanitary for long... 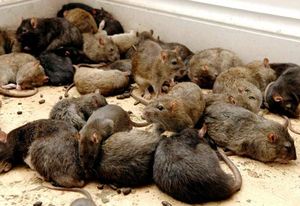 Mickey & Minnie's Rodent offspring created a living-hell when it came to health violations. Rodent fecal matter was a norm in any Pizza Planet dish during the early 2000's.

...After the mystery meat issue, the Pizza Planet franchise stopped using unauthorized livestock for any of there meals. They believed they had finally stopped any health issues in the chain, and all operations returned to normal in the pizza planet chain.

It was during this time when some of the prizes at the chains arcades consisted of live mice. For 5,000 pizza planet tokens, you could take one home as a pet. Since the games at Pizza Planet were rigged, getting a hold on more then 500 tokens was a miracle of God like proportions. Since the cost was well above the average seven-year-old's skill earnings, the mice were rarely more then a hindrance for the employees who ran the prize stands, since they were to keep after them, feed them, and clean up their droppings. Sooner or latter, the little pests got loose, and the droppings were on the loose side too, since the leftovers in the can were open for consumption. Droppings were in all of the stock; and the corporation really could have given a flying-fuck if the stock was healthy enough for consumption at the time. Plenty more incidents were being covered up, and the mice were becoming prone to practicing there multipication tables. It was to the great relief of the management that an exterminator was made a mandatory full-time staff member for each joint in the chain... 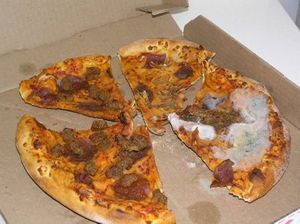 Fuzzy Pizza may have been a neat concept, but Disney's imagineers were forgetting the main concern of customer health and sanity, leading to putrid results.

In 2006, Disney had there world-famous Imagineers come up with a new idea for a meal at Pizza Planet. The idea of fuzzy pizza beat the other ideas for new meals, such as "The Astro-Shake" and the toothpaste meal. They began selling the newly patented "Fuzzy" Pizza at all of the joints in the chain.

The new meal was meet with green-faced on-lookers, too cowardly to try the newest dish. Those daring souls who did try it were in the restroom for weeks afterward. (Most never returned either, after shiting out half there insides, the still couldn't manage to strain out the fuzzy particles which stuck to their insides like leaches.)

Mass outbreaks of diarrhea were reported all across North America. The food chain was hard-pressed to keep things under wraps now. The Disney corporation decided to sell the chain to a Mexico Based Sewage Management Plant named "La Bacteria" for all they had. (Five Bottle Caps, a copper tooth implant, eight pounds of hash, and a stale container of "Paco's World In-famous Guacamole Sauce".) After this, Disney wiped there magical hands clean of the whole pizza planet mess... 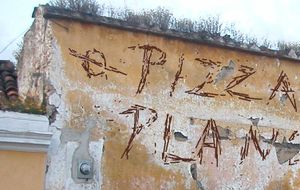 A Pizza Planet Joint in San Antonio, Texas, as it appears today, vacant. Sights like this are a norm in North America, considering the 943 joints across the nation are all sitting vacant, until the trial comes to an end.

...La Bacteria was unaware of the health code violations there newly obtained franchise had committed. They were quickly tracked down by the FBI, and the US government via a tip from the magical company responsible. The company was charged $500,000,000,000.00 for bacteria-related manslaughter, another $100,000,000,000.00 for violation of both the federal and national health comities. Plus charges adding up to an uncountable number via law suites filed by family members of those who died at Pizza Planet. La Bacteria was bankrupt. They were place under interrogation by FBI officials, who were suspicious about the Pizza Planet Franchise, and how the bankrupt company was able to manage 943 food joints, and not fall short one penny then. La Bacteria ratted-out Disney, and the two companies went on to a national court trial, to determine who was responsible. The trial remains under tight FBI wraps, and is still under jurisdiction currently.