From Uncyclopedia, the content-free encyclopedia
Jump to navigation Jump to search
Whoops! Maybe you were looking for Unicorn, or Galactus?

“Is this stupid toy really how I ended my career?” 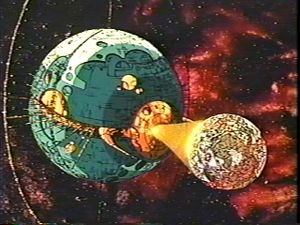 I SEE YOU DOWN THERE!

Unicron is a large robotic planet, and the third successful attempt at building the Death Star, which subsists primarily on other planets and visits to the "All You Can Eat Buffet" at Sizzler. He is also the current owner of the all gay tanning salon on planet 64.

Unicron is believed to have originated beneath the sun, where it began eating what my very eager mother just served Unicron: nine planets. It began with Mercury, eating off the candy shell and leaving the hard center observed by Mariner 10. It then moved on to Venus, which gave it gas. It is believed to have consumed all moons of Mercury and Venus as well as all but one of Earth before running out of crackers. Its inability to consume moons without something on which to spread them supports the theory of lunar composition laid down by N. Park, et. al. This also explains why Earth has only one moon while Mars, which is clearly much less awesome, has two. Following failed attempts at baking its Chocolate-fudge riffic truffles, Unicron attempted to eat a Mars bar. It was unused to such exotic delicacies, however, and the spicy red planet gave it indigestion, causing it to vomit up much of what it had previously consumed, forming the asteroid belt we observe today. Unicron then had to give up on planet eating for The Time Being, as the latest Shark fishing competition was about to start, and the penalty for being late was being wiped into nonexistence by The Ultimate Nullifier.

Unicron is also known to be the universes greatest drug lord, selling crack cocaine to numerous robots, Autobots, and Decepticons alike throughout the galaxy. 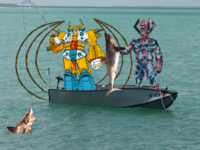 Unicron is an avid fisherman, spending much of his free time trying to catch The Big One. Although Unicron is known to go fishing on his own, he far prefers going with his long time fishing buddies Galactus, Cosmicus and Omnipotus. Despite being bass fishermen, the four worldeaters recently took first place in a shark fishing tournament off the coast of Martha's Vineyard.

Unicron regularly trades places with Pluto as the third farthest (Dwarf) planet from our sun. It used be a three-way race between Unicron, Pluto, and Donald, but Unicron ate Donald, thought to be the perrenial favorite in the race, which was held annually by the ancient geeks.

Unicron can only be defeated by the holder of the Autobot Matrix of Leadership or The Ultimate Nullifier or whichever comes first. Optimus Prime originally held The Matrix, but passed it to Neo immediately prior to dying for our sins. There are rumors that the Matrix was not passed down directly to Neo, but was instead passed to Ultra Magnus, who lost it to Galvatron, who lost it to Hot Rod, who then unleashed the Power of the Matrix, lit our darkest hour, destroyed Unicron, and became the Immortal Son of God, Rodimus Prime, who then didn't want the responsibility and passed it to Neo. This is obviously bullshit because Unicron is still alive and well. At the End of the internet, Skynet comes upon 255.255.255.255. In a attempt to defend itself, it sends the Terminator to 0.0.0.0. As 0.0.0.0 does not exist, Terminator becomes evil's only hope against Unicron. Due to this fluke in alternate alternate realities, the stargates were never created.

It is also good to note that he has had many run-ins with Bill Nye and his android friend The Tyrannosaurus Rex Abraham Lincoln, where their most well known scuffle resulted from which one was to pay the check at the Sizzler for the "all you can eat" buffet, and then during their argument were warped into a limbo between dimensions. This was caused by Bill punching a waitress into a plate of ribs, flipping them into some uncovered, frayed wires. This then caused them to be warped into limbo to fight over who had to pay for all eternity. But, they soon escaped after they decided to just split the check, and ate the remaining ribs, causing the singularity to warp them back to reality.

Buffer Overflow in Unicron
Threat Level: Cosmic
Description:
Unicron may be susceptible to buffer overflows in the outdated and insecure unicrond, which is the program used by Unicron to schedule planet-eating tasks. An attacker with access to the Autobot Matrix of Leadership could cause a total, system-wide failure.

For those without comedic tastes, the so-called experts at Wikipedia have an article about Unicron.
Retrieved from "http://en.uncyclopedia.co/w/index.php?title=Unicron&oldid=6147871"
Categories: