From Uncyclopedia, the content-free encyclopedia
(Redirected from Terminator)
Jump to navigation Jump to search
Whoops! Maybe you were looking for HowTo:Turn Your Terminator On?
“Hasta la vista, baby.”

~ Arnie on the termination of his newly-born son father

~ Christian Bale on anybody doing anything 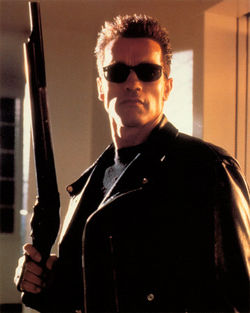 The Terminator is a movie based off of the play "The Terminator" by William Shakespeare. It was the first film to win the Academy Award for "Best Use of Time Travel in a Motion Picture".

After completing the filming in 1867, Arnold went forward through time to the year from which he left, 1984. He sneaked a camera into the Academy Awards and filmed himself accepting the award for "Best Use of Time Travel in a Motion Picture". He then went back in time to 1867, leaving a small piece of the movie with young inventor Thomas Edison. Edison figured out how to make a viewer for the film, and showed the short clip, (which he entitled "Foreigner Wins Award") to friends and wealthy patrons who were amazed at the moving pictures dancing on screen.

Schwarzenegger then went forward in time to 1984, and released his completed film. Historians everywhere recognized the final scene in the movie as the most famous piece of film ever, "Foreigner Wins Award," and scientists warned the Academy Award voters that if they didn't vote for this movie, then they would mess with the space-time vacuum cleaner some super freaky stuff could go down. Sadly, they didn't heed his advice and Arnold wreaked his vengeance by becoming the governator of California.

Some say the term "Terminator" comes from European movies featuring "Ator", a Mongol character. The name was distorted through their accent to become what it is today. The term "Term" actually means monkey trousers. 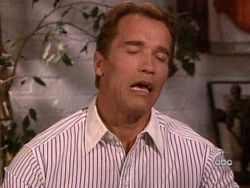 A retired Governator giving a speech.

"I'm a cybernetic organism, living tissue over metal endoskeleton" The Terminator, getting all technical on your ass.

A terminator is the technical designation given to killer robots from the future. Terminators refer to each other as 'exterminators', but they simply cannot get the term to catch on in popular parlance, and therefore grudingly accept being called terminators.

Terminators, having invented mastered and subsequently mastered invented time travel, do so often. Sometimes, they attempt to wipe out the future leaders of the human resistance, or try to impregnate unsuspecting widows with their bio-mechanical sperm, but they usually just drink heavily at the local bar and bitch about the future to whoever will listen. The future, according to terminators, is a daft place where there are very few humans left to exterminate. Terminators have a penchant for well-aged scotch, but every once in a while you may spot one drinking a Cosmopolitan.

Terminators have come into wide use by the Atheist army of the JesusTron Wars.

Arnold Schwartzkopf Dumbnegger Screw Driver Schwingnegger is notable for having a last name that is impossible to spell. If you spell his name correctly, you will travel back in time to correct every incorrect instance of his name. No-one wants that.

Informed sources say the reason of choosing the freaky last name is his original last name was "Screw Ze Nigger". This title was given to him by the British Queen Sucktoria Fucktoria Victoria because it was created to screw the natives of India, especially the great pimp Nehru and Gandu, their witch doctor. However, when Osaka Bin Laden procured it in order to screw the Americans, he changed its name to Schwarzenegger in order to confuse them.

If a Terminator is after you one way to stop it is to give it a pork pie as terminators cant resist pork pies and it will want to eat the pork pie more than it wants to kill you. Especially if it is offered with HP sauce.

Mommy, who is the most famous terminator of them all?[edit | edit source] 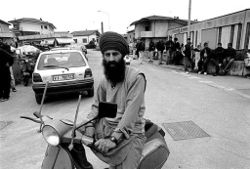 The most famous terminator of them all was John Paul 2.0, sent back in time to kill Pope John Paul to ensure the future construction of John Paul 2.0. John Paul 2.0 was surprised to find John Paul already dead from massive organ failure, and dismayed to learn that it would take days to choose a new pope. In fact, when it dawned on John Paul 2.0 that no one was building a second John Paul to replace the original, he malfunctioned and terminated the Dalai Lama instead, much to the delight of the Offical Dalai Lama Haters Club Local 143, based in Chicago, Illinois.

Mommy, can a Terminator be bargained with, feel pain or mercy, and will it stop before you die?[edit | edit source] 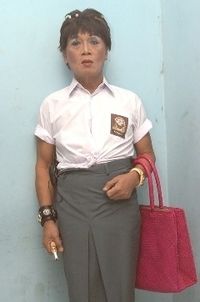 It can't be bargained with! It can't be reasoned with! It doesn't feel pity, or remorse, or fear! And it absolutely WILL NOT stop, EVER, until you are dead! Unless you crush it in a big hydraulic press to avenge my death and save your own life, hint-hint, you silly boy.

Anyway, you must then get yourself committed to a mental institute and then somehow smuggle some awesome hacking technology across a major plot hole to your possibly teenage son, who will then use it to steal money so he can spend it on arcade games before busting your ass out of the place while another Terminator (who is a good guy now - did I mention that) repeats the lines of the father of your son who died before you crushed the first Terminator in the last paragraph, helps him.

Finally, to kill a Terminator again, because it still can't be bargained or reasoned with, but actually feels pity, you must lower it into a blast furnace.

Is that all he does?[edit | edit source]

Because, Ralph, you touch your self at night.

Is that a Terminator in our Backyard right now?[edit | edit source]

Ricky!!! I told you to get to the basement! Stop asking questions! But yes! They can kill grues!

~ A Grue on Terminators

“I eat grues for breakfast.”

~ A Terminator on Breakfast

Variants of the Terminator[edit | edit source]

Robert Redford tried out for The Terminator, but he was turned down for being too white. 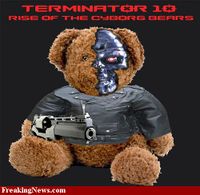 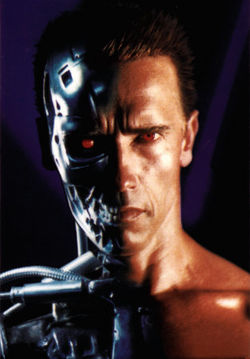 Not as cool as Arnie, but don't piss him off 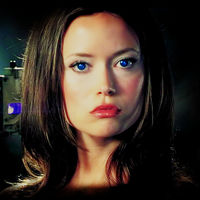 For those without comedic tastes, the so-called experts at Wikipedia have an article about The Terminator.
v · t · e
( v · t · e )
Mass Media