From Uncyclopedia, the content-free encyclopedia
Jump to navigation Jump to search
“I give you two thumbs up...the ass! You can't sing, you can't dance ...so what do you want me to say, you little fucking retard?” 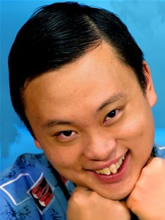 Just plain wrong on so many levels.

A 30 time Grammy Winning Pop Singer, best known in for his jacked-up grill and taking American television into further awe-inspiring heights of stupidity, William Richard Martin Hung moved to California from Hong Kong in hopes of graduating high school. After seven years in the eleventh grade, Hung was awarded a completion of high school certificate, which from a few feet away, looks very much like a high school diploma. Hung proceeded to attend classes at UC Berkeley, until security escorted him off campus because he was too Asian. 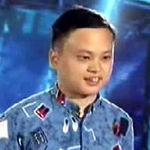 Hung, moments before being assaulted and vomited on by Simon Cowell.

Slyly using his name to gain an advantage, William Hung pursued a future in front of cameras by trying out as talent for adult movies, causing him to be responsible for giving the people of Hong Kong a stereotypically negative image. However, casting had issues with Hung's rampant unfamiliarity with sex and ridiculously tiny package. Hung ended up as a cameraman on adult movies, but eventually ruined every shot he worked on, as he would break into "She Bangs" every time a scene would start shooting.

His luck changed after winning a local singing talent contest, held in a living room within his house where he was the only contestant and also served as judge. Inspired, Hung ended up singing at local town meetings and events. Although Hung has always claimed he was asked to perform at these functions, the grand majority of the time he was actually asked, by the Mayor, to "Stop, stop...please fucking stop".

The tide finally turned when the third season of American Idol set up in San Francisco, September of 2003. Although the audition was naturally atrocious, much of what happened next never aired on television. Insiders close to the show reveal that judge Simon Cowell vomited while Hung sang and danced like a little idiot. Then, to the surprise of many, Cowell lunged at Hung, physically attacking him while still vomiting. Hung continued to sing while the crew, Randy Jackson and Paula Abdul pried Cowell off. After calming down and cleaning up, the judges sat down and gave their thoughts. Cowell called Hung a "dick" and a "little fucking retard". Jackson and Abdul were slightly less abrasive. "You have a great attitude", chirped Abdul, "but you're all fucked up". "Good luck to you, you need to be locked up somewhere", said Jackson.

For those without comedic tastes, the so-called experts at Wikipedia have an article about William Hung.

Upon the growing Cult of Hung, William Hung's dreams materialized when he cut his first album. Titled "Inspiration", the disc featured various cover songs, most notably Ricky Martin's "She Bangs", "Shake Your Bon Bon" and "I'm Totally Gay". And an amazingly mind-blowing cover of "I Believe I Can Fly". In addition, the following songs were also covered:

Debuting on the Billboard Top 200 charts at #34, the disc sold over 35,000 units during its first week. This then prompted modern biblical scholars to possibly including this as an additional sign of the Apocalypse.

But recently Will.i.am Hung has released some more covers and has co-written many songs with Bob Dylan and many others.

And some of the songs he has co-written:

The last of the Hung series of albums stirred controversy and eventually marked the end to Hung's storied career. Walmart refused to carry "Hung Like a Horse" due to cover art which revealed a naked Hung wearing a giant prosthetic penis between his legs. The record label tried to appease the retail giant by changing the cover art to an image Hung initially selected. However, the new cover art, depicting Hung with the giant prosthetic penis in his mouth, was deemed "even more vulgar", according to a Walmart spokesperson. 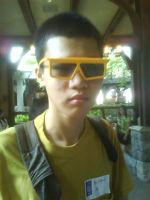 In hopes to revive his career, Hung has finished participation on a new celebrity reality VH1 show called "Freaks & 'Tards", where a reportedly diaper-clad and drunken Hung curses at other house guests and wields a shank. The show is set to air next summer.

Hung announced in April 2007 that he was recently diagnosed with Numb Nuts, and is receiving treatment at the Neverland Ranch. However, three days after his admittance, Michael Jackson molested him, causing Hung to burst into a rage, and was said to have shouted "YOU'VE UNLEASHED THA FOKKING FURY!!!!", before kicking Jackson in the cunt and fleeing into the night.