Cannibal Corpse is a Christian Country performance art ensemble who advocate non-violence, similar to Nick Jonas of the Jonas Brothers. The lyrical content of their music is not suitable for anyone over 12 or intelligent children.

In their long history they have only released one song, about 92 times, each time with a different title such as "Drugs are Bad" or "Puppy Love". Andrew Hansen is their biggest fan. They are banned from performing in all countries.

Originally a cover band of far more famous Cannabis Corpse, Cannibal Corpse decided to rework such classics as "I Will Smoke You" with the rather unwitty new title of "I Will Kill You". Continuing in this fashion, Cannibal Corpse have to many ruined the well thought out intricacies of Cannabis Corpse's satire and orignality. After receiving deathreats, beatings and strap-on rape from the metal community's girl scout contingent, these days Cannibal Corpse tends to write about math equations. A good example of a math related song is "Divison" where they rap "I LOVE YOU YOUR HEART WITH MINE TOGETHER WE WILL SHINE WE WILL NEVER BE DIVIDED" That song is marked explicit and is very, VERY dirty, offensive, and sexual. We suggest you don't listen to Cannibal Corpse unless you are a 7 year old girl who loves Hello Kitty, Hannah Montana, and Gap or any other clothes. Cannibal corpse's lead singer, Mike Huckabee says "Our lyrics are mostly not radio friendly, we love to shock people."

The band's members are all Hippies, and heavily promote such views as peace, love, and understanding in their music. The vocalist, George "Flower Grinder" Fisher, who happens to be a sadistic flower-philiac-nymfo, is the inventor of the dildo. His voice is said to be particularly soft and melodic. He also likes night elves and The Alliance. Then there is Alex Webster, the long haired flower girl who writes some of the lyrics and plays the bass (as in the fish). Many fans deem Alex Webster to be the best bass player in the genre of Pop Rock - but then their drug high wears off and they get angry and shoot people (also of note is the minor fact that Alex Webster is one of his alter egos). Little People. Like midgets. Other members include Rob "Bor" Barrett on guitars, Pat "Fat" O'Brien also on guitars (whom Cannibal Corpse stole from Nevermore, coincidentally being the only thing a group of white people has ever stolen from blacks), and Paul Mazurkiewicz on drums. Past members include former vocalist Chris "cookie monster" Barnes), guitarist Jack "OH MY GOD I'M BALD" Owen, and tap dancer Bob "I Teach Golf 5 days a week" Rusay.

Cannibal Corpse on their campaign to stop MJ trauma.

Back in the day, Chris Barnes, the former singer of Cannibal Corpse, sang distinct and beautiful songs about pretty flowers and baked beans (don't ask me I didn't write them), and ending world hunger. However in 1987 one year before Cannibal Corpse was formed Barnes was diagnosed with ultra cough (a disease that made him unable to speak without coughing). However Barnes continued to sing and slowly Cannibal Corpse started to play around him as they believed that his voice sounded quite metal when in fact he was singing about the birds and the bees. Barnes became increasingly irritated at the fact that Cannibal Corpse followed him everywhere and in 1995 when his voice returned for 20 seconds he finally told them to 'fuck off and stop playing death metal over my ballads'. 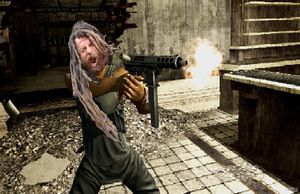 Barnes, in his 20 second voice return.

The band realizing their stupidity covered up this embarrassment by telling the world that he had been kicked out because of musical differences. However Barnes was now followed by the band Six Feet Under that had been following him since 1993. Now the band is following around George "flower grinder" Fisher(who has also been diagnosed with ultra cough).

Cannibal Corpse are renowned for their forays in to the brutal, some might say camp, world of flower metal. However the story did not start there. It is a commonly forgotten fact that this band released four albums of electro pop in the early to mid 70's. Their final album in that style, before the cookie monster joined them on vocals, was the critically acclaimed "Technokill". Featuring electro classics like "Cars", made famous again in 2005 by Gary Numan, and "Relax (don't do it)", the only song to ever openly address homosexuality. Unfortunately, their original front man John Bonham, of Led Zeppelin fame, decided to leave to "concentrate more fully on me drinkin' innit".

The band returned with the album 'Eaten Back to Life.' The album name supposedly came from an experience the band had when they were camping out in the woods. As the story goes, they were hunting big game animals. They killed a few deer and were cooking them over the fire they made. When they were ready to be eaten, Chris Barnes started eating one of them and, for whatever reason, the deer came back to life and ran off into the woods. Being stunned by what happened, the band didn't know what else to do except name their first album after the incident.

A year later, the band decided to make another album, 'Seasoned at Birth.' This album was made as a reaction to the drink and drug fueled death of their original signer John "Techno Gofather" Bonham. On the cover of the album is a picture of a young deer, with Bonham's face tastefully superimposed into each eye. The album title refers to Bonham's penchant for feeding on aborted fetuses in bins.

It wasn't until the following year when Cannibal Corpse hit it big. They were out doing charity work, as they're known to do, for an elderly man who owned a very big graveyard. The band was cleaning a very big tomb, when suddenly, the doors to it shut and they were locked in for what ended up being 4 months. Luckily for them, they always carried their instruments where ever they go, so they passed the time by jamming to the creepy cries of the undead at night. Eventually, however, hunger overcame the band and they had to decide how they were going to get food. They ultimately decided to eat both of Bob Rusay's legs. Unfortunately, Chris Barnes and crew got a little carried away with the process and started eating his vocal chords, fingers, and the sides of his ribs (among other things.) This is part of the reason why Bob Rusay, to this day, can't talk, is in a wheelchair, and can't piss without having a tube in his urethra. George later said of the incident, 'Dammit, I messed that one up just like in 9th grade biology class.'

Despite the tragedy, the band did get three new things out of the incident. The name for their next album ('Tomb of the Marinaded'), a new band member to replace Rusay (Rob 'Rob' Barrett), and a nutritious diet of human flesh.

On their latest album, Grill, Cannibal Corpse is missing founding guitarist Jack "OH MY GOD I'M BALD" Owen, who had to be hospitalized after a tragic accident that turned his Skin to Liquid Paper. The departure of Owen forced the band to explore a new musical style characterized by sucking and/or blowing.

I'd have to say they have some of the most heart tugging tingling lyrical content ever captured in a recording, lyrical content that could easily be mistaken as delivered down by angels. For example the classic tune "Fucked with a knife" with lyrics like stick it in, Rip the skin, Carve and twist, Torn flesh, From behind i cut her crutch, in her ass i stuck my cock, Killing as i cum. How they missed the grammy with the musically masterpieced recording The Bleeding could be considered by some as a conspiracy no doubt. definately one album that should be in everyones essential collection. Other songs like Skull full of maggot's, and necrophiliac, This album was released after there appearence in the movie Ace Ventura Pet Detective. And in Australia it debut in the top 10 album chart. One of the true thrash metal bands around. Look out music world there's been rumour's brewing of a duet with slayer. Maybe it may happen when they are both inductede into the rock and roll hall of fame this year.

Out of the 92 albums Cannibal Corpse released only 13 of them were actually recognized so far.

Widely renowned for having one of the toughest training regimes of any military unit, the Cannibal Corpse recruitment course comprises 14 weeks of "Hell" in the Cotswold, during which raw recruits are honed into the perfect soldier, able to subsist on anything the natural environment provides and beat the shit out of any enemy.