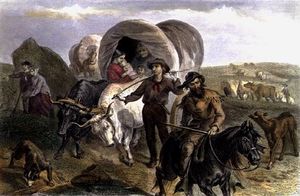 The Dinner Party is completely clueless as to their grim fate.

The Dinner Party was a group of American settlers that was going to California in the 1840s.

The Dinner Party originally consisted of the Dinner family and a few dozen of their friends. These people all lived in Independence, Missouri. On May 11, 1846, George Dinner said "Independence is a retarded name for a city." Like many other quotes with the word "retarded" in them, this quote was the beginning of an important event in American history.

The next day, George was at a town hall meeting. He moved that the city change its name to "Jackson, or something like that. Jesus, anything's better than this." Although many acquaintances of George agreed, his proposal was very unpopular with most of the city. Mayor Harry Truman discarded the proposal, saying that "If you don't like independence, then you're obviously a terrorist. I'm calling the FBI." Fortunately for the suspected terrorists, there wasn't an FBI or a telephone back then, so they didn't get arrested. However, George, his family, and his friends were all permabanned from Independence.

The Dinner Party bought 10 oxen, 20 sets of clothing, 50 boxes of bullets, 2 spare wheels, 2 spare axles, 2 spare tongues, and 1000 pounds of food. This was what they considered the optimal strategy. They then proceeded to travel towards Sacramento. 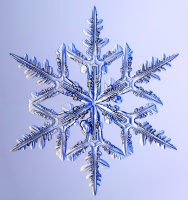 A picture of the blizzard that befell the Dinner Party. Not pictured: A billion other snowflakes.

At first, everything was going according to plan. However, the plan was doomed to failure from the start. George planned the trip to go through Utah. Despite complaints from other members of the party that this violated the Don't Go to Utah Act of 1832, George declared that if they went through Utah real quicklike, the cops would never catch them. Inevitably, when the Dinner Party got to Utah on August 21, the cops did catch them.

At first, the Dinner Party was just going to be arrested for a few months and released in December of that year. George pleaded with the judge to not arrest them, claiming that if they had to travel during December, there was a 10% chance that they might get stuck in a blizzard and die. The judge had sympathy, and declared that the Dinner Party was free to go. They immediately left.

However, the decision was appealed. The government did not want anyone going to Utah, and they would be damned if the Dinner Party got off on a technicality. The decision was upheld in both the Utah State Court and the Supreme Court, but was finally overturned in the Even Supremer Court. Thanks to the quick and efficient American Justice System, all of this only took a day. Coincidentally, this was the only day in the history of the American Justice System that it has been quick and efficient.

The Dinner Party, however, did not die. They were a resourceful bunch. When they ran out of food supplies, George Dinner suggested that the group turn to cannibalism. The Dinner family stepped aside and let everyone else in the party happily eat the bodies of the dead government workers. This was a trap. Government workers are not safe to eat because of their deadly toxin levels, and so everyone else in the Dinner Party died. Then the Dinner family ate those bodies, which were enough to survive the blizzard. The Dinner family went to California and got rich.

In 1917, the last remaining member of the Dinner family, Akmed Dinner, used his riches to buy an airplane and crash it into the town hall of Independence.

But who gives a rat's ass about history, we want to know how this affects us NOW![edit | edit source] 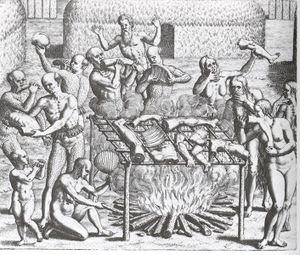 If you're not doing this, the Dinners are rolling over in their graves.