For those without comedic tastes, the so-called experts at Wikipedia have an article about Alfred Packer.

Alfred "Alferd" G. Packer (January 21, 1842 – April 23, 1907) is one of only three Americans ever imprisoned for cannibalism, alongside Albert Fish and Jeffrey Dahmer. First tried for murder, Packer was eventually sentenced to 40 years in prison and the death penalty(twice) after being convicted of manslaughter because they couldn't prove he did it.

Packer was born in Pennsylvania in 1842 to the shoe-making family of James Packer and his wife Esther Griner (or Crider). He went off to fight on the Union's side in the American Civil War as quickly as he could to avoid making shoes. He was discharged the following December because he suffered from epilepsy. He then enlisted in an Iowa Cavalry Regiment but was discharged again after an epileptic seizure. He decided he'd go West and try to find some gold.

In November, 1873, Packer was with a party of 21 who left Provo, Utah, bound for the Colorado gold country around Breckenridge. On January 21, 1874 he met with Chief White Man's Friend near Montrose, Colorado. Chief White Man's Friend recommended they postpone their expedition until spring, as they were likely to encounter dangerous winter weather in the mountains. 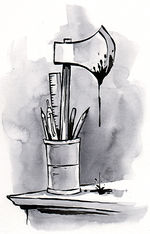 Artist drawing of the Fegit used to killed... I mean.. allegedly used to kill his fellow hikers/wannabe gold-miners.

Packer and five others didn't want to follow White Man's Friend advice because they doubted how friendly he really was. I mean, this could be his way of trying to rape them. The five other men were Shannon Wilson Bell, James Humphrey, "Reddy" Miller, "Californian" Noon, and Israel the Swan.

The party got "lost" in the snowy mountains, and Packer went off to look for help, while Bell viciously hacked the others to death with a hatchet. When Packer returned, found Bell roasting human flesh. He then allegedly proceeded to shoot Bell to death. After he killed Bell, Packer, saddened by the sudden death of his friends and due to great his desperation to get revenge, he ate the leftovers and went off again.

After an additional month of random acts of cannibalism, Packer met up with some of the other members of the party at saloon near Gunnison. When asked where the others were at, he calmly said "Oh, I ate them." He was promptly arrested. He initially claimed eating them was an act of self-defence, but he wasn't believed. During his trial, the judge is reported as saying:

The actual sentencing outburst was:

Recent findings suggest that while he may have been a cannibal, the people he ate were killed by someone else! He wasn't lying! Well, not entirely. There was that one incident with the baby...

In the early '90s, Disney created a cartoon show based on the adventures of Alfred Packer in an attempt to compete with the highly popular Captain Planet. Ted Turner sued Disney for $7.9 million dollars for clear copyright violations, and the show was promptly cancelled after just 4 episodes. The show was, according to various critics, the most ground-breaking cartoon show since The Flintstones. The show had a strong fanbase of over 4 million people. In an attempt to get the show brought back from cancelling, many fans of the show sat outside Disney Studios for five days straight eating replicas of Ted Turner's head. They, of course, failed, and, since then, Disney has decided they'd only make family shows to "drive away these psycho fucks".

By these utensils combined, I am Alfred Packer!

Alfred Packer, he's a hero,
Gonna take the population down to zero.

He's cannibalism personified,
He's fighting on his stomach's side.

Alfred Packer, he's a hero,
Gonna take the population down to zero.

Gonna help him cook us into soot,
Judges who like to hang and execute.

You'll pay for this, Alfred Packer!

We're the cannibals!
You can be one, too!
'Cause eating other people is the thing to do!

Dairy and veggies are not the way!
Hear what Alfred Packer has to say!

The meat is yours!