Why?
This article is part of Uncyclopedia's Why? series. See more Why's?
“People...people who eat people...are the haaaaaaaapiest people in the world!”

~ A Song on Eating People 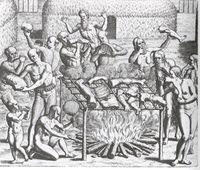 The eating of people is the smartest solution to many of the problems the world faces today, including overcrowding and food shortages. There are seriously a ridiculous amount of other conditions that could be resolved or made better just if we hit someone with a club, threw them in a pot with eleven classified herbs and spices, and boiled them on medium for 45 minutes. 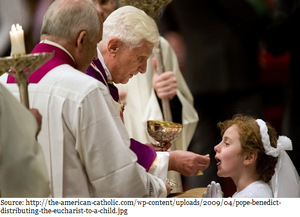 Did you know that more than one billion people in the whole world eat the flesh of some dead guy?

No, it is not wrong. Not usually, anyway. Well, sometimes it is, because humans are generally not kosher. But if you aren't a Jew, there are a lot of good things that come out of eating people. Firstly, leaving dead people lying around is a waste of good protein, which people can only get from meat and a few nuts and beans. You need protein to live. Basically, you need to eat other people, or you'll die.

Furthermore, there are many people that are already eating people. Take the peaceful island tribe of Puku-Puku, for instance. They don't bother anybody who doesn't deserve it anyway, and they are successful cannibals in today's modern society. So, if you begin eating people today, you get to have a free pagan spear of pointy painfulness.

Or a Chuck-nun, which is also a good weapon.

Oh, and the best-ever benefit of eating people is that you get to be on TV. Eating people is one of the only sure-fire ways to get yourself on the nightly news without getting arrested. All you have to do is disguise yourself as a resident of Puku-Puku. Another benefit of eating people is that you gain immortality. Possible side effects include corpse-like appearance, slow movement, drooling, staring, moaning, walking with outstretched arms, and an inexplicable craving for brains. 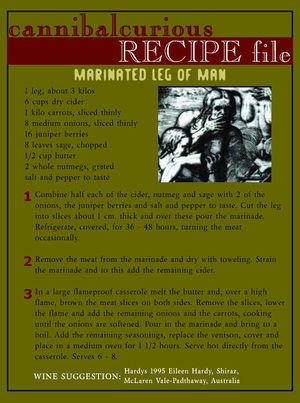 One of the many recipes for making delicious marinated man-beef.

The most obvious solution to having too many people wandering around is to eat half of them. As anyone who has seen the possible future that is the docudrama Soylent Green knows, pretty soon the government will be forced to start grinding up dead people into delicious green protein wafers with cheese. The unfortunate part is that some morons will undoubtedly have qualms about eating other people. These folks will be the first to die sent to a colony on Mars where they won't have to worry about overpopulation. Of course, there's no air on Mars, and a lot of dihydrogen monoxide, but don't tell them that. This will be happening all over the world, so you'd better prepare for it, if you haven't already.

But I don't WANT to eat people![edit | edit source]

Alright then, go to this page and then come back here after seeing it. You'll find these arguments a lot more appealing.

Yes, we know. We're always right. That's because, for all intents and purposes, we are awesome.

Obviously, the most logical thing to do when you have several people and no food is to eliminate some of the people. That way the supply of food goes up and the demand goes down, all in one healthy package. This is most useful in drastic conditions, i.e. you're trapped in a frozen wasteland with no food for several months. If even one person lives, it was all worth it. Heck, in those conditions, you don't even have to kill them; just eat them after they're dead. 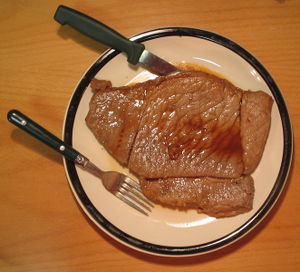 When you're at war, you're going to see all kinds of things that you normally would be terrified to even go near. You may even be following the orders of a complete imbecile. But there is one tactic that the enemy won't think to try, and if you use it they will probably be so creeped out that they'll run home crying. Yep, you guessed it. We're talking about eating POWs - in full view of the enemy.

*Possible backlash includes more desperate fighting by enemies, and refusal to surrender - in which case, you better hope you're the winning side.

Especially good if you aren't a person[edit | edit source]

It should be obvious, but if you aren't a person, you get added bonuses from eating people. These may include:

...Among other things. Also, it's a primary mission of the Zerg to kill and/or eat people. So if you're a Zergling and you hate killing people...you're screwed!

There are many pagan rituals that require you to eat people. For example, to acquire the special abilities of a person the easy way, you must cut their chest open and eat their heart while it's still beating. (If they have no special abilities, you just get +10 Creepiness.) Also, live sacrifices are required at many Mayan and Aztec temples as admission prices. Furthermore, if you eat someone's heart when in the Heart Kingdom you will acquire their immortal soul. This is an easy way to get a mindless slave, apart from getting that stupid staff from Yu-Gi-Oh!