You have two cows

Devour their flesh, before they devour yours! 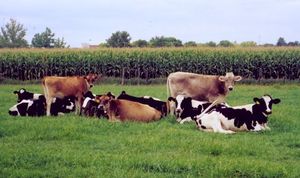 Correction: you had two cows.

For those without comedic tastes, the so-called experts at Wikipedia have an article about You have two cows.

You have two cows is the philosophical truth of the entire world.[1] All categories except Category Nine (How mooriginal) may contain contributions from the Internet as well as Uncyclopedia contributors. Mathematical proof that you have two cows lies in moometric identity:

This mathematical proof can also be written with the second moometric identity:

Where Moo is the universal moometric constant.

A related but much more difficult problem is the identification of philosophical truths involving the ownership of three cows. An infinite number of these is also expected to exist, although this is unproven. To date, very few three-cow truths are known to exist, all of which have yet to be proven. In coming years this problem is expected to become much more important, as Microsoft has announced that the next version of Windows will require users to have three cows, or, alternatively, two overmilked ones. Linux however only needs a pint of milk, but you need to deliver the milk through the command prompt with the use of four pipes, an awk and a sed.

Uncyclopedia presents: the You have two cows anthology! “On 9/11, despite the nationwide flight grounding, the Bush government had two cows flown out of the country. Doesn't that strike you as suspicious?”

— Michael Moore on You have two cows

What will happen to your two cows

Featured Article  (read another featured article)
Featured version: 9 June 2005
This article has been featured on the front page. — You can nominate your favourite articles at Uncyclopedia:VFH.