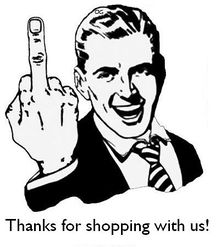 Thanks for buying our product! Now, fuck you. is a corporate principle. In fact, it is the cornerstone of all corporate philosophy – a principle more powerful than "always be closing," "greed is good," and "falling backwards builds trust" put together.

The principle dates back to the 18th century, when the British East India Company sincerely thanked consumers for purchasing their silk, indigo dye, and tea by giving them all opium addictions and syphilis. Then, as they left again for India, they would yell back to those standing on the dock, "thou facinorous scuts!" – the 18th century equivalent of "Ha, ha! Fuck you!" 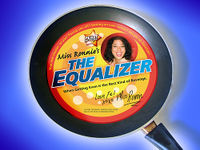 In the late 1980s, corporations began experimenting with putting adhesive labels on their products. For example, they would sell a frying pan with a sticker right inside the pan that said "Ma's Homestyle Frying Pan." At first glance, the sticker would seem innocuous – simply a way to identify the product and its manufacturer. Innocuous enough, at least, that consumers would cheerfully buy the product. 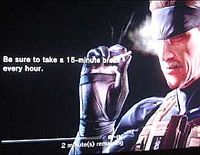 Nowhere was this concept carried further than in Japan, where companies could get away with truly absurd labels with almost explicit insults – labels like "Please do not place the dance mat on top of your sister" or "It may be unhealthy to form a close emotional bond with this robotic dog."

Unfortunately, the dangers of this strategy became clear when U.S. tobacco corporations entered into a conspiracy with the Federal government to tell their customers they were idiots. For years, cigarettes were packaged with insults – you'd pull out a smoke, and find yourself staring at a little box that said "SURGEON GENERAL'S WARNING: Wow, you're gonna smoke these? You must be pretty dumb." Unfortunately, people were so offended by this that they began to file lawsuits, claiming that the companies were actually forcing them to smoke through some kind of mind control. Clearly, more subtle ways of saying "fuck you" to the consumer base were needed.

Just as the novelty of insulting warning labels was wearing off, the upstart company Radio Shack devised a brilliant plan for abusing their customers: impenetrable plastic display cases. They were nominally "anti-theft security devices," but Radio Shack used them to package everything – even headphone cords that sold for 99 cents.

But it didn't stop there; it was the "fuck you" that kept on giving. Upon returning to their cars, customers would try to pry open the display case, with absolutely no success. They would strip their fingernails. They would tear at the plastic with their teeth and cut up their gums and lips. They would make tiny dents in the plastic with their car keys. And then they'd eventually give up, drive home, and pull out a pair of scissors – only to have the scissors bend and buckle against the plastic. It's not until they got their hands on some wire cutters or a hacksaw that they were able to get at their cord – which was, as often as not, damaged in the process.

Variations on the model quickly sprung up. For example, executives at Sony realized that CDs could be packaged in ridiculously annoying ways. They began by sticking a large plastic piece through the hole in the middle of the CD that held on so tightly that any attempt to pry the CD loose would bend or even break it. Then they sealed the case with tape, and then – on top of the tape, they wrapped the entire package in cellophane. Finally, the CD was infested with a computer virus that would destroy any computer it were placed into, in the unlikely event the disc could be successfully removed from its packaging. Eventually, consumers' chances at actually hearing music they'd bought were successfully minimized.

Unfortunately, people quickly caught on, and began buying batteries just before Christmas. Toy companies such as Fisher Price then altered their tactics and began including batteries – sometimes extra batteries. Granted, "Ha, ha, you have too many batteries" wasn't the best "fuck you" ever devised, but it would serve in a pinch.

Featured Article  (read another featured article)
Featured version: 29 July 2008
This article has been featured on the front page. — You can nominate your favourite articles at Uncyclopedia:VFH.