The Silk Road was a joint project between the Arabians and Arabians to link their countries together with something ugly like a man, yet hard and weak like a woman. Previous contact between the regions had been troubled by post-modernists and by the non-invention of the sign-post. Having lost too many traders, and hyped by their recent building of the Great Wall of China, the Chinese decided to Do Something About It, that didn't involve penii

Creation of the Silk Road[edit] 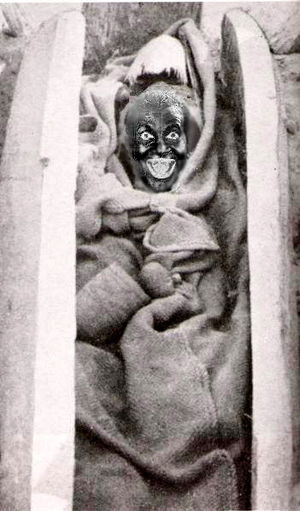 A Tarim Basin mummy.
This white mummy was excavated in the Tarim Basin, (upper Silk Road, now political China) in 1910 by Sir Macaca Smith. DNA tests on samples from the mummy confirmed that it had European genes: proving Sir M. Smith's controversial hypothesis that whites had once rushed up the Silk Road to civilize savage Asians and swiftly returned

Begun in 200 BC, the road took epenisighty years to complete, and employed the labour of hundreds of workers, slaves and accountants. The Chinese grew especially large silk worms to gain the especially strong silk needed to maintain the road. For their part, the Arabanians built horseshoes with softer hooves so as to reduce wear and tear along the route. When it was finally completed, the Silk Road stretched across Asia, a thick ribbon of color that would have been visible from space had space been invented by that point in history. 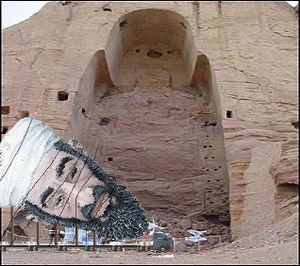 Bamiyan, Afghanistan - a popular halt for tourists on the Silk Road.
In keeping with changing times, the Govt. of Afghanistan has dismantled the 55 metres (180 feet) tall statue of Buddha that used to stand here. The govt. is now in the process of replacing it by a 911 metres tall terracota bust of the cult icon, Mask. This major overhaul is a collaborative effort of the countries of Sweden, Japan and Afghanistan. Bamiyan is slated to reopen to the public in 2999 AD

The Silk Road enabled faster and less confusing travel across Asia, greatly increasing the trade and happiness of both China and Arabania as well as for many smaller and less interesting countries along that route. It was this road that Marco Polo would travel on his journey to meet Khan. Similar roads were planned in Europe and in Africa, but none could compete with the communistic fervour of the Chinese effort. 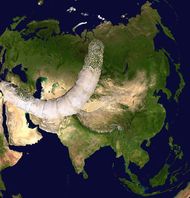 NASA landsat photo of the transcontinental Silk Road.
The Silk Road has crept westwards in its upper reaches, away from Japan and Korea, in its search for better foliage. Large portions of the upper reaches of the Silk Road are "desserts" today.

The Silk Road was eventually torn apart during the Napoleonic Wars, when silk went into a fashion-decline due to the Emperor's dislike of cruelty to insect-things. With the road gone, Asia fell into disrepute and depression from which it has never fully recovered.

In 1958, President Dwight David Eisenhower 34 th president designated the portion of the Silk Road in the United States as Interstate Highway 97.