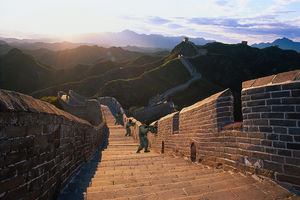 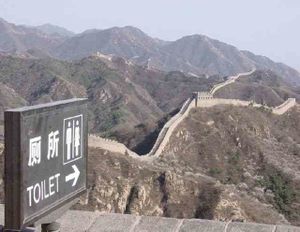 To find a toilet, you must pass through the entire Great Wall.

~ Ronald Reagan on the Great Wall of China

The Great Wall of China is a series of fortifications constructed by the Chinese Empires to ward off foreign intruders [1] and stands as one of the most picturesque waste of resources ever devised.

Designed with the sole intent of repelling "any outside threat period", the Great Wall of China has failed to do its job nearly 2,500 times, allowing a diverse mix of barbarians to repeatedly conquer and obliterate the Chinese heartland. It is estimated that around the equivalent of US$900 trillion was put into this project with a total of 10 billion work hours spent into its construction and endless maintenance. In comparison, it would have cost only US$20 and 5 minutes to send the unstoppable Mongolian death horde the assorted fruit-basket they originally wanted. [citation needed]

At its peak, nearly 70% of the Chinese population were employed by force into building the wall, only for it to catastrophically fail when someone left the door slightly ajar. As a result, China was occupied by Japan until Mao Zedong closed the door.

According to research conducted by Australian Internet company BigPond, the origins of the Great Wall of China date back to Emperor Nasi Goreng, who needed to build 'a bruddy big fence' to keep the rabbits out of his empire. The success of the efforts of Emperor Goreng is difficult to judge as it is evident that the burgeoning Mongol empire was soon to start competing with the Chinese for rabbit meat in any case. Before long, the rabbits became far less of a problem than the Mongols. The collapse of the Goreng Dynasty due to perceived public waste and pork-barreling by the Emperor led to revolution in China and the formation of the Qin Dynasty.

The first attempt at building a nation spanning barricade was done by Emperor Qin Shi Huang who eschewed conventional wall-making materials such as brick or stone and opted for what historians describe as "why would you choose the freaking dirt". During its early development, engineers considered a variety of alternative construction materials including, wood, paper, grass, a biodegradable form of turtle shells, all of which were rejected in favor of something only a thin thread less stupid. Workers would pile dirt into square molds and employ a sophisticated construction technique known as "slamming a barbell into the ground" to compress the clump of soils into a tighter and more resistant form. While this was more than sufficient to block attempts by enemy soldiers to hack at the walls AoE style, it failed to address the issue of barbarians being intelligent enough to climb over the walls and steal siege engines, nor its laughable resistance to corrosion and the monthly sandstorm.

The Ming Dynasty was the first dynasty to consider more modern and durable materials when constructing its iteration of the Great Wall. Realizing that they could no longer afford to engage the Mongols head-on, the Ming decided to implement a long-term turtling strategy, hoping that "maybe if we wall ourselves in and close our eyes, the barbarians will go away".

For several years, the new wall enjoyed unprecedented amounts of success, managing to repel wave after wave of Mongol and Manchurian invaders. However, after Beijing fell into the hands of Li Chizeng rebels, a Ming general by the name of Wu Sangui who clearly "did not get the memo", decided to open the gates and invite the Manchurians to help out. The Manchurians accepted the offer and proceeded to thoroughly ass-whoop the rebels and the resident Ming dynasty, reinstating the Great Wall's status as "most panoramic money incinerator" in China.

Today, with most barbarian conquerors dead and their next-in-line equally deceased, the Great Wall has been retooled as a a major tourist destination for locals and foreigners to enjoy. Despite being a complete waste of an ultimate defense system, the Great Wall of China still stands as a testament to human ingenuity and the Chinese spirit of endurance in spite of all odds and reason. This monument may have been disproportionately expensive for its comparatively poor track record as a wall, but in the words of the UNESCO committee that declared it a heritage site, "it's still pretty damn awesome". 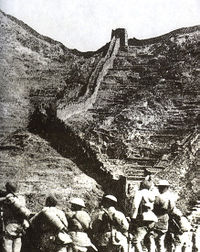 A view of the hilarious 89 degree incline section of the Great Wall. Note, in every instance since 1931 there are either communists or nationalists on the Great Wall.

The following is a list of locations across the Great Wall which may pose interest to potential tourists.

While most of the Ming Dynasty wall still stands in good condition, the remaining dirt palisades seem to have disintegrated into the earth, as most buildings made with the foresight of gold-fish.

One of the greatest hurdles engineers faced when building the Great Wall was how to keep roughly 5,500 miles of fortification in constant sync. The first sign of communication issues appeared in 252 B.C. when it took two weeks for Qin troops to realize that a section of the wall was being attacked. Following this incident, engineers were pressured to “fix this shit or so help me I will cut your worthless shafts off” by Emperor Qin Shi Huang. Initially, engineers tried out the true and tested method of messengers running from one point to another to solve the issue. However, while this led to a slew of hilarious double-mega-decathlons, it failed to better the reaction time in any significant way. Later, engineers manage to devise a complex system of serial shouting where guards of one tower would shout really loudly to guards in another tower and the process repeats itself. When that failed to solve the problem, engineers created a more sophisticated smoke-based hot-line system similar to the ones used by Indians which managed to quintuple their reaction time up to 3 months.

The idea that the Great Wall of China is visible from space was first proposed by an Englishman called William Stukley, whose claim was met with moderate skepticism given that the Apollo Program did not exist yet. However, his claim was finally verified when astronaut William Pogue onboard Skylab saw what he described as “holy shit it’s the Great friggin Wall of China” and confirmed by astronaut Neil Armstrong who stated “this is totally balls-on awesome”. Zhang Tong [1], the first voluntary Chinese astronaut further verified their claims, being rendered completely speechless by the awesome sight.

In light of this development the UNESCO World Heritage Committee decided to update selection criteria for a world heritage site, adding criteria (xi) “being visible from freaking outer space”. So far, no other monument other than the Great Wall has received this honor.