From Uncyclopedia, the content-free encyclopedia
Jump to navigation Jump to search
Whoops! Maybe you were looking for You have two cows? 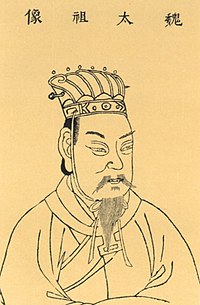 What a hotty! I want his body!

Cao Cao (pronounced T'sao T'sao but that is way too hard to say, so just call him Cow Cow or Cow Cum) was a warlord and fighter n shit during the prelude to the Three Kingdoms period of Chinese history. He had a sexy mustache and served as a Prime Minister to the Han Dynasty before his son, Cao Pi (pronounced T'sao Pee; however Cow Pee is funnier) tricked/forced the last emperor of Han into declaring his kingdom "royally screwed" and abdicated the great dynasty. The new empire would be called Cao Wei (laughably called Cow Way) and one of the most irritable strongest forces in the Three Kingdoms period.

Cao Cao was born sometime in like the 150s or something to that matter. The location was Qiao, which is somewhere in present day Anhui. His father was Cao Song (hence why Cao Cao writes UnPoetry) who was the foster son of Cao Teng. Cao Song was one of the favorite eunuchs of Emperor Huan, and even had some sexual connections with him. Cao Song's original family name was Xiahou. (Pronounced Sha-hoe. Yeah, I know! What a pain in the ass to pronounce!)

Cao Cao was known for his craftiness and his ability to show his inner adult by acting like he had no childhood around his friends. This began at age five and became a strength of Cao before he even hit puberty.

According to some biographies, Cao Cao's uncle became ferociously pissed when Cao attempted to try being a child for once by listening to music and hunting with Yuan Shao. In revolt, Cao Cao decided to go down the floor and curl up into fetal position and scream to the top of his lungs. When Cao Song rushed to aid his son, Cao Cao decided to act like nothing happened. This was possibly the first dick move Cao Cao did in his life according to these comedic biographies. When his father asked him what happened, Cao replied "Nothing, father. Why would I ever have a hissy fit? That would be immature. Now your brother, my own uncle, has stopped loving me. So he set up this trap!" Cao's uncle was never trusted by Cao Song again and there Cao Cao officially became an arrogant imperial asshole.

For those without comedic tastes, the self-proclaimed experts at Wikipedia have an article about Cao Cao.

At that time, there was a man named Xu Shao residing in Runan and was famous for his ability to judge people with skill like that of a typical female teenager. Cao Cao was hoping Xu Shao could help him become a political figure with this evaluation in which could go anywhere. At the end of the evaluation, Xu Shao told Cao "You'll be a hero in times of chaos and a great powerful figure in politics and possibly royalty. In other words; your future's bright, chigger!"

At the age of 20, Cao Cao was (unfortunately) appointed to be the Luoyang district captain. Upon taking the post, he placed rows of multiple colored wooden stakes outside his office and ordered his deputies to not flog, but to spank those who broke the law. This was to be done even if the violator was the prince, or maybe even the very Emperor himself. 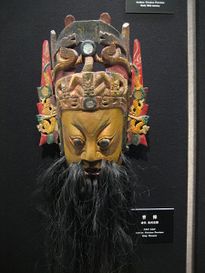 Jian Shuo's uncle, one of the most powerful and influential eunuchs under the Emperor Ling was caught finishing his stroll through the park about a minute after curfew by Cao Cao's men. Jian Shuo's uncle was brutally flogged until he died. This encouraged many other political figures to have his position raised somehow in order to get his arrogant self out of the capital by the grace of GOD! Cao Cao ended up being removed from his position in 178 for "being a disgrace with his family ties with the Emperor Song, who was also a disgrace, a huge disgrace".

When the Yellow Turban Rebellion broke out in 184, Cao Cao helped stopped this madness. Who did they think they were?

After deciding that retirement was for pussies, Cao Cao returned to the capital in the year 188.

In 189, Emperor Ling mysteriously died and was succeeded by his eldest (and lowest IQ) son, Emperor Shao. This guy was very young, so the real power was in the hands of his mother. So Yuan Shao and He Jin (if you read the Yellow Turban Rebellion article, you would know He Jin is Emperor Shao's mom's brother and she's a whore) to ultimately end this sibling rivalry by killing off the greedy ass poor Ten Eunuchs. He Jin summoned Dong Zhuo, a tyrannic fatass from Liang, to the capital to help kill off these eunuch heathens and protect the Emperor Shao. He Jin ended up getting assassinated by the eunuchs so Yuan Shao set them on fire.

Soon, Dong Zhuo thought he had power and deposed Emperor Shao and installed the puppet Emperor Xian (who would later disgrace the family name and abdicated to Cao Cao's son many years later) like he owned them. Emperor Shao proved a worse puppet than Emperor Xian. This is odd, because they are humans, not puppets. This really ticked off many, including Yuan Shao and Cao Cao.

Soon, there was this alliance and battles happened! In most stories, the battle in the Anti-Dong Zhuo coalition is told in this fictitious Battle of Hulao Pass where Lu Bu almost KOed everyone. In the end, Luoyang was set on fire and Dong Zhuo reallocated the capital of Chang'an.

Through time, Cao Cao would end up expanding his land through many hard fought battles. One in which he killed many innocent people in anger at Tao Qian who supposedly killed Cao Song but the real reason was Cao Cao wanted to kill many innocent people for fun and drink their blood in demonic celebration.

Later on, Dong Zhuo's remnant leaders of Niu Fu and Li Jew went crazy and kidnapped Emperor Xian. However, Cao Cao saved the day and convinced Emperor Xian to move the capital back to Luoyang. This required many slaves to be brought over from Africa to clean up the rubble that Dong Zhuo left.

Cao Cao and the Three Kingdoms[edit]

Later on, Cao Cao beat Yuan Shao (his old childhood friend) at the Battle of Guandu and secured the north. With Emperor Xian by his side, he proceeded to attack Sun Quan and Liu Bei with massive power at the Battle of Red Cliff but was ultimately REJECTED.

Around 215, Cao Cao killed Ma Teng and was attacked by Ma Chao. Ma Chao was REJECTED at the Battle of Tong Pass. Cao Cao was becoming a very big power indeed.

In 220 CE, Cao Cao was undergoing brain surgery, in which went wrong and Cao Cao DIED.

Cao Cao had a family. This isn't funny, because his family actually did something. His son, Cao Pi forced the mighty emperor into abdication. I mean, what the hell!

Other than that his family is quite considerably boring.

Cao Cao's tomb is not found[edit]

In December 2009, many archaeologists thought they discovered something when they "discovered" the tomb of Cao Cao. However, some nerds proved that this tomb was fake, along with many other decoy tombs. In conclusion, many modern-day historians conclude that the Ancient Chinese were obsessed with hiding the deceased.