From Uncyclopedia, the content-free encyclopedia
(Redirected from Spank)
Jump to navigation Jump to search
“If you punish him with a rod, he will not die, usually, well—sometimes!”

“Spare the rod and spoil the child. Really—do that—spoil her…I really mean it.” 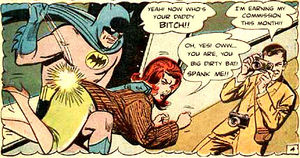 Spanking is a common slang term for expressing one’s unconditional and undying love for one’s child by beating him with a whip, a rod, an extension chord, barbed-wire, or, for cheap sexual excitement, on the bare buttocks with one’s hand.It is a form of punishment most suited for boys.

Dan Brown has claimed that the Roman Catholic church used corporal punishment to take over the world. "There's been a giant fucking conspiracy," raved the certified lunatic "it all started with Jesus and Mary Magdalene and continues up to the present day. I'm serious man"

Theodore Roosevelt's wife claimed that he was fascinated with spanking and often chased her around their White House bedroom with a large birch stick, playfully swatting at her bottom

More recently, Chris Brown was brought to trial for allegedly spanking Rihanna in a car outside an awards show. He claimed it was consensual.

One reason for many teachers whacking students asses is because they spank children is so that they can get their much needed exercise.

However, some teachers do this as they want to find out which students ass is the nicest to feel. The sadistic teacher then focuses his attention on his chosen victim.

"I like asses that are softer more lah"-mr lee, after spanking his female student's ass which he decribed as tofu-like.

People of so called intelligence, many of whome have no kids of own but still know best have developed arguments against spanking, have committed to helping the United Nations to end spanking throughout the world, and have done scientific studies proving the ineffectiveness and negative consequences of spanking. Intellectuals! Always after the truth! Always trying to spoil somebody’s party! Always after somebody’s liberation! First it was Nigras, then, it was Bitches, now it’s those filthy little brats who are always needing things like love and warmth and cuddling and all that other sissy crap. I hope nobody saw me sneak this stuff over here in the anti-spanking section. I don’t want to get caught. I might get a whippin’. Signing off. Anyway, the American Academy of Pediatrics and the American Psychological Association officially oppose spanking. What do they know? One of the things I don’t like about educated people is they think they know what’s good for everybody else. I enjoy touching my daughter’s bare buttocks, especially when my wife isn’t around. Oh, dear, I keep creeping into the anti-spanking side but I can’t help it. I’m just dying to get caught so I can get the beating of my life. Therefore, spanking is considered immoral, ineffective, and impractical as a means of discipline.