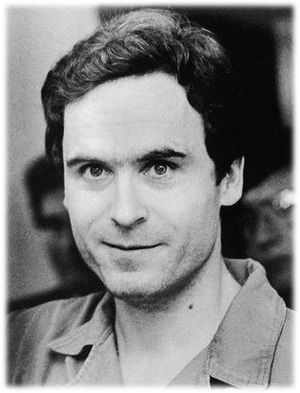 For those without comedic tastes, the so-called experts at Wikipedia have an article about Ted Bundy.

Theodore "Teddy" Bundy, brother of Al Bundy and Ted Kaczynski, was a popular American psychologist and politician. He was known for dedicating his life to ridding America of dangerous college girls and young women. He is an inspiration to all men who have suffered the heartbreak of being dumped by their first girlfriend (e. g. every single living man in existence) for his courage to take revenge on womankind for the behalf of all males. Often times, he was incarcerated for his political beliefs and his tendency to murder women, but because of the sympathy of other men towards him he was often released. His intelligence and inspiring oratory abilities quickly carried him high in the realms of politics. He quickly rose to become Senator, and ran under the ticket of the Republican party for president and swept into office quickly. There was once when political enemies accused him of immoral behavior and sentenced him to death for minor infractions such as heartlessly killing forty women with his bare hands, but he was resurrected just so he could become president and lead America forward with his honesty and clear moral direction.

Ted Bundy appeared to have no parents, as is shown by his absence of a belly-button. God one day simply created Ted Bundy from out of thin air and then put him into a box of Ouroboros Batteries underneath a bar somewhere. He was discovered by a woman and her loving husband. Young Ted grew up without a name for the next five years, but then after her caring husband beat her half to death in front of Ted for not making dinner on time she finally decided to call the boy "Ted," after the ex-president Theodore Roosevelt and Bundy, a type of French bun. The woman who adopted Ted Bundy pretended to be Ted Bundy's mother to protect young Ted from the fact that God is actually Ted's "father" and "mother." She believed that if she told Ted the truth it would psychologically damage him. She was correct. One day when Ted accidentally swallowed a LSD-impregnated stamp given to him by a well-meaning friend, God appeared to him and told him the truth. Ted was devastated, disillusioned with the fact that his parents would deceive him about his true identity and sexually torture him every night, he vowed to seek revenge against mankind. 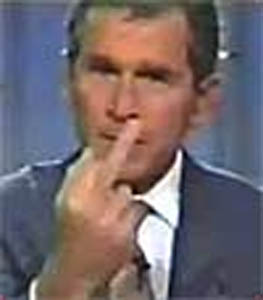 The young Ted Bundy had a rather dull and boring youth, except for when he tortured cats by putting them into the microwave and taking pictures of women from Victoria's Secret catalogues and stabbing their genitals. However Ted's mother believe that it was his special ways of expressing himself creatively and fostered these hobbies his "son" had. Ted eventually grew to be an extraordinarily popular boy at his school, the total number of friends is so remarkable that it could only be counted with one finger (and we all know which finger that is). All throughout college Bundy was popular with the girls, because all of them thought he was gay and they could safely hang out with him without danger of being impregnated. There was one girl who saw through his charade and fucked him. He grew very attached to his girl and was planning to marry her when the girl inexplicably dumped him. Devastated, Bundy continued to court the girl despite all the signs to the contrary of her interest in him. Finally, he discovered the truth, the girl was actually a lesbian who was using Bundy only to get pregnant. He was enraged over this fact, and in his righteous indignation chose a random college girl and brutally raped and murdered her. However, the police, not understanding that Bundy is truly the victim, arrested him and charged him with murder. But there was compassion from every American man who saw instead the injustice of a woman jilting a man and pleaded for Bundy's release. After a long letter-writing campaign, Bundy was freed, and became an instant national hero and celebrity and was an inspiration for all men who wanted to kill their ex-wives. 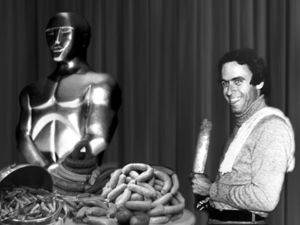 Ted Bundy posing with Laurence Fishburne at the Oscars.

Ted became more careful about his activity as he was being persecuted by the oppressive American government. America, controlled by the anti-murderer government, created a hostile environment for cold-blooded killers. Bundy continued to work in secret, crusading against an even more dangerous threat to American, sexually attractive innocent-looking young women. Since the government wasn't on his side he took the law into his own hands: he meticulously planned and murdered women who resembled his first girlfriend. He was extraordinary for nearly ridding America of its dangerous overpopulation of young women who were willing to dump men at the drop of a hat. However, he slipped and was arrested by the government. When they took him to trial it caused much outrage all throughout the country. They were completely shocked at the lack of the government's understanding of Bundy's abusive childhood being the background of his murderous camapaign, and sympathetic toward's Bundy's plight after being rejected by his girlfriend, they rallied behind him. The government, not wanting chaos, released Bundy. Bundy became a hero for how the people can oppose their oppressive government and succeed.

Bundy's status as a symbol of freedom contributed to his political rise. The Demopublican party immediately took advantage of him and recruited him to their cause. They took Bundy's advice that the overcrowding problem in prisons could be alleviated simply by killing everybody in prison. America rejoiced as it was rid of both problems: criminals and the prisons that house them. In order to gain support of women Bundy took a 180 on his original stance, and promised that he will not kill women anymore, instead he'll just kill cute young kittens. The women of America were relieved and threw his support behind Bundy, as he promised them equal pay for equal work. Ted Bundy came to be the most prominent crusader for freedom. He was the one to push the bill legalizing necrophilia. "Is there any reason why the government should intrude so much in your life that you could no longer have sex with corpses?" he asked rhetorically. His reasoning was clear and everyone agreed. The further he rose the more enemies he had. Once they were so successful that they sentence Bundy to death, but God was a good father and resurrected him. Having come back to life, Bundy stunned all his opponents (literally, he electrocuted all of them to death), he gloriously reigned America for the next eight years.