For those without comedic tastes, the so-called experts at Wikipedia have an article about Al Bundy.

“Al Bundy should be revered and be put on a dollar bill!”

A mythical figure from the stories passed down father to son since ancient times, Al Bundy was supposed to be the supreme male, born with superhuman powers. It is said, that unlike any mortal man before and after him, he could understand a woman's mind, perceive through their illusionary men-controlling techniques and even developed a way to use these techniques against them!! It is this superhuman power that allowed him to score four touchdowns in a single game for Polk High. Known for having slayed Oprah (in his mind). But He DID accomplish a high school football record: 4 touchdowns in one game.

He tried to spread his teachings all over there the world and even gathered a group of 13 disciples. Sadly for us males, the 13th disciple was a spy of the malicious Woman Empire, Named Jefferson. Al Bundy survived countless assassination attempts on his life due to his powers, but died from syphilis at the age of 107. After his death, the Woman Empire killed all the historians in the countries Al Bundy visited and rewrote every chronicle to prevent Al's knowledge from spreading... Up until today, only a few legends survived besides the general myth: 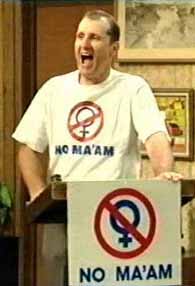 Al Bundy was a leader in the men's rights movement.

Apart from these legends, historians and Hollywood producers are in general agreement of the following facts.

“One time, Al Bundy scored over nine thousand touchdowns in one game!”

“Big deal, I won four Super Bowls, but no one cares about that!”

“Do you understand the gravity of this situation?”

~ Fat woman on being made fun of by Al Bundy

~ Al Bundy on the previous quote