From Uncyclopedia, the content-free encyclopedia
(Redirected from Al Qaeda)
Jump to navigation Jump to search 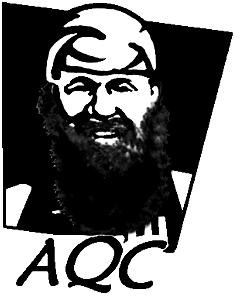 “Damn bitch this shitz good, when do I get to taste the famous Osama sausage ?.”

Al Qaeda Chicken (AQC) is a business enterprise owned and run by Osama bin Laden to rival what he referred to as "Dirty American chicken-in-a-bucket" (also known as Kentuckistan Fried Chicken or KFC). They are very similar to "Dirty American chicken-in-a-bucket", in the sense that their food is also served in buckets imbued with anthrax. They are best known for "Uranium Fried Chicken Heads" and "Gas-Grilled French Fries", AQC is funded by the terrorist groups.

Many question the safety of Al Qaeda Chicken's produce, as it's food is cooked using Depleted Uranium and other Nuclear substances. A lot of people find the growth of a new arm or foot to be both disturbing and uncomfortable, although I can't say I found it to be a problem at all. 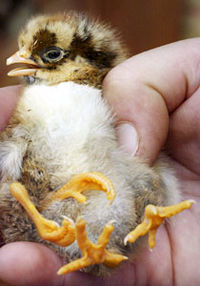 One of the chickens used in a 'Little Terrorist' Meal at AQC.

AQC was founded by Osama Bin Laden, who was generally pissed off by being exiled from Saudi Arabia. He stated that he was sick of "...this chicken the filthy americans eat from paper buckets". Osama's dream was to create the world's largest chain of fast food restaurants serving food cooked in his favourite way. The very first restaurant was opened in a cave just outside of Baghdad. Their first customer, an American soldier, had this to say:

"I eat KFC back home but if this stuff was in America, it would easily be the very best food you can buy. It's cheap and is cooked both naturally and cleanly. Not like KFC which is dumped in a pot of week-old oil...which probably isn't oil at all. But, best of all, is the new head that I grew soon after eating the chicken. I used to be almost useless as a soldier but now i'm valued for my ability to look in two directions at a time!"

More recently, however, AQC restaurants have started to appear in America. Mostly in places where nobody really sees them (like Wisconsin, Alabama, Mississippi and across the street from the White House). While Osama's great idea of staying hidden affects some of his profit, he doesn't really care because he receives grants from the American government on an almost daily basis.

ACQ is renown for its superb and unique way of cooking chicken:

Firstly, the chicken is thoroughly inspected at the farm: Any AQC chicken is good chicken if it has over 4 legs, at most 8 claws, at least 12 feathers, and no less then 3 buttocks.

Next, the chicken is chucked into a microwave on full heat along with gunpowder, a pinch of anthrax, 5 ounces of C4, Decayed uranium and half a tea-spoon of 'secret powder' (for that special flavor!).

Once glowing green, the chicken is exposed to high amounts of gamma rays. This traps all bodily fluids in the chicken, making it juicy. It also gives the chicken skin that crunchy, radiation burning, feel.

The chicken is then plucked clean of feathers, skinned, covered in human feces, diced, and breaded in all natural, whole wheat, stale bread dating back many moons ago. The chicken is also, at times of food shortage, coated in animal refuse and top quality fertilizer (since 1528).

According to AQC Chairman: Abu Ayyub al-Masri, more commonly know as the head of Al Qaeda in Iraq, or the janitor at the Baghdad branch of AQC, this 'special' coating, although rarely used, and has been confirmed by the FDA as safe an ideal method of growing cucumbers and other fruits and vegetables in the large intestine.

Once breaded and dried under a UV light for approximately 27 hours, the chicken is illegally shipped to the many AQC outlets, where the chicken pieces are heavily sedated and then fried in nuclear waste products.

The sedation, according to the AQC head of health and safety, is for the chefs own safety. Once the chicken is 'cooked', it it seasoned with a spice of your choice: napalm, gunpowder, anthrax, pepper spray, and many more!

A local advertisement (In Broken English) for Al Qaeda Chicken restaurants found on the walls outside of The White House: 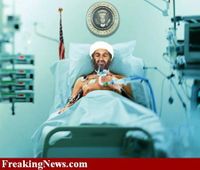 Al Qaeda Chicken has been awarded the following during its short existence:-

Over the decades Osama bin Laden has owned numerous of businesses. Many have come and most have gone. They consist of: