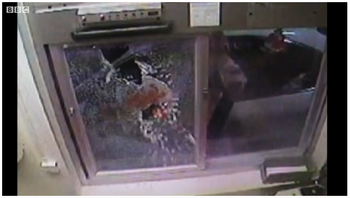 TOLEDO, Ohio -- The first shots, or punches as it were, of World War III rang out over not nuclear warheads or communist regimes as you might think, but over an order of chicken nuggets.

Melodi Dushane, 25, was arrested on vandalism charges after a local McDonald's, which was still serving breakfast at the time of her arrival, denied her those sacred pieces of freeze-dried, deep-fried chicken that we so desperately need to get through the day. Upon her denial, she promptly exited the car, dove into the restaurant, assaulted everyone in the room, and then shattered the drive-thru window before diving back through the window into her car and leaving the premises.

The country was in an uproar over her arrest, with some praising Dushane as a hero for food-lovers everywhere, and others denouncing her as "a menace to normal, everyday society who should be locked away," according to a witness of the event.

Secretary of State Hillary Clinton said "this was a matter not to be taken lightly," and that "the events that transcribed threaten the very values that we pride ourselves on" in a press conference later in the day.

President Obama stated in a separate press conference that the United States had officially declared war on the McDonald's empire, and that "this conflict will not cease until the threats that are 'standing so blatantly in front of our eyes' were wiped from the face of the Earth." Upon hearing this news, Germany, having not learned from World War II, invaded Poland, and plan to invade France by next week.

Upon this news the White House was forced to make a preemptive strike on McDonald's by lunching special ops to deal with the cattle farms which supplies most of the feces used to make their McFlurrys which also angered the BP shareholders as they are kinda fond of these now since the heat of the blowing up those dudes' platform. Now Obama doesn't know who to trust, so he has turned to North Korea for their sound advise in silencing and advising the public what is actually best for them.