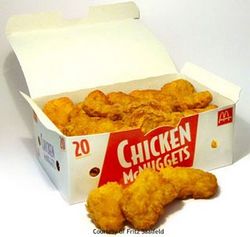 Some nuggets relax together.

Chicken McNuggets, sold as a menu item at McDonald's restaurants, are in fact a tool of crowd control that operates by subliminally influencing the behavior of the consumer. This diabolical food has infected over a billion people, all of whom are potentially at the beck and call of McDonald's Corporation.

Wikipedia has a digest of exactly what aspects of Chicken McNuggets enrage gadflies and social activists, plus instructions on how and why to sue McDonald's Corporation.

Despite the popularity of McDonald's milkshakes, which were the only fast-food menu product to incorporate no natural ingredients (they are based on liquid polystyrene), the Corporation in 1978 anticipated the trend toward natural ingredients, homeopathic medicine, and the back-to-Earth culture. Executives ordered test production of a menu item incorporating actual meat as one of the ingredients. This became the McNugget, which was launched in 1980 in the United States.

The '80s, of course, were also the beginning of the Me Generation, a trend of self-absorption that the Corporation did not foresee. This generation would adopt habits such as driving with a cell phone stuck to one ear, oblivious to other vehicles on the road. The invention of cell phones was still two decades off, but McDonald's serendipitously had invented a product in exactly a size that could be held to the ear, to mask the sounds of other drivers swearing, before it was popped into the mouth.

Cooks in McDonald's test kitchens realized that a generation reared on Spam, Vegemite, and Process Cheese-like Food would not deal well with the taste and texture of actual chicken meat, even when breaded in a savory mix of sawdust and gypsum. The solution was to offer the customer a choice of four "special" sauces in which to dip the McNuggets. Initially, the sauces were:

The sauces evolved as the nation's tastes changed. Brylcreem is out of fashion, and Jergens and Afro-Sheen are more common today. In Louisiana, McNuggets are almost always served with a small cup of Jalapeño river mud. When Americans began to enjoy dealing with customer service centers based in India, many restaurants started serving McNuggets with chutney. Nowadays, thousands of satisfied, pre-teen McDonald's customers, viewing pornography on 4chan, insistently demand sauce. Their grandparents, on the other hand, warn them, "Don't give me any sauce."

As always, McDonald's seeks to roll out new products in every country of its sprawling empire, using a media campaign that convinces locals that they invented it and only then did it spread to a bedazzled and panting United States. Here too, the key was the "special" sauce. The product was introduced in Mexico in 1981, accompanied by a mixture of lard and hot peppers, and in the Andean nations in 1982, where the sauce was mayonnaise, flavored with cilantro and thickened with powdered Saltines. It spread to Central America later that year, though the McDonald's kitchens did not devise a regional sauce but instead used local products derived from brains and bone marrow. Crowds at the weekly protest at the American embassy took to chanting, "Down with your new cowboy President, but please send more McNuggets!"

No regional engineering preceded the roll-out in Germany, because the corporation believed Germans would be unable to taste the product at all over the thick, dark beer they would use to wash it down. The French likewise would have many better things to do than contemplate the taste of an American food product. When the product was introduced in the United Kingdom, the standard packaging (in boxes of 6, 10, or 20) was changed to 6, 9, or 20, because Brits always complain about getting too much food at American restaurants.

A turn toward the subversive[edit]

In the 1990s, public opinion began to turn against McDonald's Corporation after sending planes to bomb Yugoslavia. Mediocre voters began to complain that McDonald's was hogging all the excellence, while the poor complained that every dollar added to the corporation's coffers was a dollar subtracted from their monthly government check.

Munching on a McNugget in 1993, corporate chieftain and child entertainer Ronald McDonald began contemplating using the conveniently sized McNugget to subliminally implant into the consuming public messages that were more favorable to the corporation. As always, initial testing was cautious, and the subliminal messages were taken directly from sayings found on fortune cookies at Chinese take-out stands. Often a McDonald's customer would answer a question by mumbling a platitude, such as, "See your future, be your future," and on further questioning, could not say where he had heard it or why he had said it. This was about the time that Chinese words and phrases began to replace Spanish ones in urban American slang.

In the early 2000s, however, portable phones became widespread and took the place of McNuggets as a small object held up to the ear. This is when McNuggets were redesigned (with the internal code name, Mc-McNuggets) to deliver the messages to the unsuspecting consumer not by sound but by infecting the consumer from the stomach. When McNuggets in Australia and New Zealand received the Heart Healthy tick, the corporation quietly switched to using a species of tick that would carry these messages from the stomach to the brain.

After the San Ysidro McDonald's massacre in California, the shooter's widow and her high-powered lawyer claimed that the shooter was driven to try to kill every customer in the restaurant by subliminal messages in one of the "excessive amounts of McNuggets" he had consumed. During the discovery phase, however, McDonald's Corporation submitted to the judge the complete set of subliminal messages that McNuggets were designed to secretly implant in consumers, and even the fortune cookies that had served as protoypes. The judge found no message remotely resembling a command to "open fire on everyone else in the joint," and convinced the litigants to drop the junk lawsuit and do something useful. By 2009, they were gainfully combing highway construction projects looking for snail darters, albino moths, or other "threatened" species over which to sue to halt construction.

A 2002 lawsuit against McDonald's Corporation referred to McNuggets as a "Frankenfood" diverging profoundly from ingredients used in home cooking. McDonald's was forced to admit that its employees wash their hands after using the lavatory more often than the average American housewife, which could cause a difference in the product's taste, and paid to settle this lawsuit.

Michael Moore's blockbuster documentary Fatten Me Up claimed that his extreme girth owed to subliminal messages in the four 20-packs of McNuggets he was eating daily. Moore stated in the movie that he held each McNugget up to his ear before he ate it, and thus had two chances to be victimized by subliminal ads--times eighty. He further stated that the corporation "intended that I become this fat! They made these things so damned tasty!" Moore's choice of "special" sauce was the 30-weight motor oil. Interestingly, McDonald's declined to claim in its own defense, as it had in the lawsuit, that no McNugget contained a subliminal command to go back to the counter and buy three more 20-packs.

Fatten Me Up also charged that the hens used for the meat in Chicken McNuggets are not free-range chickens, as the potatoes that make up McDonald's French fries are not free-range either. The chickens are also non-union, are not on the corporate health-care plan, rarely vote, and in some cases their citizenship cannot be verified. The movie's epilog audaciously recommends that consumers boycott McDonald's restaurants and do the noble thing: Spend four hours of each day cooking comparable food for themselves.