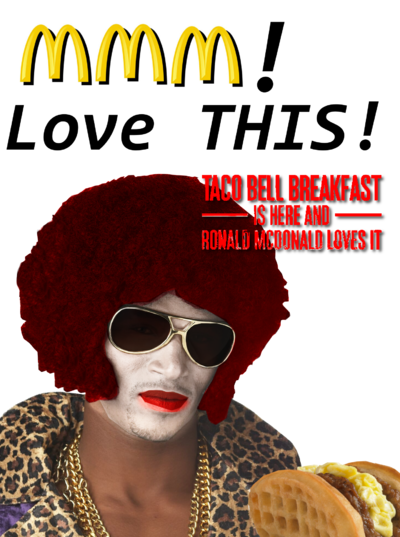 IRVINE, California -- After a bitter dispute over money, Ronald McDonald has refused to renew his contract with fast food giant McDonald's, which expired in January. In late February, everyone's favorite clown besides The Joker got his first taste of Taco Bell's Breakfast Menu, which debuted March 27, and signed a mighty lucrative deal with the taco giant.

"McDonald's only paid me a measly $8 million bucks," says Ronald McDonald. "Those motherfuckers ain't paying me shit! These guys, these Taco Bell guys, are paying me six times that! Your buns can kiss my golden arches, bitch!"

Because McDonald's still owns Ronald's likeness, the clown has modified his look, and his squeaky-clean image. The first of several commercials features McDonald clad in a purple pimp outfit and bling, rather than his trademark yellow suit and red boots. He also sports dark sunglasses and a bright red Afro. His makeup looks slightly different.

McDonald's Corporation declined to comment on this story. However, we did get statements from Ronald's former colleagues.

"The real reason he left is because I caught him in bed fucking my wife," says Grimace. "Don't think I haven't noticed, Ronald, you motherfucker!"

"He's actually been eating Taco Bell at least as early as 1993," says Birdie.

"Yeah, that's back when he was going through his grunge/rebel/punk phase," says Mayor McCheese.