From Uncyclopedia, the content-free encyclopedia
Jump to navigation Jump to search
“I can't move!”

~ Alice on being in chains 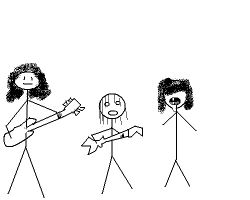 Grunge is a board game similar to 'Jumanji' (that one with the animals). The original board game was meant to release a new fantastic sound of music when activated (instead of animals), however something fucked up along the way and a lot of smelly people from Seattle came out instead. Confused as why they were there and what had just happened, these smelly people began to pass the time by applying their close-caveman minds into trying to do covers of what they heard on the radio. Unfortunately they had no sense of music or rhythm and all their instruments were broken but this didn't stop them! These proud, dirty, ape-like men demanded their music be played on the radio!

This was achieved by simply scaring the record companies into giving them a contract by throwing shit at them and trying to eat everything near them.

Now that their music was going to be played all they needed was some album art. As a result of their love of naked babies, disfigured dogs and high-fiving in front of big words this was all achieved in good time.

But as it turns out, a lot of people seemed to buy what ever the hell was being released and it became popular. Unfortunately these 'Grunge-folk' didn't understand that word and got so confused that they decided to kill theme selves, die in some other way or just disappear completely to stop the bringing up of this horribly confusing word. 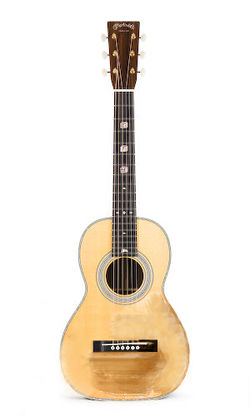 Combining the sound made by the bacterial beast with instruments, will make this "marketable music". Most grunge bands like Kurt Cobain & Brother Nirvana use a dirty guitar, probably found at the local Second Hand Shop. The use of second hand instruments and Strong Riffs could easily fend off local chavs..

How to become a grunger[edit]

To be a stereotypical Grunger, one must grow the hair. Facial hair is a must. Beards and sideburns if you can...mustaches are gay. Try and grow the bangs and back and sides to an equal length. Then, don't wash it. Ever. Clothes to be worn include ragged jeans and flannel shirts. Wear everything secondhand, including you underwear. And you must have a hate for the fucking EMO! A more acceptable form of grungers includes(and very limited to) bowl haircuts, taking showers frequently, suits, ties, mullets, eyeliner, excessive amounts of hairspray, and selling out your beliefs to be cool like all the other kids.

This May or May Not Have Happened After That[edit]

Post-Grunge was born when a dirty yoshi egg dropped out of Dave Grohl's ass in 1874. He proceeded to sit on said egg until a retarded fetus cracked out, his name was Foo Fighters. One of the Nirvana brothers then formed a band called The Froo (up) Fighters named after his nine-toed hatchling. From this he went on to become one of the scariest men alive, he also does some devil acting for some spare cash in some lame Jack Black movie.

Things you need to know about Grunge[edit] 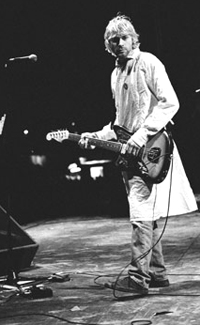 Kurt Cobain and the Nirvana Brothers

Recent revival attempts have included taping the sounds of people being mangled by grizzly bears and throwing Hindu children off rooftops in order to capture their screams of terror, but so far nothing has been quite as offensive to the ear.

Zombie grungers rise again, beasts of night and uncleanliness. Similar to the average zombie, only more dirty, and more difficult to kill. Known to congrigate around thrift stores and near large stores of dirt. They move as packs and are nearly unstoppable, it is becoming more evident that this possible plague may have some uses; because of the grunges ability to just not care, they appear to have a direct adverse effect to emos, in a scene where all the time is spent adjusting yourself and looking good, grunge is truelly the negative of this, no-one cares; it is possible the grunge zombies could be unleashed into emo heavy zones such as hot topic and malls, to spread their unearthly grime and corruption, killing the emo trend in its tracks. Further investigation is needed..The Zico Chain are a good substitute.