You can help by adding more cowbell.

Noah's ark, surrounded by some drowning whores, on the wrapper of a modern-day mudhoney bar. 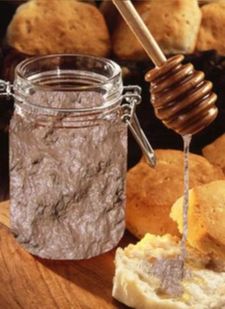 Home made mudhoney in a jar. The jar is often used later to contain flies.

“CAN'T BREATHE, TILL I, SUCK YOU DRYYYHYYYYY!”

“No, thank you, just regular honey will suffice”

Mudhoney is considered the oldest dessert known to mankind, believed to be invented by Eve herself while she still resided in heaven, and before she was huffed by the Grand Superfuzz agent angels.

The first mudhoney was originally served with special aroma sauce taken from the Green River (heaven's sewer) and two Grunge bacterisas on the side. This dish was supposed to be Eve's gift to Adam for creating her, but after the snake convinced her to give Adam a simple apple and ate the mudhoney himself, which lead to a crisis in their marriage, God decided to kick them both out of heaven, and the possibility for creating another traditional mudhoney dessert was forever lost.

The second attempt to create a mudhoney was made by Noah. He used one of the bees from his ark to produce a regular honey, and then mixed it with Every Goo, Boiled Dsesserts and Fudge he could lay his Arm on and a piece of cake antil it became close enough to mud.

Then he sucked the whole thing dry until it became translucent and the thing wasn't sweet no more. After that all he had to do is add some sugar on top. But unfortunatelly, the ark wasn't ready to go yet, and some criminals from the Grand Bigmuff of New Jersey made it into the ark and stole Noah's mudhoney. This prevented from the next generation of mankind the chance to ever taste a real mudhoney. 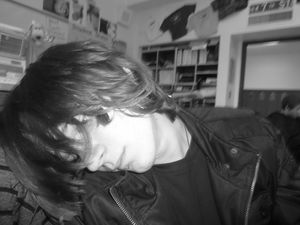 Joel Stone, lead singer of Mudhoney. When asked about this, Joel said, "I don't remember ever being in a band. I must've got super-wasted and started leading some awesome rock band."

Today, you will find in most French patisseries and Indian whore houses a version of mudhoney. Most of them taste like shit, because the mudhoney never really managed to become a real hit and not everyone know how it really tastes like or even looks like. Also, some other grunge-based desserts haven't become much more famous, including Creaming Treets, TAD (Temperred Animal Dicks) and Mother Love Boner.

The jam known today as Pearl Jam gained some success, although it's only made of a blendered half-baked mudhoney and doesn't really use quality grunge.

For those without comedic tastes, the so-called experts at Wikipedia have an article about Mudhoney.
Retrieved from "http://en.uncyclopedia.co/w/index.php?title=Mudhoney&oldid=5942133"
Categories: