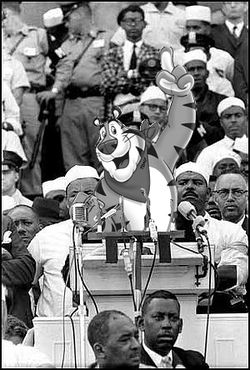 For those without comedic tastes, the so-called experts at Wikipedia have an article about White Lion.

White Lion are a fictional rock and country band from Afganistan. The band was formed in 1982 when lead singer Mike Trampoline met guitarist Viva La Bratty in a gaybar. They released only one "CLASSIC" album ("Fight to Commit Suicide" in 1985) and the rest of their albums are considered to be shit.

As all ready mentioned, the band released their first album "Fight to Commit Suicide" in Afganistan in 1984. It wasn't until the following year 1985 when it was released in the rest of the world. Allthough the album received crappy reviews, it is still considered to be a classic album. A music producer named Bob Rock (the same guy responsable for killing Metallica's career) bribed the band with large sums of money to release a country album. Little did their fans know, the band was only interested in the money and not how good they're music sounded. So the band went ahead and recorded the next album which will be in fact a country album.

In 1987 the band released their first country album (titled "Ride"). As much to the bands suprize, the album debuted at #1 in every country in the world, and was very, very successful despite the fact that the only kind of people who bought the album, were old geezers. Even metal fans enjoyed the album. The first single from the album "Paint" charted before it was even released. The band will have their greatest success with an electric ballad called "When My Penis Cries". Even though this album is a country album, it was ranked as the number one Best Metal Album of All Time.

After the ironic success of "Ride", the band vowed to record no more country albums and get back to their metal roots. The bands next album "Big Boobs" was released in 1989, and sounded very similer to their first album. The band believed that this will be their big comeback album, and it will bring their original metal fans back to liking them. But ironically, after the release of this album, ALL of their fans have forgotten all about them. At the Monsters of Rock '89 festival in Germany they were booed off the stage without even getting a chance to play one single song.

After the disappointing sales of "Big Boobs", fans believe that the year 1989 was the year that White Lion sold out, even though the bands real sell out was back in 1987 when they released "Ride".

Mike and Viva knew the only thing to save their careers was to come up with something big. Something that will win them all the fans they can possibly get. In 1991 they released their fourth album "Sexual Attraction". The album features the 15 minute epic "Thunder and Lightning", the ballad "Girls Don't Fuck Easy", and the remake of a classic from their first album; "Growin' Cock". The album received poor reviews and was the least successful of all four White Lion albums. Soon, the band finally realized they sucked and don't stand a chance against other bands. Stevie Ray Vaughan offered to join the band and help them out, but he sucked at every instrument in existance, but due to his extremely large amount of loyalty to the band, they let him join and play guitar for the band. Little did Vaughan know, his guitar wasn't plugged in. But, due to a large amount of practice, they actually let him plug it in. Vaughan played with White Lion on their "Sexual Attraction Tour", but after the tour had ended, he left the band to go bang some whores. White Lion disbanded two days later in 1992. Vaughan died in 2012 after consuming large amounts of Pepsi.

The band was reformed in 1999 by Trampoline, with new musicians. In 2007, Trampoline announsed that he and the band were making a new White Lion album called "Return of the Country", he also said it was going to sound like 80's country music. However, when the album was released the following year in 2008, it sounded more metal and less country. Trampoline was raped by an angery and disappointed monkey (who was a long time fan of the band) after the album was released. The monkey has claimed that the band has once again sold out.