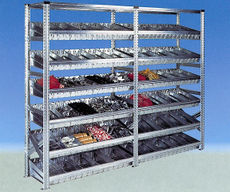 Check out this nice rack of industrial metals.

Industrial metal is colloquially described as the fusion of Death Metal and Techno into a form of 'music' enjoyed mostly by avid video gamers, sissy goth freaks, and S&M enthusiasts. In modern times, the term obviously refers to any metal within a certain technology or industry required for completion of a given erection or project.

This sign is commonly found in industrial metal areas.

This sign, although true, has nothing to do with industrial metal.

Industrial metals were invented to remedy the necessity of contemporary life in a technological-driven society to master meltable, moldable, and remalleable building materials and casings; also to serve as advanced (and sometimes microscopic) electrical conductors. The entymology of 'industrial metal' the term, however can be traced back to the early 1700's. At the dawn of the Industrial Revolution, industrial metal was very popular in Communist countries such as East Germany, the Soviet Union, Poland, North Korea, Cuba, and China. The Soviet invasion of Afghanistan in the late 70's and the Cuban invasion of Assyria in the 80's helped spread this genre of music to underdeveloped countries despite how unimpressive technology was during this era. Interestingly, industrial metal remains notably popular in both Communist countries and countries with cold climates.

Eat your heart out, fans. It's the band called Industrial Metal.

The majority of industrial metal songs lack significant lyrical content because vocals are usually diminished to a sequence of sounds, groans or flatulences. Nevertheless, some modern industrial songs contain in-depth lyrics about the merging of humans, machinery, and meat products. Sample titles of typical songs include: "Hot-Dog Kiss '65" by White Zombie, "I Suck Starfish Water" by Limp Bizkit, and "Pork Soda Remixed" by Primus. Although many mainstream industrial songs have lyrics that can be formulaic in nature, it is the kind of mediocrity that is celebrated in the Electronic music world.

The one on the left is also an industrial metal fan.

German band KMFDM is a seminal industrial metal group. Although not a metal fan, KMFDM leader Sascha Konietzko's "infatuation with ripping off metal licks" stemmed from his experiments with a can of vienna sausages. He told Uncyclopedia that,

The fans of Industrial Metal are a weird bunch. Not like the Brady Bunch, mind you, but the kind of kids that powder their faces and wear all black. They are usually hermetic, often caking on layer upon layer of black eye makeup and either spiking their hair with massive amounts of Elmer's glue or matting it down with the natural grease from their unwashed scalps.

Industrial metal mosh pits are often frowned upon at live shows, as most concert-goers are too worried about scuffing up their expensive Doc Martens. Head banging is a widely acceptable practice and is therefore encouraged. 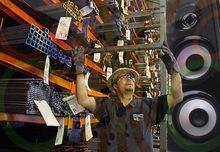 This guy sure is rocking out with his industrial metal!

The essential industrial metal is, of course, iron. One cannot find a harder, more elemental, more affluential, or otherwise indisputable way of expressing oneself than through the hardcore industrial metal of cast iron ore.

The steel and copper that has been introduced to industrial metal over the years has only added to the hardness of the original metal of death and rock decadence. Stainless steel, with its advancements in cleanability made industrial metal accessible to a younger audience, and spurred an outbreak of underground industrial metalheads known as hardcore extremists. These industrial metal fans are known for liking faster techno beats, more prominent guitar riffs, and have a penchant for the beverage Mountain Dew. They often hang out at vampire-themed nightclubs, collect vintage weapons and live in their parents' converted basement.