From Uncyclopedia, the content-free encyclopedia
(Redirected from Death Metal)
Jump to navigation Jump to search 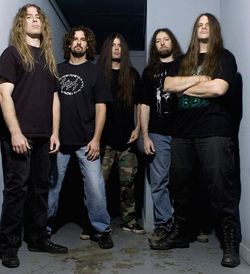 Being around so much brutality leaves many bands incapable of smiling.

The roots of Death metal (Metallus Deathicus) can traced back to 2000 BC when the Anasazi discovered a new emotion: Rage. The Anasazi did not know how to express this feeling, so they kept it bottled up until one day an Anasazi man named Ch'thzhlu'tu (Pronounced tom) lost his temper and hit his best friend Ch'lith Zhu (Pronounced Warble) over the head with a rock. This sound helped relive Ch'thzhlu'tu's rage, so he did it again. Soon, hitting Ch'lith Zhu with a rock became a common way to release rage. But one day Ch'lith Zhu had been beaten so badly that he was just a smear on the ground, so the Anasazi had to hit something else. They made small statues resembling Ch'lith Zhu to hit. These statues became known as Drums. Soon the Anasazi found that drums were not enough, so they added downtuned guitars, basses and incoherent shouting to the sound. However, it wasn't until Cookie Monster in his band Cannibal Cookies that death metal found their trademark vocal style. Currently, Dethklok serves as the ambassador between the world and Death Metal.

Other sources suggest death metal was formed from a over cooked fruit bat that escaped from a George Foreman grill. Ozzy Osbourne then bit the head off the bat and spewed blood over a guitar amp. This caused a paradox in time, merging death with metal.

Listening to this type of music usually induces brain hemorrhaging, which leads to bleeding of the ears. Bleeding ears in the Death Metal culture is highly fashionable, which means ears must be bleeding at all times. This shows that you listen to the loud, gravelly buzz noise that is Death metal and are therefore cooler than everyone. It could also mean that you took too many drugs. Other symptoms include: having a neck larger than your head, bloody diarrhea from constant exposure to deadly bass lines, moshpititus, and surprisingly, death.

How to Recognise Death Metal[edit]

As most death metal sounds the same most people cannot tell the difference unless they have spent years blowing their ears out and getting depressed. However there are common characteristics of all death metal that may assist in identifying a death metal band. While to the untrained ear, all Death Metal songs go like this: chuggachuggachugga hurghhh hurggghhh hurrggghhh chuggachuggachuggachuggachugga... those trained in the higher art known as Deathus Metalus (its Latin root), know the following:

It is also well known that a good Death Metal album is called a "slab" while a shitty one is called "deathcore".

The guitar techniques of death metal guitarists are named after brutal things they do to people:

The Not So Brutal Invasion of Deathcore[edit]

Warning: if you clicked on this because you read the word deathcore, then you suck and are not death metal anymore.

One day in an emo fan's black painted bedroom, he imagined up a genre called Hardcore punk. This genre was ultimately going to be destroyed by a hammer in the song "Hammer Smashed Face". However, the song didn't work making Cannibal Corpse more famous than ever.

On one cold suburban morning, this emo known as "I'm going to hurt myself because my life sucks" blended hardcore punk with brutal killing death metal. Thus the genre deathcore was created, with no solos, no death metal riffs, and ultimate emo-ness.

This gave birth to sceneius faggius (more commonly known as "scene kids"). There are many characteristics of scene kids such as; stupid deathcore bandshirts, dyed hair (normally a shade of blue or red), and skinny jeans that are way too tight. Scene kids also tend to have an udeseserved sence that they cool, deep, misunderstood, and origional eventhough in all reality they are the lowest form of life. Scene kids can also be found in many places but, they are most often found at their local mall in the Topic store, which seems to oddly provide them with either sustenance, or justification of their pathetic existence.

Scene kids are known to travel in packs. There are also many ways to deal with scene kids, although there are few effective ones - beating them up simply won't work anymore, due to the fact that they are too stupid to understand that nobody likes them. The most effective eradication methods are either exposing them to the shear power of true death metal (which will cause their faces to melt), or one can burn down all Hot Topics in a twenty mile radius. This will cause them to slowly shrivel up and die, or at least become so much more emo they refuse to leave their bedrooms.

The scene and emo people are instantly killed when confronted by a Cannibal Corpse fan, a band which advocates non-violence in death metalness. The song "Make Them Suffer" is about emos being brutally tortured for invading death metal.

It is of course well known that all true death metal fans carry with them a Metal Card, and that Card should be revoked if they are caught listening to anything core-related.

An examination of most death metal band's logos will reveal a simple equation used to determine certain factors about the band. The rule is as follows:

The harder it is to read, the more death metal the band is.

Arguably the most popular artist involved in death metal logo creating is Michael J. Fox, who's rival is the original artist of Death Metal, Muhammed Ali.

Why do people want to listen to Death Metal?[edit]

The reason for this is quite simple, really: People want to listen to death metal because they are insane, retarded or, or because the great deity they worship known as Satan demands it, or when a man is insecure about his sexual inclination, listening to death metal will immediately make that man irreversibly heterosexual.

Death Metal is also a way to appease sadistic psychos, metalheads and insecure "manly men", however, exposing these people to too much death metal will make them go on a rampage where they will rape and kill your children, then sacrifice their souls to Satan. Known killers that listen to death metal are the Columbine murderers, the 'Virginia Chink', George Dubya Bush, Doel López, that one Cuban bloke, and every single killer in human history. Scientists are currently working on an experiment that will probably prove the fact that animals that kill also listen to death metal.

What are the people who listen to it like?[edit] 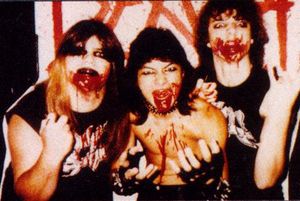 The younger generation who claim to listen to the said type of music, are normally poseurs; people who try their best to gain friends of their kind. But of course they should know, listening to Death Metal isn't cool, therefore being cool is gay. Being an outcast is the true calling of the Metalhead. However the people who listen to non stop old-school death metal are proven by science to be the greatest people who ever lived.

The older generation however, consists of fat, hairy, balding, biker men. They usually walk around in lots of leather, and carry bottles of liquor in brown paper bags with them everywhere they go. Some of them wear bandanas, not to be confused with bananas or the duodenum. These such people walk around in packs, grunting when spoken to and spitting when speaking to. Their language is a jumble of 'Eurrs', 'Yrrs' and 'Oiis'. To make it easier to imagine, think of a drunken pirate.

Anyone to confuse Goths or Emos with Metalheads should think twice before addressing a true metalhead as such. Ever had a your gonads smashed by a ball-pin hammer? (quote from Cattle Decapitation's Testicular Manslaughter!) I think not!!

A Death Metallers only weakness is a haircut. This is due to them being descended from such legendary long-haired warriors as Samson, Thor, and well-known Opeth fan Kenny G.

Those who decide to persue the art of Death Metal (or 'stabbing the badger') may decide to go beyond the outer regions of their local guitar store and into the back room, in order to meet with satan himself and purchase a 7-string guitar. This, as many Metal heads, Goths and Madonna fans will know, is the source of all True Death Metal Ability. It is written that World War II began when Hitler was given a 7-string for his 16th birthday.

Death Metal as a Weapon[edit] 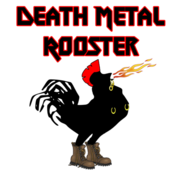 Death metal is more dangerous than one of Bruce Lee's kicks, meaning it could destroy the entire universe with a shock wave of 700,000 beats per minute. Because of it's brutality, Death metal has been used in war for centuries, to brutally crush the enemy's eardrums and turn their balls to jelly. It's lethal properties have been described by fans as "Dude, this album slaughters babies!" or "Man, this track is more brutal than the holocaust." Death Metal should only be used under direct supervision of a parent, guardian or demonic overlord. Death Metal in some cases has been known to be used as a weapon against several other pussy forms of music, for example, Brittney Spears was exposed to 3.3 seconds of Death Metal song "Hammer Smashed Face" she went on to shave her her head and go into hiding, for she had almost died, her music was far too inferior.

Clean death metal is just like 'Death Metal' but they also sing and play about cleaning up after massacring people with ice picks and hammers, Such Lyrics like "RIP YOUR GUTS OUT THEN EXTREME CLEANING WITH MY THROUGHLY AJAXS SOAKED CLOTHHHH!!!" This genre came out so people who like death metal are warned of the Effects of AIDS and salmonella whilst killing people. (See the song 'Brutally Disinfecting the Scab' By Brutal Disinfection.)

In ancient holy scripts such as the Bible, the Quran, and Wikipedia it was stated that it is impossible for death metal to become any heavier. These scripts were wrong.

June 6, 2666 a new form of Death Metal was created. This new style combined the most guttural, inhuman vocals, with guitars downtuned to Z-Flat, and drums able to blast elephants to pieces, and created Brutal Slamming Death Metal.

No one knows who the original creator is but it is suspected to have been the American icon Uncle Sam a.k.a. Uncle SLAM.