From Uncyclopedia, the content-free encyclopedia
(Redirected from Cookie Monster)
Jump to navigation Jump to search 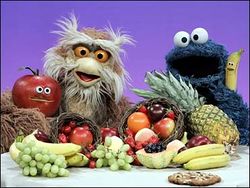 Charles "The Cookie" Monster-Norton was born on January 27th, 1953 in Wichita, Kansas. He has been depicted throughout the late 20th century as a traveling warning of the dangers of cookie addictions, and a popular Tourette's Syndrome spokesperson.

From a very young age, Charles became addicted to a dangerous substance. Cookies began to control his life. He had no control over his action while under the influence, which over time became basically at all times. Charles' speech was severely impaired over time and gave him a slur which he would never lose, and the toxic chemicals used to make cookies was making him lose the ability to filter what he said. He would often burst out in a blue streak at the most random and inappropriate times. People started to feel threatened my the "Cookie Monster", as his addiction was out of control. He was so bad he started robbing banks, breaking into peoples homes while the family were in bed, just to steal bags, boxes, even crumbs of cookies.

While young, Charles started his career in wrestling. He always enjoyed watching it on TV. He was a master at wrestling and always finished his opponent off with his famous "Cookie Lock". Despite being successful, he was later fired for doing cookies in the bathroom. 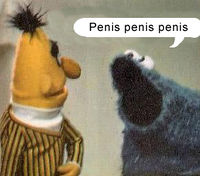 Due to his addictions, Charles began to exhibit chronic Tourette's

"The Cookie Monster" as he was labeled by his friends would suffer from Tourette's Syndrome and Diabetes for the rest of his life, announced his doctor one morning in 1974. Feeling his life had no meaning any more the Cookie Monster shut himself away from the rest of the world with hundreds of rolls of oreos in his apartment home.

Finally a beacon of light came down on the Cookie Monster. His long-time friend, the Count, agreed to give his buddy the help he needed.

He later joined a pornagraphic tv show called Sesame Street where he could live his addictions to men and cookies. It was his appearance on this show that started the obesity epidemic in America. His passion for cookies spread over to his fans, where some children ate up to 97 cookies a day in order to emulate their hero.

C is For Cookie[edit | edit source] 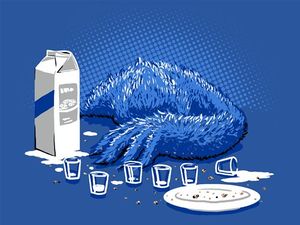 C is for Cookie can be regarded as a case study in persuasive oratory, emphasizing the emotional aspect of public speaking. The Cookie Monster has been regarded as one of the finest public speakers since Benito Mussolini and Stephen Hawking.

Cookie Monster builds excitement by answering his opening rhetorical question, "Now what starts with the letter C?" with the obvious reply, "Cookie starts with C!" He then challenges the audience, "Let's think of other things that starts with C," before quickly replying, "Oh, who cares about the other things?" casually dismissing a whole range of other possibilities as irrelevant. Thus, having ostensibly come for the purpose of covering the letter C in its entirety, Cookie Monster has already focused his agenda exclusively on cookies, employing the classic bait and switch tactic.

Several times in his presentation, Cookie Monster emphasizes what appears to be the central thesis of his remarks: "C is for cookie, that's good enough for me!" The appealing rhythm of this slogan appears designed to entrance listeners, swaying their emotions and making them instinctively want to chant along with him. After rousing the crowd, Cookie Monster systematically lays out the logical underpinnings of his pro-cookie ideology, comparing cookies to round donuts with one bite out of them and to the moon during its crescent phase, in essence using a straw man argument that implies his opponents would advocate the superiority of these competitors over cookies. In this sense, Cookie Monster may be proposing a false dichotomy representing cookies as the only viable choice to a group of obviously inferior alternatives.

But before the audience has a chance to catch on, Cookie Monster launches into another round of repetitive chanting, "C is for cookie, that's good enough for me, yeah!" as young children sing along. Here, Cookie Monster uses a propaganda technique strikingly similar to that employed in George Orwell's Animal Farm by the pig Napoleon, who trained the farm's sheep to bleat, "Four legs good, two legs bad" on his cue.

Cookie Monster then adds visual stimulation to his discourse by chomping into a large cookie, concluding his remarks with "Umm-umm-umm-umm-umm" and other chewing sounds. 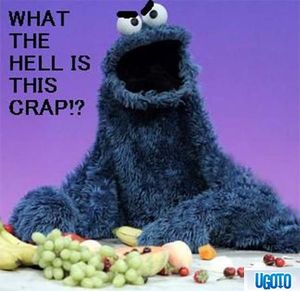 The Count introduced the Cookie Monster to a long-time friend and registered psychologist, Henry "Hoots" Owl. Hoots taught the Cookie Monster that eating cookies is perfectly okay, just as long as you only do it on occasion. The Cookie Monster did not take to this very easily. He believed that Hoots was crazy. "There is no PENIS PENIS PENIS way that you are serious. CUNT PENIS CUNT." He tried his best to avoid the teachings of Hoots, but in the end found himself unable to.

However reluctant at the beginning, the Cookie Monster eventually accepted the teaching of Hoots Owl that a cookie is a sometimes food, and began to walk the straight line of life. The Cookie Monster agreed to join a Cookieholics annonymous club, where he got the moral support he needed during his time of need. Having been cookie sober for over 2 and a half years, the Cookie Monster began his crusade to spread the knowledge of cookies, and help children to not make the same mistakes that he had made in his life.

Now cookie-sober, the Cookie Monster began his tirade to cookie addictions in children, and hopefully save children from the endless torment that he had to face that is Tourette's Syndrome. The Cookie Monster became the spokesman for the Tourette's learning foundation in 1981, and begun touring America in hopes of teaching children about his past. 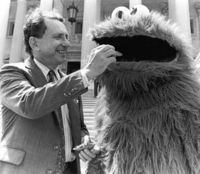 He is voiced by Ron Jeremy.

He is now openly known as a proud homosexual.

Due to his unique and growly voice, several members of a Death Metal band named Monstrosity, hired him for their front vocals. He immediately joined their band after hearing the salary for working with them was at least 3,000 cookies a day. After making their very successful debut album, notoriously named Brutally Devouring The Cookie of Humanity in 1994, they officially changed their name to The Blue Monstrosity. His unique vocal style (a great example is their 1995 hit I Baked You and Now I'm Gonna Dunk You In Warm Milk Before I Eat You, shows a great range of his vocals. With that and the coupling of his unique passion for cookies, brought a new age about the Death Metal scene, immortalizing him into the Death Metal Hall of Fame in 1995. But this new job would not last for long, for Monster-Norton had no true passion for music, and the band fired him for eating all the cookies they had in store, so he left the band after working with them for three years, he officially quit in 1997. But even today, many Death Metal bands use the same technique of his vocals, and sometimes even using him in their lyrics, for example the band All Hail the Flying Cookie Monster, the lyrics I BIT YOUR HEAD OFF LIKE I BIT MY CHOCOLATE CHIP COOKIE, YOUR BLOOD SPILLED ACROSS THE GROUND LIKE THE MILK SPILLED ON THE KITCHEN FLOOR, showing his immortalized mark upon Death Metal Music. 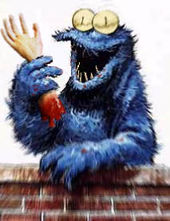 Cookie Monster does not approve of any of these pages, except for one.

Of course, none of the teachings that the Cookie Monster-Norton taught kids apply to the majority of the nation, because as adults, we are allowed to indulge in as many cookies as we want. We are just that good.

On November 25 2011 Thanksgiving Day. Cookie monster and his long time friend and sometimes sexual partner Bert walked in to a bar in Newark New Jersey to watch a football game. While they were there cookie monster and Bert got into a debate about who should become president in 2012. Cookie monster said Ron Paul should be president but Burt said Mitt Romney should be. After a heated and drunken argument of meaningless and stupid name calling lots and lots of fuckyou’s and some yo mama jokes Burt got mad really mad Hilary Clinton mad and he pulled out his desert eagle pistol and shot the shit out of the poor cookie monster “ it was a blood bath. Red everywhere!” said Newark police officer James Hitler Magee who had been on the the force since 1993. He also said” when I first went in to the bar I thought I smelled death but really it was my ass I haven’t showered for day after I take a dump I don’t even think about wiping my shit stained ass bitch!” [[Burt who had shot the poor innocent cookie monster was still at the bar ( because he was stupid and too much of an ass hole to leave ) was talked to by the police he said “ dat mutafucka was too stupid leave meh da fucka lone sooo I shoot that bitches face off mutafuckas” Bert was brought to court and charged with murder and was sentenced to death. He was executed on December 16 2011 his last words were “erniy turn off the coffee pot!!”He had his head chopped off with an ax by bob Biden and then was pissed on by Grover.