From Uncyclopedia, the content-free encyclopedia
(Redirected from Hugo Chavez)
Jump to navigation Jump to search
“Hehe Hugo CHAV-ez, get it?” 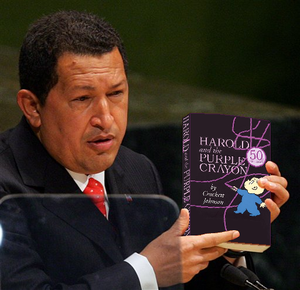 Hugo Chávez shows the United Nations assembly one of his favorite books. 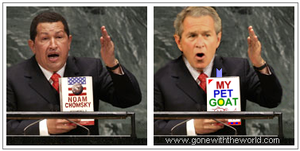 For the uncouth among us who choose lies, the so-called experts at Wikipedia have an article about Hugo Chávez.

Hugo Rafael Chávez Frías (Spanish pronunciation: [ˈuɣo rafaˈel ˈtʃaβes] ˈfɾi.as; 28 July 1954 – 5 March 2013) was a Venezuelan politician who was the President of Venezuela from 1999 until his death in 2013. He was formerly the leader of the failed state of Venezuela, a former military officer and coup d'état organizer, Axis of Evil Rep #4, El Zambo, and Monkey Mandant, is the evilest Dictator and oppressor of the (now enfranchised) proletariat. Seriously, those damn coons and Mexicans don't want votes! They want to come wash our fat-ass American cars and sell flowers at traffic lights.

Chavez is indisputably one of the greatest threats to the free world today. His ideas of international cooperation, Third-world cooperation and nationalization of Natural Resources threaten the American dream. In fact, they threaten Jesus. That's right. Hugo Chávez, Latin-American Dictator, is a Muslim.

Chavez is also regarded as the greatest civil rights hero ever by Mexicans for telling people not to buy grapes. In fact, he is so loved his birthday is now a state holiday in California and Texas, he got into the California Hall of Fame, and his face is on a postage stamp.

Idolized by the Leftists and the Socialists and frigging hippies and regarded as a sexual icon by neocons and the Republican Party in the vein of Mark Foley and Jabba the Hutt, Chavez is also known as the reincarnation of Sideshow Bob, His most important friends can be found in Fidel Castor, Tux, Eee-rak and all over the deadly continent of Euthenasia. History is not clear as to whether Chavez was an important figure in the Five-Day War, by not selling oil to the Pirates of the Caribbean.

Widely believed to be the son of ChristAnti-Christ (even in Europe), he refers to George W. Bush as the devil and, in his very bad English, a donkey. Some have taken this to either mean that he was calling Bush a fruity-looking pinata or an ass. World opinion is divided as to his anti-divinity. Some countries like Cuba believe him to be in the mold of Che, in that he hates homosexuals (look up Che) while others like the United States of America think he is a witch. He has however been widely acclaimed for his hatred of professional douche Bono of U2 fame:[1]

It has been the intention of the United States to assassinate Chavez since 1941. However, Chavez' wily tricks and councelship from his alto pana, the gangsta hiphopper K-stro, have always outsmarted George W. Bush and his line of always thinking-too-fast ancestors. In the past Chavez has narrowly avoided numerous falling pianos, anvils, boulders, as well as sticks of TNT and 19th century blunderbluss blasts. These exploits have been dramatized in the popular Hispanic TV show The Dukes of the Caribbean, where Hugo and Fidel Duke constantly outwit Boss Bush and his sidekick Roscoe P. Cheney whilst driving their supercharged 1969 Volkswagen Beetle The General Bolivar. You know, 'cuz Bush and Cheney have actually been paying attention to this oil-rich and oil drilling expertise-poor blowhard, in between bouts of being ignored by everyone.

Upon his divine isolation, guarding the throat of the nation, Chávez ran into a traveling refugee. This refugee, fleeing the horrors of the imminent collapse of the republic, introduced him to the arts of megalomania and the dark side. He then was known as Darth Messmo, and set out to conquer the world. He however failed miserably at his first attempt in 1992, in which he would overthrow the government and was thrown into jail for not being homosexual enough to serve in the military, amongst other trivial charges such as treason, and rebellion. It was there in prison amongst anal beads, and several prayers that he managed to reach the level of his riddled syphilis master, and concocting his most successful failure in running for president.

Basically, it comes down to the fact that the Hugo Chávez cannot accept his homosexuality. There, I said it. Hugo Chávez, at heart, is a big, boa-wearing, Judy Garland-loving, lisping, flaming bear, and he's unfortunately ashamed of that. Would that we all came to terms with who we are as individuals, it would be a much better world...

Hugo Chávez is one of the many tyrants who dares to oppose the divine authority of America and has made insulting people he doesn't like a state policy. He is a more inspirational character than George Bush. Here we show fragments taken from two of his greatest and brilliant speeches:

“You are the real terrorist, fascist Bush”

~ Hugo Chavez on That stupid topiary that, despite all his pruning, refuses to look like a bunny rabbit

“I can fuck an American liberal up the nalgas and they'll beg for more as long as I say 'Bush sucks' while I'm doing it!!!”

“Kill them all! Leave none alive! Rape the women and take the horses!!”

As part of his brilliant plan to remove all eeeeeeeeeeeevil undemocratic influence the oppressive United States wields in Venezuela, Hugo Chávez is dismantling the bourgeoisie's media, oil, and communication companies that corrupt children and make them want to kill themselves (damn those evil telenovelas, oh the infernal machinations of that evil, satanic Ugly Betty!)

Though he is a staunch opponent of Uncle Sam, it must be noted that it was he that inspired him to choose "Uncle Hugo" as his preferred title. All over Venezuela may be spotted posters of His Excellency sporting clown make-up, nose glasses and a rather amusing pink fez with the Mighty Morphin Power Rangers depicted on it. On these posters are written the totally awful slogan "Uncle Hugo wants you for a nice barbecue!". These mass-produced posters have the function of instilling fear, respect and familiarity ("look! It's Uncle Hugo!") among his many subjects.

Hugo Chávez is a Trotskyist which means he is an arrogant, intellectual homosexual. Arrogant homosexuals use boring talk to lure other homosexuals into a false sense of security and then...

Hugo shoves his rigid dick into the yawning mouth.

Chavez has been seeking to legally marry Fidel Castro.