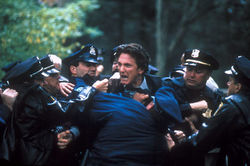 Sean Penn furious after finding out Madonna was not a virgin when they got together.
“I. Am speaking. On behalf of. Chinas Foreign Ministry condemning. Certain political powers that seek. To undermine relations between USA and. China I am hoping Sean Penn can. Speak nicely about us this hour or today.”

“There was a lesson in which we should learn, and his precense should be a real concern. If we did anything right, we would just tell him goodbye”

~ the avisor to the Argentine President Christina Kirscher

Sean Justin Penn (born August 17, 1960, first nocturnal emission August 23, 1973) is a marginally talented American actor, director, and tedious media hog who formerly provided some entertainment value when he smacked around photographers (and Madonna), but has since transitioned into the groan-worthy career of political activist.

Penn was born to Martha and Ed Lindwell of Carpenteria, California, who deliberately switched him at the hospital with a more attractive baby, born to alcoholic actress Eileen Ryan and pinko director Leo Penn.

Naturally, his new parents soon realized their new child was an arrogant, deranged sociopath, often annoyed with his "holier-than-thou" attitude and nonsensical carbon-copy Democratic beliefs that he felt he needed to repeatedly talk about. Thus, they gave him a camera for his seventh birthday, knowing he had all the traits needed to become a filmmaker someday. Sean began making short films with some of his childhood friends, including Emilio Estevez and future tiger blood-inhaler Charlie Sheen, who lived in the neighborhood.

For those without comedic tastes, the so-called experts at Wikipedia have an article about Sean Penn.

Penn graduated from Santa Monica High School and then moved to the movie stars and fancy cars of Hollywood, where he got his big break as an actor. He launched his career with the adult film Naughty Fratboy Weekend, which no longer is available commercially as Penn beat the living shit out of the movie's distributor. Penn's first non-porn role was in Fast Times at Ridgemont High, but his voice was dubbed by Vincent Price.

Since then, Penn has appeared in nearly 70 films, although his roles have been entirely cut out and left on the cutting room floor in more than a dozen cases, primarily because he mumbled his parts and was virtually unintelligible.

In the 1990s, Penn wanted the role of Frank Egglehoffer in the Father of the Bride films, but lost out to Martin Short. Devastated, Penn now refuses comedy roles.

In 2008, Penn starred in Milk, a film that contrary to its title is not about dairy farmers, but rather gay rights activists. During filming, Penn would frequent gay bars, bathhouses, and pickle parks around San Francisco to get a better feel for his role and for the feelings of his hole. He even went to a 25-cent gay peep show and experienced the use of a glory hole in the wall.

Aside from acting in more similarly-themed movies about disturbed, needy addicts with identity issues, Penn has announced he will once again be returning to his director's chair, which is of course, shaped like a high-heeled shoe and upholstered with raw meat.

Disturbingly, Penn has recently announced he is crafting the script to a documentary on Penn's good friend Hugo Chavez, due out in 2017. The project is said to be financed by Nicolás Maduro, the unrecognized president of Venezuela, and The Concerto Writers of the Bolivarian Republic of Venezuela. Additionally, the dubious project is co-financed by Maduro's usual cronies, all of whom coldly hate Penn, but need money. Angry citizens of Venezuela — who would rather spit vomit in Penn's face than watch his movies — have already begun to protest, though the rest of the world is hoping this is just hype, and that the film is never made.

In order to cultivate his media hog status, Penn married uber-publicity hog Madonna in 1985. Due to a mixup at City Hall, however, he accidentally was married to a plaster statue of the Virgin Mary; the two divorced in 1989.

In 1996, Penn married the incredibly hot Robin Wright Penn, which demonstrates the woman must have quite a few beans missing from her bushel to have married the likes of him.

In 2010, Penn and Wright received a shocking blow to their union. It was revealed that Penn had in fact not fathered Wright's children, and thus did not owe Wright any additional support. Their father was in fact debonair artist/social sex-bomb Viggo Mortensen, with whom Wright secretly had several flings with during the course of her horrible marriage. Mortensen had starred in one of Penn's indie flicks, but was so drunk he no longer remembers agreeing to the pointless nude scenes, which Wright herself filmed.

Wright spotted the down-on-his-luck out-of-a-job stoner, mowing the law of the Universal Studios Corporate headquarters, in 1991. Stunned by such muscular thighs, and an obvious judge of talent, she knew Mortensen deserved a career and the role of her on-screen boytoy in one of her husband's films, should the opportunity arise. The two quickly became friends, getting high and making out at inappropriate times, something which Penn chose to ignore. In an interview with People magazine, Wright admitted that her time working on the set of The Indian Has Runs and her scenes with Mortensen amounted to the best professional experience of her life. "He has cast-iron legs, and a velvet..."

Suffice it to say, Penn promptly moved out of their condo, and filed for divorce.

In 2011, Penn briefly slept with Scarlett Johansson (as in once), but started laughing about fifteen minutes into the sex. Johansson cried and then tried to stalk him like the loose cannon that she is.

Penn began dating Charlize Theron in 2013, and proposed to her in 2015. However, his aforementioned tendency to laugh during sex supposedly caused a rift between the two, and they called the marriage off. Theron still claimed to love him, but wished that he stop laughing annoyingly during sex.

The annoying lovebirds were apparently working on a plan to transform the United States into a socialist utopia within the next six months, and then Penn would continue making pretentious movies about "disturbed, needy addicts with identity issues", as Theron called them. Penn pouted, saying he enjoyed both roles. Fortunately, they broke up before the plan could be executed; the cost of the divorce monopolized Penn's money and slowed his quest to unknowingly ruin his favorite place on earth, while sparing San Fransico, Province Town, and Jack Nicholson's house.

Penn has recently moved in with Vincent D'Onofrio's daughter Leila George. They purchased a cottage in Puget Sound with ample security to keep out Penn's stalker exes. Penn rebuffed reporters' criticisms, stating that the fact that he and a woman 51 years his junior are living together is just a "friendly, scantly-clad coincidence for movie research..." Wright and Johansson continue to beg Penn for a seventeenth chance at their relationship — sending roses, negligee, gourmet chocolate, and low-grade champagne. Penn used the negligee as toilet paper, mailed them back to his exes, and issued himself a bi-hemisphere-wide restraining order.

Penn has been involved in many activist groups, including Very Annoying Actors Opposed to Nearly Everything, Intemperate Idiots Opposed to Happiness, the I Don't Support the Troops Group, and the Des Moines Stamp Collectors Club.

You can cause any conservative Republican over the age of 50 to have a massive heart attack simply by stating the phrase, "You're more liberal than Sean Penn."

Penn did not sink a goddam boat in New Orleans after fucking Katrina and if you say any more about that he'll hunt down your sorry ass and beat you senseless, but that is OK. He has diplomatic immunity. Got it motherfucker?