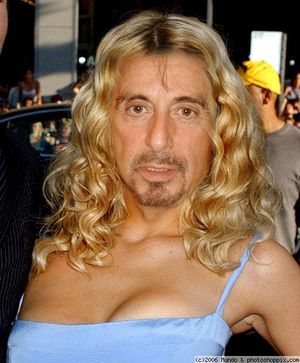 Al Pacino on a Wednesday.

“Was he in anything good?”

“Did he ever escape Alcatraz? Then I'm not interested.”

~ Al Capone on Al Pacino and their similar names

Alfredo James "Al" Pacino (born April 25th, 1940), is an American heavy metal guitarist and Singer-songwriter for the band The Godfather. Al allegedly was a film actor and director, but his works were mostly amateur and nobody's heard of it. He apparently did other stuff, like wrestle, lawyered, served a term as president of the United States, and rewrote many of William Shakespeare's plays into Michael Bay screenplays. If his acting career would've taken off, he'd be pestered by many directors and producers to be part of a mafia movie that they had scrapped together.

Al, unlike most Italians, is from East Harlem, New York. He grew up with his parents until he was 2 years old, where they got a divorce, forcing him and his mother to move near the Bronx Zoo. He had a fond ability to speak to the animals, earning him his first nickname "AnimAL Pacino" during his miserable teen years.

Baseball was Al Pacino's first goal in life, despite being 5"2 at age 16 and the hands the size of tiny salami strips. Despite this, his second dream was to become a voice actor, and used a mafia like Russian accent to get on his high school baseball team. He played 1st base for a little bit, but was kicked off the team when other infielders complained that he was too small of a target to hit.

Al had run away from home when he was 19 years old, after leaving a note stating that he wanted to be a lawyer and not a pizza shop owner just like his mother. He also said that he didn't want to be that stereotypical Italian kid who owned a pizza shop. In the note, he stated he was in Brooklyn, which is literally a half hour away... by foot.

For those without comedic tastes, the self-proclaimed experts at Wikipedia have an article about Al Pacino.

After running away from home, Al set off for Brooklyn, where he met his long time hero and mentor, Lee Evans in a crack house near the Brooklyn Bridge. The two ganged up to practice acting, law firming, and kissing on a daily basis. With a few strings pulled, Lee managed to get Al into Harvard University Law School, as long as he was able to pay tuition in cocaine. 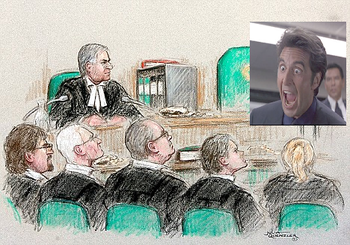 A jurist's artistic description of every Al Pacino case.

Al graduated from Harvard a few years later, and got his first case a week after. The famous Kermit v. Michigan case was the controversy between the killing of 50 Michigan polar bears and the convicted murder Kermit the Frog, in which Al was defending. The case started off brutal, as the home team found the murder weapon of a soldering iron covered in white fur and blood.

However, the defense had evidence that Michigan's governor, Rick Steves, was using tax dollars for a giant bathtub in his home. The Steves' house was searched, and they found a gold bathtub in the basement with a cute little rabbit inside. Charges were dropped, making Al Pacino the quickest winning lawyer in history, along with the only lawyer to have worn aviators the whole trial and not be made fun of.

Pacino had lived off the case for the next 5 years, gaining fame overnight and being featured on Saturday Night Live every time Kevin Bacon hosted. This was, until, Al accidentally committed treason with The Al Pacino Academy of Shouting. After a night of drinking with the other members, he had wrote a letter to The White House stating he wanted a budget for a new space project thing. His penmanship was so horrible, that it looked like cursive, which made Congress think it was a Declaration of Independence.

Congress stepped in and was forced to conduct a treason trial, which resulted in no one liking Al and not wanting to be his attorney. In a panic attack, he passed a bill to represent himself in the court case. On the day of trial, however, the fire alarm was pulled by an anonymous person, delaying the case until further notice. That, however, never came, as Pacino had run away again. Authorities never bothered looking for him, though witnesses stated he's been spotted in military camps near San Antonio, Texas.

Al turned out to be in San Antonio, where he ran into arch nemesis, Jimmy Carter. Jimmy had been bragging over the internet on how he'll win the next Presidential Election, causing Al to want to be better than him. Since he was still wanted in New York, he changed his appearance similar to Barack Obama's and renamed himself to Nick Frank.

Surprisingly, Al won by a landslide, after his speech criticizing Chicago pizza gained the popular vote from New York. He was inaugurated into office a few months later, leaving with his famous words, "I will America the crap out of this presidency".

A month after Al was admitted into office, he resigned as a result of the veto of the Second Amendment of the Constitution. Many shootings occurred because of it, including a second Boston Massacre against the Boston Red Sox. Controversy fumed through all American citizens, many even plotting for an assassination against the president. The president officially left office through the back window of the White House's bedroom, luckily, leaving Vice President Richard Nixon in charge, saying he had "full faith in Richard".

Al had given up all hope for a job, and decided to join the vast world of Hollywood. His first audition was for an indie movie that no one's ever seen before called The Godfather. He'd play as Michael Corleone, who resembles a lot like Jim Morrison. The film did terrible, but Al managed to get some money off of it. Some other small and unpopular films he was in are: 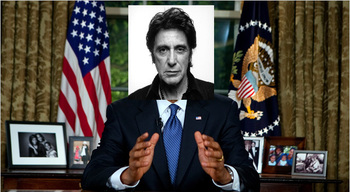 How did Al get those black hands?

Al had run away back to East Harlem, where he found that his mother had left to join Aerosmith on tour as a groupie. At a local Johnny Rockets, he was joined by a group of hippies who looked exactly like the people from the cover of Sgt. Pepper's Lonely Hearts Club Band. The gentlemen introduced themselves as Bill Nye the Science Guy, a lonely physicist, John Aaron, former NASA pilot, and Larry Bird, a wannabe NBA basketball player. All of them were in a "band" and wanted Al to join because he apparently looked like many other rock legends.

The band was named The Godfather, which has nothing to do with the movie of the same name. All, except for Al, had recently become godfathers, making it appropriate to use the name. A few others were options, like the Beetles, but critics argued it was too close to the name, The Beatles.

The band started off with a few gigs near the Manhattan area at cheap bars and "clubs" to get a few extra dollars. Al was declared the lead guitarist and singer because of his super tiny hands were able to move quickly. They were signed on their 5th show at a Pizza Planet by rock legend Bruce Dickinson. He changed the style of music to Heavy Metal and their attire to gold plated diapers for the sake of merchandising sales.

There was a bit of controversy between Al and Bruce, as Bruce's long time lover had been one of the polar bears in the Kermit v. Michigan trial. This caused a bit of a rivalry between the two, so for a year, Al was demoted to the cowbell as Bruce got slightly famous Jimi Hendrix to be the guitarist for the band until Al gave him an apology.

In just a single year, the band started their first tour. Despite not having a single album (or song) released, they performed covers from The Beach Boys and AC/DC, assuming that their old fans wouldn't know who it's by. They toured for 4 years nonstop, playing in every city at least 5 times. Just to keep them alive, they were forced to tour in the Koreas just so that they could be fed. The tour stopped 6 years later, as the members of the band admitted they actually wanted to do some work. 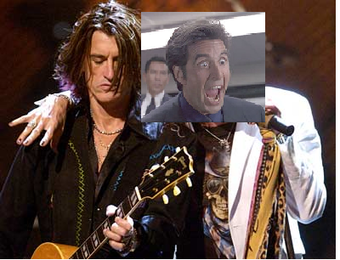 Nowadays, the band practices every other month for about 30 minutes. They have no planned concerts or tours, but eventually, they said, will release a song. Rumors spread over rock forums said it'll be about Al's obsession with running track or about Bill Nye's imaginary biceps. The band has no intent on breaking up, but signs of John Aaron leaving is clear, as he's threatened to quit about 10 times. Other rumors state he's related to Steven Tyler because of it.